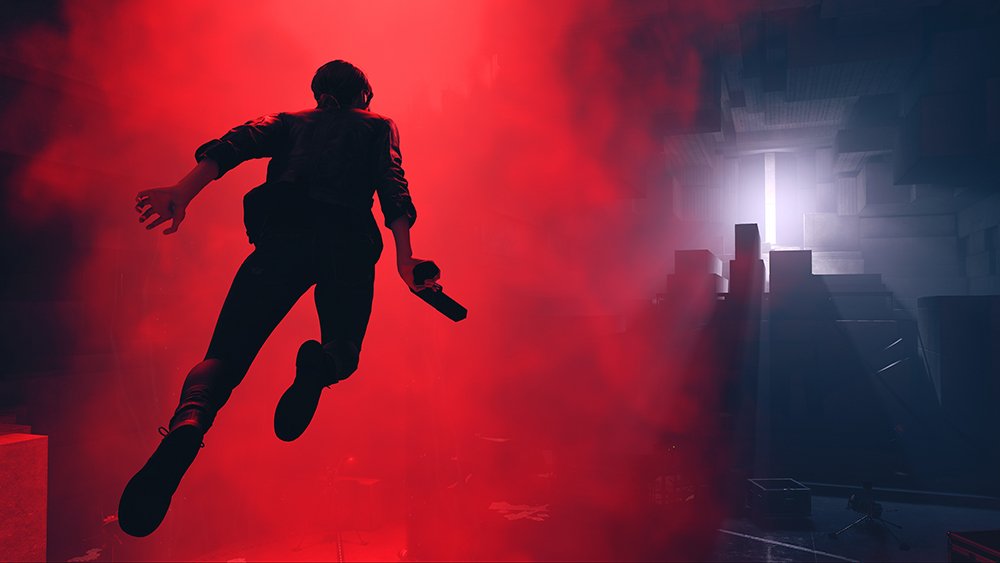 Remedy has always been an iconoclast in the game industry. The way that Sam Lake and the rest of the Remedy team see the world is entirely surreal. Quantum Break was their venture into a more mainstream experience and while they’re happy with the result of the game, they wanted to go back to their “weird” roots. The Finnish studio seems to be doing just that with its newly announced title, Control. GameDaily had the pleasure of sitting down with the game’s director Mikael Kasurinen last week during E3 2018.

“On a higher level, I think there might be a certain kind of hangover that we got with Quantum Break, which was more mainstream and a bit more in this world,” Kasurinen said. “But we loved doing Alan Wake way back. And I guess there was this energy and desire to go strange again. Go between, you know. To do something that we feel is exciting and different and something that stands out from the rest. We wanted to double down on that and create these types of worlds again.”

This world is unlike anything Remedy has done before. It hooks into an almost Lovecraftian atmosphere, digging its claws into the juxtaposition between ordinary and bizarre. And they didn’t start with Jesse Faden, the game’s protagonist, and her story. Instead, they turned the process inside out and started with the environment.

“Instead of just doing this one linear story that just starts and it ends and you're done — we wanted to turn that around a bit and start with the actual world,” Kasurinen continued. “What is the world that we want to create? We started talking to Sam about the house, what kind of location it is, how it keeps shifting its shape — it’s somehow larger on the inside than it is on the outside. It looks like a normal building, but once you go in, it seems to infinitely expand into all directions.”

Alan Wake’s approach to surreal horror — creating its own juxtaposition between reality and unreality — was an excellent foundation for Control to build on. It experimented with environmental horror that made way for the surrealist landscape in Control. But even with those roots to draw upon, there’s more to Control’s creative direction than looking backward.

“[Sam and I] read a book called 'Annihilation' and it features a ‘new weird’ literary style that is all about dealing with phenomena or things that are beyond human comprehension,” Kasurinen reflected. “It can take different aspects and angles into it, but it feels like the thing that you are observing is way more vast, wider than what you can understand. Sometimes, things even contradict each other. So, it's a mystery and a puzzle that engages you and you want to figure out what it is and why it is. And that's what we wanted this world to feel like. We want this to be a place that you want to return that, that you think about even after you're done playing. Like, the next day at work, we want you to think about it and [anticipate] your return.”

Not everything in Control’s environment is about the “new weird.” Lake, Kasurinen, and their team specifically crafted the world so that it was just enough of our reality to make it believable and immersive for the player.

“Immersion is important to us. We didn’t want everything to be strange and alien, [because] then there's nothing to relate to anymore,” Kasurinen remarked. “That's why we have Jesse, who is an outsider to this world. She has had her run-ins with the strange in her past and in her childhood, and she knows a bit about this organization, which we call the Federal Bureau of Control.

“They focus on researching, investigating, and containing strange phenomenon, dealing with the supernatural. It has this almost mundane, bureaucratic attitude where it observes this thing from the perspective of science. And then it sort of collides with the strangeness and the supernatural and that's what makes it exciting. It's the old versus new, truth versus lies, order versus chaos — and that's what we have with Jesse coming into this from the outside and seeing all of these things for the first time. When Jesse comes to this strange place, she feels like she's home. She's where she belongs. She feels this connection to everything that's happening.”

Control isn’t much of a departure for Remedy, at least in terms of its narrative flavor, but the studio has changed quite a bit since they started developing Quantum Break. Until then, they were a single project studio. Alan Wake and its subsequent DLC, American Nightmare, were of singular focus. That changed with Quantum Break’s tech needs, specifically with regards to their proprietary engine, Northlight Engine. They needed more people to pull together what they wanted to do for Quantum Break and Northlight. In order to do that, they broke the studio up into three distinct teams.

“We have a central technology group that provides all the technology that all the game projects use,” Kasurinen said. “Then we have the Control team. And then we have the other team that's working on a story mode for Crossfire, a Korean FPS kind of like Counter-Strike. It's been an interesting transition. We have had to take a step back and figure out what's the right way to do this and [ensuring] that the technology group can support all of the different game teams.”

It was surprising to hear that Remedy is working on the story for someone else’s game, especially because their approach to narrative is singular. It’s like BioWare taking on work-for-hire projects — it’s not something that you think about when you think about their brand. But Remedy has a bigger team to manage, and with a bigger team comes increased expenses. If they want Control to be a hit like Alan Wake and Quantum Break, they need to invest in Remedy’s infrastructure. Just like Nerve uses work-for-hire projects to keep the lights on, Remedy’s work with Crossfire is likely the result of shrewd business. And since Quantum Break didn’t sell as well as they’d hoped, a studio’s gotta do what it’s gotta do to keep going.

But is it enough to take on extra project work when what you want to do is build your own games? Knowing Remedy’s non-conformist nature — no, no it isn’t. The next best thing is to plan out Control’s roadmap. Kasurinen didn’t have much to say about what we can expect from Control’s lifespan, other than “this game is larger than one single story.”

“Even though you'll get through the main campaign [with Jesse], there's reason to do other things as well,” Kasurinen told me, almost conspiratorially. “It acts as a foundation and it's possible to expand [the narrative]. It's important to us to create more sustainable experiences and sustained engagement in [more ways] than our previous games.”

It’s unclear what Kasurinen means, but it won’t be the traditional DLC that we’re used to seeing from Remedy’s other titles. There’s likely no American Nightmare-like expansion in Control’s future. It could be that Control follows the modern games-as-a-service modality and embraces a more Anthem-like approach. Or, perhaps this is episodic. We won’t know for sure until we get a bit closer to Control’s launch date, which is currently unannounced.