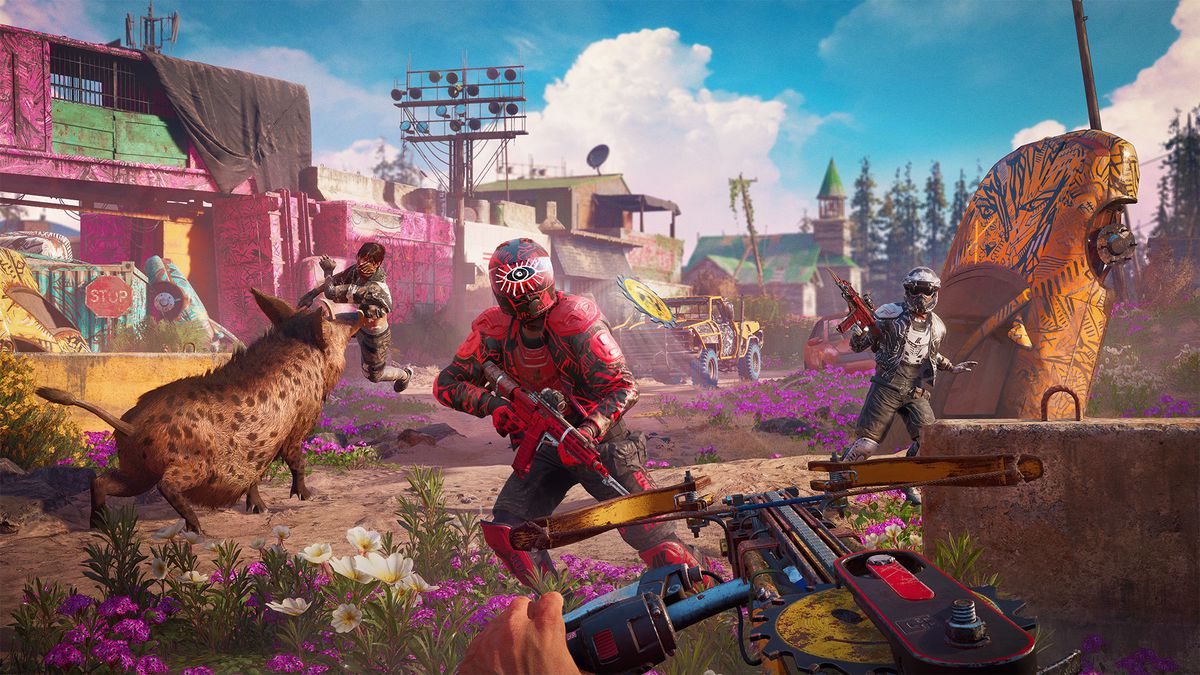 When Far Cry 5 released last year, it broke franchise records for Ubisoft. It quickly became the fastest-selling Far Cry game in the series, and earned a spot in the top ten best-selling games of 2018, according to NPD. Now, nearly a year later, Ubisoft has released a sequel that takes place in the post-apocalyptic landscape prophesized by Joseph Seed, Far Cry 5’s main antagonist.

A Far Cry experience comes with a host of expectations, such as enemy outposts to clear, animals to hunt, upgrades to craft, and a map to explore. According to reviewers around the internet, New Dawn adheres closely to the established formula and touts the series’ trademark tight gunplay, but does little to move the franchise forward in any meaningful ways.

In Jeff Marchiafava’s 7/10 review for Game Informer, he wrote “If you’re a longtime fan who is simply looking for more Far Cry, let me save you some time: New Dawn delivers all of the enemy-laden outposts, gory stealth kills, manic co-op, and compulsive item collecting that you’re used to, and the gunplay is still rock-solid. This entry is still fun, but if you’re looking for a game that moves the formula forward in interesting ways, New Dawn’s changes rack up more misses than hits.”

Marchiafava also decried New Dawn’s pair of villains as shallow and uninspired: “Unlike previous Far Cry antagonists, Mickey and Lou are irredeemably one-dimensional, their Very Bad personalities hinging on a solitary anecdote from their childhoods. Their delivery is equally formulaic – you can expect the usual philosophical monologuing (though mercifully less frequent than Far Cry 5), the random displays of ‘shocking’ violence in cutscenes, and the post-mission radio taunts that are never really explained how or why you’re hearing them.”

Despite the overall lack of innovation, New Dawn does attempt to bring a few new elements into the Far Cry fold. Most notably, unlockable player powers allow for some late-game superheroics. For his review 70/100 at PC Gamer, Christopher Livingston wrote “A set of five new skills introduced near the end of the game indulge a bit more ridiculousness, giving you fun powers like a double jump and limited-time berserker strength. The Far Cry games have always cast you as an army of one, but New Dawn turns you into a legit superhero.” The powers, Livingston said, are fun for a little while, but aren’t enough to inject new life into the series.

With a smaller map and fewer story missions than its predecessor, the scope of New Dawn is a fair bit narrower than Far Cry 5 according to reviews. For USGamer’s Mike Williams, this affords New Dawn some of the focus that Far Cry 5 lacked. “While Far Cry 5 had just above 60 main story missions and a ton of side missions, New Dawn has 22 story missions and 8 side missions in total. You can run through the whole thing in around 15-20 hours, which feels about just right,” Williams said. “New Dawn cuts away some of the bloat of its predecessor...to deliver a cleaner, more focused experience.” Williams gave the game a 4/5.

One of the biggest features touted by New Dawn is the ability to upgrade Prosperity, the player character’s HQ and base of operations. By and large, reviewers enjoyed this aspect of the game. “Having your very own base to upgrade is, without a doubt, ingenious and is exactly what Far Cry New Dawn needs to justify it being more than just a DLC,” wrote Zoe Delahunty-Light for GamesRadar.

“I really hope the upgradable base will become a staple in future games, not only for this physical indicator of progress, but also for the pure entertainment of seeing Specialists chatting to each other.” Delahunty-Light gave New Dawn a 4/5.

Rock, Paper, Shotgun’s Matt Cox was very keen on New Dawn, calling it the best Far Cry yet in his review. In particular, Cox praised the companion system that sees the player character accompanied by allies that can provide various bonuses. This system debuted in Far Cry 5, but it seems to have been polished up for New Dawn.

“I might not have had access to a silenced sniper rifle, but I did have access to an unhinged granny with one of her own: the companion system from the last game is back, although now you can only have one pal at your side,” Cox said. “Those followers also do nice things for you depending on how many people they’ve killed, like fixing your car or fetching thrown items. That granny has the advantage of being more useful for silent takedowns, for instance, but the disadvantage of not being a dog. Or a massive boar called Horatio.”

For GameSpot’s Edmond Tran, however, New Dawn’s use of soft RPG-like progression felt restrictive and limiting. “Early on, this can be annoying if you try to push the limits of the game in a way you're not meant to,” Tran wrote in his 6/10 review. “Heading too far into the map and needing to use up hundreds of bullets to take down a rank 3 bear you encounter isn't terrifying as much as it is silly, and eventually, the demands of story missions will stop you from going too far.”

All told, Far Cry New Dawn’s reviews have been a mixed bag. Some, like Marchiafava and Tran, felt the game was limiting and uninspired, while bringing nothing new to the table. Others, like Williams and Delahunty-Light, praised the progression system and tight gunplay. From a business standpoint, Ubisoft likely has a critical and financial boon on its hands with New Dawn. Following a stellar Q3 report, interest in Far Cry seems to be at an all-time high. New Dawn has yet to figure into Ubisoft’s sales numbers, but it’s safe to expect a positive return.