Paradox turns Surviving Mars into a Mod, Mod World on Xbox One 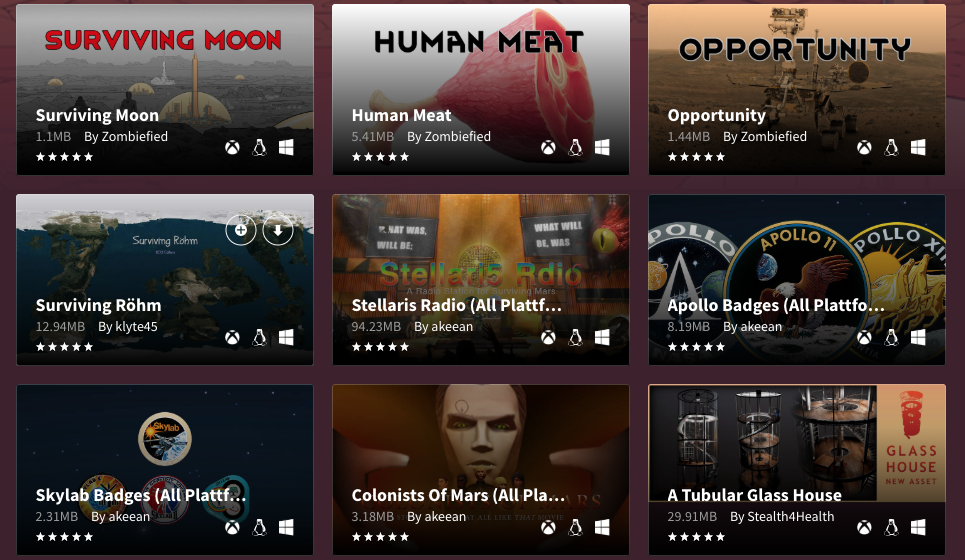 Today, the Stockholm-based company known for grand strategy games like Crusader Kings, Stellaris, and Europa Universalis is increasing its support for console gamers. Paradox Mods, a platform similar to Steam Workshop that enables user-created mods, is now available on Xbox One.

Surviving Mars is the first game to benefit from Paradox Mods support on Xbox One. As of publication, there are nearly 100 mods available for the title, all of which include console support. These include quality of life additions, new buildings, and the ability to use colonists as food in true Muskian fashion.

The latest update also includes keyboard and mouse support, bringing the console experience more in line with the PC version. This likely lays the groundwork for the upcoming release of Stellaris, a grand strategy game set in space, due on Xbox One and PlayStation 4 on September 26. A number of add-ons are already available for PC and Linux versions of that game on the Paradox Mods platform, and Paradox says that support is planned for other titles.

Another Paradox-published game, Cities: Skylines, also has mod support on Xbox One. However, the support isn’t through the Paradox Mods platform. Instead, creators must submit their content and wait for approval before the add-ons. With Paradox Mods, creators can simply publish their content across platforms. Anything violating the publisher’s policy will be flagged and removed. Shifting the moderation process means players on Xbox One can tap into community content faster.

“Modding has been, and remains an important part of the Paradox community. As we have diversified the way we distribute our games, we want to make sure all our players can take part in the creation process,” said Anders Törlind, Product Owner for Paradox Mods. “For Surviving Mars, we have worked with mod creators to support Paradox Mods with some of the best mods available, all in one place and downloadable in-game or simply using a web browser. We really look forward to unlocking the world of modding for all members of our community, regardless of what system they are using to play our games.”

Microsoft has been more adventurous than Sony in allowing user-created content on its platform. Bethesda made news in 2016 when it turned on mod support for Fallout 4 on Xbox One. Sony was slow to agree, but finally relented. Mods are now available for both Fallout 4 and Skyrim: Special Edition on both Xbox One and PlayStation 4.

When Sony did finally allow Bethesda to implement mod support, it came with a caveat. “You will not be able to upload external assets with your PlayStation 4 mods, but you will be able to use any assets that come with the game, as most mods do,” Bethesda explained.

This could be a stumbling block for Paradox Mods, as a number of Surviving Mars add-ons do include assets not found in the base game. The difference in perspective on user-created add-ons between Microsoft and Sony could be leveraged as a competitive advantage as we head into the new console cycle. This is in-line with how Microsoft approached cross-platform gaming, giving players more options and creating a more open environment for developers and consumers.

As Microsoft looks for ways to differentiate itself in the console space after a generation of underdog status, eyes will be on how Sony responds. Will newly appointed president and CEO of Sony Interactive Entertainment Jim Ryan continue to downplay fan-favorite features like backwards compatibility and cross-play, or will he adapt to a console market that is growing ever closer to PC gaming? The stage is being set for the upcoming console hardware refresh, and every feature advantage will count.