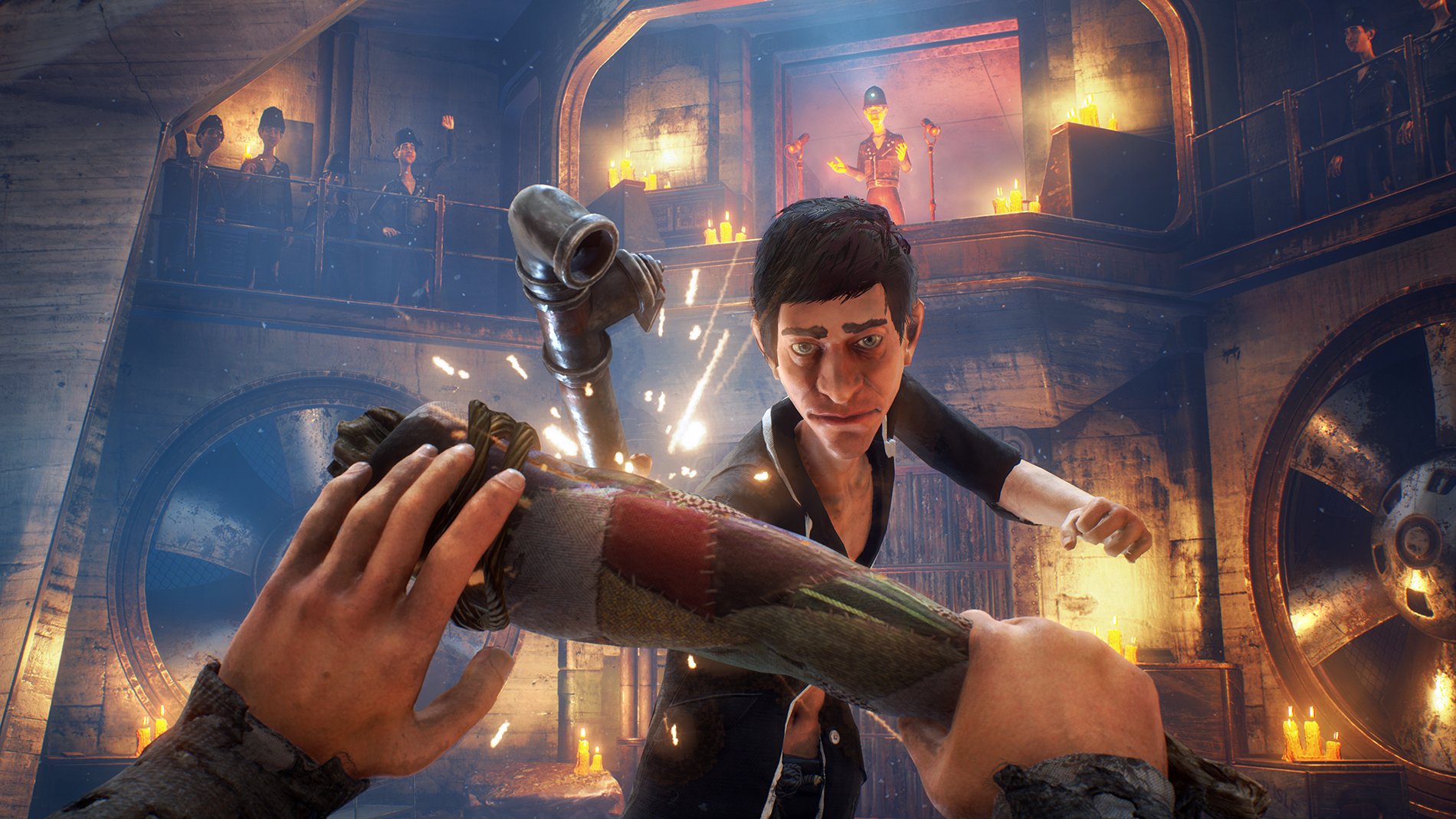 We Happy Few isn’t the game I thought it was going to be. When I first saw it in 2016, it was a scrappy procedurally-generated roguelike built on a forced utopian society that was equal parts creepy and stylish. I sat down and played through an hour-long demo during this year’s E3 and was surprised to find how far it had wandered and how much better the experience was because of it.

The game is set in 1964, in a city located in the southwest of England called Wellington Wells,. In 1933, this world deviated from our own, and the Germans successfully invaded and occupied England during World War 2. Most of England is rubble, as is a fair part of Wellington Wells. However, during the Occupation, the Wellies all had to do A Very Bad Thing. To calm their anguish and guilt and forget what they’d done the Wellies invented Joy, the miracle happiness drug.

The demo that I played through allowed me to take up the mantle of a young man named Arthur. Arthur had been living a posh life in Wellington Wells until something happened that took away his ability to feel the effects of Joy. The locals branded him a “Downer” and cast him out to live with the Wastrals — other folks who either opted out of taking Joy or they took a bad batch of Joy and were rendered immune to its “feel good” effects.

Things have changed in Wellington Wells and for its development studio, Compulsion Games. When I first spoke to co-founder Guillaume Provost back in 2016, their team was pretty small. They had been focused on slowly peeling back the layers on We Happy Few to figure out what they wanted it to be. The team, originally only seven, grew significantly after Provost and the studio’s art director, Whitney Clayton, determined the direction they wanted to take this new title in. Once Contrast was finished, launched, and well on its way, Guillaume asked Whitney what she’d like to create next.

It was a "Brave New World" dystopia that won out, with heavy British mod influences from the 1960s. Early conceptualizing meant flying out to London and capturing bits of inspiration from homes that hadn’t changed much since the swinging ’60s. But it wasn’t until the first live shoot with Uncle Jack, the TV personality that you can see peppered throughout the game, that the team had a definitive tone and mood for the game. We Happy Few has also pulled significant influence from, of course, Aldous Huxley’s "Brave New World", "A Clockwork Orange", and a number of films from the 1960s.

But this iteration of We Happy Few isn’t what they originally set out to build. Where the narrative was meant to be light and unintrusive so that the player could define their experience, it’s now upwards of 30,000 words of dialogue scattered through a densely populated world. This was the result of an active Kickstarter community providing feedback during the early access period on Steam.

I talked to Alex Epstein, narrative director on We Happy Few, about how Compulsion Games and We Happy Few has evolved over the last couple of years.

“We did a Kickstarter primarily to get a group of committed players who would tell us what we did well and what we did badly,” Epstein said, perched in an egg chair in a room across the hallway from the demo I’d just played through. “And what they told us was, these wacky encounters with the wacky people, we want more of those, please.”

"You can make connections between characters, between situations, and can tie things into the theme that weren't originally tied into [it] that comes out seeming like it was almost intentional."

That’s how We Happy Few ended up with a heavier narrative than was originally intended: the community was hungry for story, not just for the world itself. As interesting as the original concept was, it wasn’t enough to wander around and build a narrative out of what felt like a threadbare world. So, Epstein was asked to give the world more color and depth.

“We've been building crazy encounters and deepening the narrative [as a result],” Epstein continued. “And one of the cool things about working over a game for this long, is you discover connections. You can make connections between characters, between situations, and can tie things into the theme that weren't originally tied into [it] that comes out seeming like it was almost intentional.”

Intention is important in games that deal with the heavy subject matter that We Happy Few dives into: drugs, trauma, isolation, and visceral memory of Very Bad Things. In 2016, the game felt every bit as subversive and rebellious as it does now — but the narrative is much more robust now. The Australian government has been refusing to certify We Happy Few because of its use of drugs, claiming:

“In the Board’s opinion, the game’s drug-use mechanism of making game progression less difficult, constituted an incentive or reward for drug-use. Therefore, the game exceeded the R18+ classification because of the drug use related to incentives and rewards."

"I think we're all trying to make a game that will stay with people for a long time, so memory and denial is a universal human truth."

We Happy Few’s drug usage making the game “easier” isn’t necessarily about the drugs themselves. In fact, it’s more closely aligned with the way Dontnod Entertainment’s Vampyr handles difficulty — you can make the decision to munch on the locals to level up faster, but there are consequences to contend with as a result. Taking drugs in We Happy Few isn’t a reward mechanism, per se. It’s to forget.

“Memory is half a product of emotion and we pretend that it's not, but it is. And we have all these proverbs. ‘History's written by the victors.’ And then you have all the people in the South who're saying that the Civil War wasn't about slaves. So people all remember things in ways that suit them. I think even if we were not in the political times that we're in, it would still be true. It never happened but it's true.”

“Deepening the narrative” as Epstein said wasn’t the only challenge that Compulsion had to scrap with. They transitioned the game from a roguelike to something entirely different, while grappling with the realities of growing the team and partnering with a publisher, in addition to managing a thriving Kickstarter (and early access) community.

“When we had a small team, some of the programming was suitable for the kind of game that we're making, but it wouldn't necessarily be suitable for [what we’re building now],” Epstein reflected. “We [were] bringing on new programmers who [were] saying, ‘Oh god, why'd they do it this way?’ We've spent a lot of the past few months trying to make the game small enough to fit on an Xbox, which was really not a challenge we'd expected to have.”

The roguelike that Provost was so excited about in 2016 was supposed to be incredibly small, as each piece of the map was to be procedurally generated — it was never meant to be a game that employed a more linear narrative. And so, with the ramped up narrative structure, We Happy Few wasn’t a tiny game anymore. And neither was Compulsion. They grew from 7 people to 40, which meant that the way they made decisions had to evolve.

“We always had a very flat management structure,” Epstein said. “And the strategy has always been to hire people whose work [we] like and then kinda let them do the stuff that they like to do. As [we] [hired] a bigger team, we needed to structure that more.”

Flat management works really well with small teams, because everyone has equal say in where the game goes and how decisions are made. It creates transparency and trust. But when teams grow, the buck has to stop somewhere, as the old business maxim goes. Without clearly defined roles and boundaries, even if they’re loose, it turns into a creative free-for-all where nothing gets done. And when nothing gets done, crunch becomes a real problem.

But not at Compulsion Games.

“We just don’t do it,” Epstein said firmly.

A number of game studios have taken a stance against crunch, especially with studies like this one from game industry mental health advocacy group, Take This. But even with all of the uncertainty and extra work that bubbles up as a result of changing directions with a game, Compulsion refuses to entertain crunch.

But Epstein believes that work doesn’t end when we clock out of our respective jobs, especially as creatives.

“I think most really good creative people, and I include programmers in that, your off hours are often times where you think. And you go, ‘Oh, I didn't have to do it that way!’ I know as a gamer, I'll get stuck on a level and I'll be fighting and fighting and I'll put it away and I'll lie down in my bed and go, ‘Oh! Right! That thing! Yeah, I shoulda done that!’ It's the same thing with making a game. The downtime is work, as well.”

There’s a beautiful oddity to We Happy Few that has stayed constant through every iteration I’ve seen. It has just enough realness mixed in with the aesthetic that it feels both disconcerting and engaging to wander through the lush landscape outside of Wellington Wells.

“My experience [on We Happy Few] is a strange one because I've been writing for 30 years, professionally, but I've been in video games for 7 years,” Epstein admitted. “I come out of TV and film, so just the experience of building this game has been sort of a constant strangeness for me.”

And it’s that strangeness that makes We Happy Few such an outlier among the sea of sameness in the AAA space. We Happy Few has been in development for a number of years, but the hype has managed to stay relatively stable. And that’s probably a good thing. Cuphead may be the natural comparison for We Happy Few, especially as ID@Xbox’s previous indie darling, but Compulsion Games isn’t a third-party anymore. Microsoft purchasing the 40-person studio is a double-edged sword — We Happy Few has the opportunity to win big, but only if they deliver on what the community wants, as well as what their investors need.

With Gearbox, their Kickstarter community, and now Microsoft behind them, We Happy Few has managed to transcend what would have buried other games — embracing the chaotic nature of the creative process and allowing space to change.