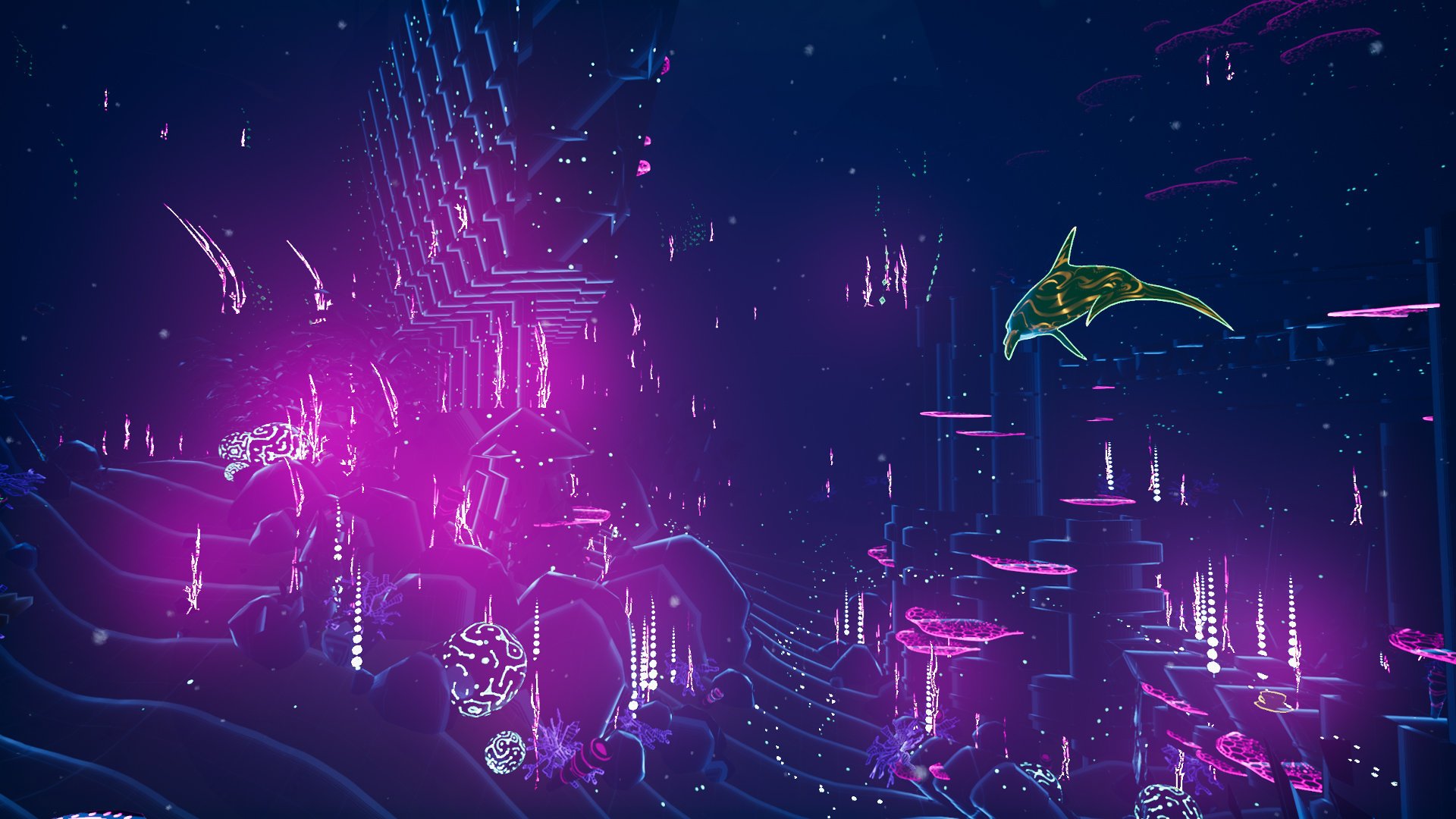 PlayStation VR is having a bit of a moment, with a number of fascinating games inbound after Sony's foray into a "PlayStation Direct" several weeks ago. Falcon Age (Outerloop Games) recently swooped onto PSVR and PlayStation 4; Trover Saves The Universe(Squanch Games) is set for a May 31 release date; and we have an Iron Man PSVR game on the way, too.

Tigertron Games, co-founded by James Mielke and Sam Kennedy, has a new PSVR game, Jupiter & Mars, that is dedicated to the company ethos of creating "games that inspire change." GameDaily had the opportunity to chat with Mielke about Jupiter & Mars, which received the recently retired Unreal Dev Grant.

Giving back through inspiring real change in the world is something that Mielke and Kennedy believe strongly in as the backbone of their creative process.

Jupiter & Mars is set in future-Earth's deep waters, where the sea levels have risen from melting ice caps and climate change. And, as a consequence of not heeding climate scientists, coastal cities are almost entirely flooded -- an expansive futuristic Atlantis. Humans have disappeared and the underwater cities have been reclaimed by ocean creatures, including whales and dolphins. Jupiter and Mars, the dolphins that players will need to control, are tasked to "neutralize a global network of machines that are disrupting sea life.

"I’ve always been eco-concerned," Mielke said. "When I went to college, it was either going to be for marine biology—I acquired [the interest] when I got certified as a scuba diver at 15 years-old—or it was going to be as an artist, since that’s what I was best at. So as I got older, and especially once I had kids, the issues of our environment became more pronounced. I wasn’t sure what to do. Whether to leave the gaming industry, or to try and do something unique within the game industry. The latter strategy made more sense, and that’s when Tigertron was born."

Mielke spent a number of years in game journalism before he broke into the game industry to become a producer at Q Entertainment in Meguro, Japan. He worked as a producer on games like Lumines: Electronic Symphony and Child of Eden before moving into Kyoto's Q-Games to produce the PixelJunk series. From there, he set his sights on Brooklyn, New York to work at Turbo Studios, Shinra Technologies, before he co-founded Kyoto's indie convention, BitSummit, which is now in its seventh year running. Kennedy, on the other hand, continued in media and consultancy until the two created Tigertron Games in 2017.

Mielke knew that his long-vested interest in marine biology needed to play a part in Tigertron's first title. But there would need to be a balance struck between education and enjoyment for Jupiter & Mars, all without coming across as "preachy."

"We wanted to avoid coming off as 'edutainment' by any means possible, because we’re probably not something you’d want to use in a classroom as a scientific reference," Mielke clarified. "Also because it infers something other than a ‘proper’ game. We also didn’t want to preach too hard, because gamers don’t like to be spoken to in that manner. So we decided early on that we would just present our characters in this kind of environment, based on the worst possible outcome for post-humanity, and let people come to their own conclusions. We did base as much as we could in the game on actual science, like the A.H.D.s (acoustic harassment devices) that are actual tools used in the real world by scientists to keep, say, feeding orcas away from areas they’re (the scientists) doing research in.

"Basically we tried to keep it real, while taking the occasional liberty of adding in fantasy elements, such as when Mars inherits the shell of a goliath conch to use as a battering ram for harder barriers in-game. There’s a bit of soft character evolution in Jupiter and Mars that isn’t what I’d call 'realistic,' but hopefully it’s still fun."

There is much more to Jupiter & Mars than its striking aesthetic and roots in advocacy. The development team created "five different biomes that all feel different," as players experience the underwater future-Earth through the eyes of a dolphin.

"While it’s not as obvious to humans as cloudy weather or sunny blue skies might be, the environments are definitely varied," Mielke noted. "Underwater atmospherics were adjusted through different lenses, like visibility and range (which scuba divers would recognize) varying in clarity, or night versus daytime illumination (requiring heavier use of echolocation to keep your way visible), and color tone. In a biome like ‘Plastic Beach,’ the color tone is very brownish. This is a metaphor for the Asian islands this biome is based on having more trash as a result of the way the oceans swirl and populate those areas full of trash. Google the ‘Great Pacific Garbage Patch’ and prepare to be depressed. But we didn’t want to make it disgusting to play through, so we raised visibility, and put as many details as we could in the environments to give it the feel of a sunken Kowloon or Thailand.

"Most importantly, though, is we knew a lot of the world would be dark. It’s just how it is when you try and refract light through water, and factor in deeper tiers. Owing to my past work at Q Entertainment [Child of Eden], I am drawn to this kind of neon-edged look, because it’s fun to see, and not photo-realistic in the least. So, with the power of echolocation being the most frequent ability used, I wanted to make sure people would be delighted when they used it to light the way in the deeper parts of the game."

Jupiter & Mars isn't built in fantasy, even though its neon-tinged aesthetic makes it a retro-future expression of what may come to pass if climate change is left unchecked.

"It’s just the logical conclusion to what we’ll be faced with if we don’t pump the brakes on what our excesses are now," Mielke explained. "As someone who lives in New York City, and understands how treacherous a rising sea level would be, this served as a jump-off point for the game’s fiction. We just thought, 'Well, what would coastal cities, or islands look like if we raised the sea level a bit?'

"As far as the game's science was concerned, we had to take some liberties somewhere. It isn’t realistic that the One World Observatory would be submerged underwater—even if all the ice caps melted, it wouldn’t raise sea level thousands of feet—which is why you still see buildings poking out of the ocean in the Atlantis (New York City) biome. But we did submerge the Statue of Liberty, for the same dramatic effect achieved at the end of Planet Of The Apes."

Jupiter & Mars is the kind of experience that follows you after it's over and that's by design. It isn't necessarily for the "core" gamer, since it's lightweight and more experiential than a traditional game, even in VR.

"If you’re more prepared to just dive into this game world, and just enjoy being in the space, I think you’ll get a lot more out of it," Mielke said. So when I see kids grab the controller for the first time, or put the headset on, and say 'Wow,' it means a lot. Because if we can inspire wonder, the messaging becomes a lot easier to communicate."

Tigertron's messaging, creating games that inspire change and growth, is evident in Jupiter & Mars. And in a world shaped by the decisions that humans make, where we have people denying that climate change is a serious issue that future generations will continue to face, Mielke and Kennedy have created Jupiter & Mars' environment built on those consequences. While that world may be striking, it's a stark reminder that the earth will still move ever-onward, even after humanity has lost its dominant foothold.

Note: Tigertron's Sam Kennedy will be appearing on a VR design panel organized by Alex Schwartz and Cy Wise at our Casual Connect London show.