Free Games Give Developers and New Storefronts a Boost 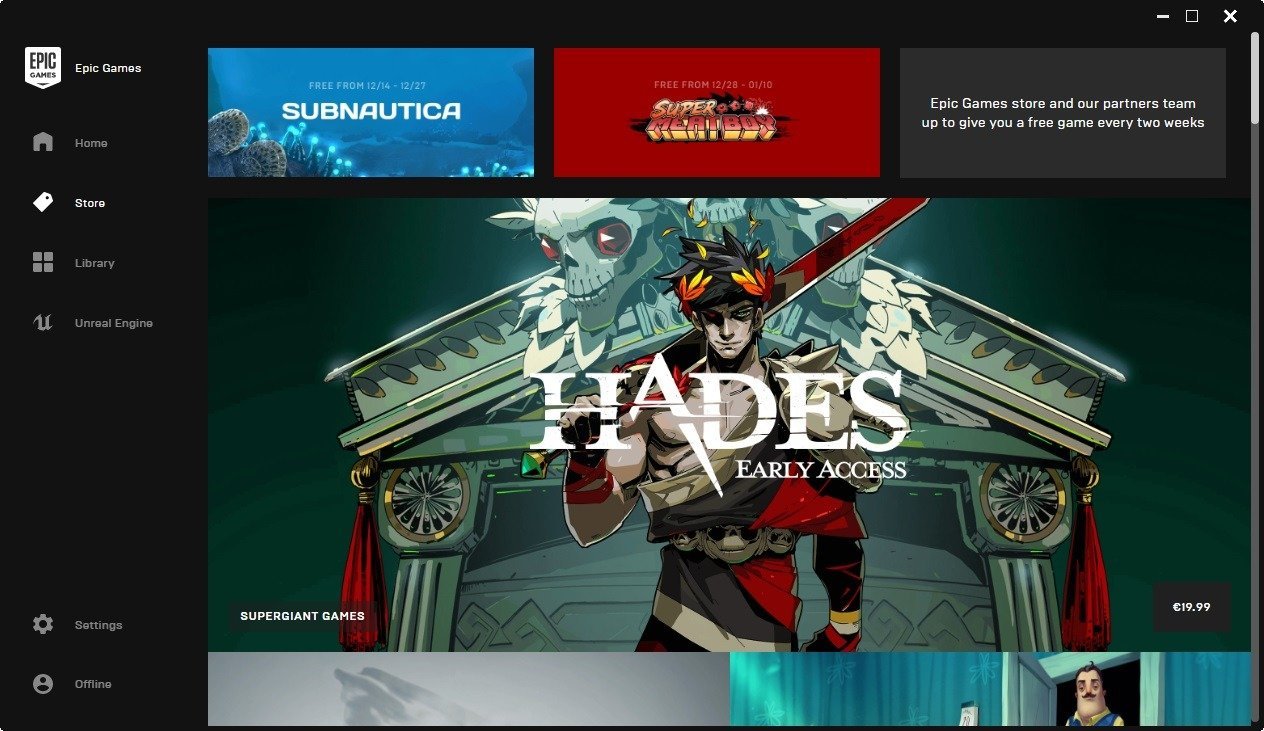 Free is good. That’s the message that platform holders have been sending, as they seek to lure players to their service. But it’s not just about the competition between digital storefronts. Research from firms like Newzoo and Nielsen-owned SuperData has shown that game giveaways on the new Epic Games Store or Sony’s PlayStation Plus have directly led to a sizable increase in active users, giving certain titles a new lease on life. By forfeiting some sales in the short-term, developers are realizing greater benefit for the long-term.

Newzoo’s PC Game Tracker, for example, found that the Epic Games Store strategy of offering a free game every couple of weeks has been quite effective in boosting said game’s user base even after the free period ends. Subnautica (free between December 14-27) and Slime Rancher (free between March 7-21) both enjoyed player spikes that were fairly dramatic if you compare the before and after free period on Epic Game Store. Subnautica’s player share in the core PC market jumped 625 percent month-on-month, while Slime Rancher’s went up 1050 percent.

While the player base inevitably begins shrinking again right after the free period, the good news is that many games continue to enjoy a higher level of active users even months after the giveaway. Part of the strategy, according to Newzoo Market Consultant Guilherme Fernandes, is simply building up trust with an audience.

“By making their game freely available on the Epic Games Store, developers/publishers are investing in creating a bond with gamers, raising awareness for their own work in the process,” he told GameDaily. “It largely increases the chances that their next game (or other already released titles) getting picked up by more gamers. Therefore, it would not be surprising to see developers/publishers lining up to make one of their games free for a couple of weeks on the EGS, especially considering the userbase that is active on the platform daily.

“Moreover, it should not be forgotten that Epic Games is ‘funding these free releases,’ as explained in the company's press release about the store launch. Both factors explain why we have seen developers/publishers such as Annapurna Interactive (What Remains of Edith Finch), Unknown World Entertainment (Subnautica), and Terrible Toybox (Thimbleweed Park) ensure that EGS has always had a free game on offer since launch.”

The free games approach may be especially helpful for newer developers, Fernandes explained: “There are several examples of both small and large studios whose second or third releases sell better than the first title from the studio or in the franchise. A recent example from this week is Hopoo Games, which reported that the sequel to Risk of Rain reached one million units sold five times faster than the original.”

SuperData’s own tracker shows a similar jump in Subnautica’s numbers following the free game period on Epic Games Store. Aside from the attraction of something being free for players, the marketing advantage for developers in getting the spotlight as the EGS free title cannot be overstated.

“The practice of offering consumers a loss-leader in the form of a heavily discounted or even free title is nothing new, of course,” SuperData co-founder Joost van Dreunen commented to GameDaily. “We’ve seen the same on the console where, for instance, the new all-digital Xbox comes with three free titles. As long as [Epic CEO Tim] Sweeney continues to bring his wallet to these conversations, both small studios and consumers will reap the benefits on the short term.

“However, you’d have to ask what this does for developers long-term. The answer is that especially small and medium-sized studios benefit disproportionately from platform support--as a new distributor or platform holder looks to expand their market presence, they push titles to build up a unique brand presence (‘these are the type of titles you can expect here’). For smaller studios, this means their title is backed by a much larger marketing effort than they themselves could muster and helps establish their brand and intellectual property as well.”

While the EGS is still in its infancy and cannot match Steam’s reach, van Dreunen expects that to change in due time, especially with the kind of investment Epic has been making.

“The expectation is, of course, that Epic will continue to tap into its war chest of Fortnite money to subsidize all this and compete on equal footing with Steam and others. But that’s a long road,” he said.

Epic definitely appears to be borrowing tactics from Sony and Microsoft, which have been offering free games with PlayStation Plus and Xbox Live’s Games with Gold program for some time now. While each game’s performance must be measured on an individual basis, the net is usually a positive. SuperData pointed to the numbers of Ubisoft’s For Honor as an example on PlayStation Plus.

“For Honor joined the free-to-play games list with PS+ subscription back in February, which resulted in a six-fold increase in monthly active users for the game,” noted van Dreunen.

He did caution that the carousel-style of rotating freebies can pose a challenge to keep active players for the long haul, however: “The challenge here is to keep players engaged after the initial month. There are many substitutes and each month sees a new selection. This has a detrimental effect on longer term commitment among players, both in terms of time and money spent.”

Keeping an active player base is the key to success in this new era of games-as-a-service. Whether you’re indie or triple-A, player expectations have never been higher, and the thirst for continued updates and content seems unquenchable. The pressure to continually support games may be daunting, but developers seeking that additional runway may want to consider applying for one of the free games programs out there. Epic is certainly going to be looking for more titles to bring to EGS.

Epic’s 88/12 revenue split and somewhat controversial approach to exclusivity has already gotten the development community to stand up and take notice.

“The EGS has established a strong foothold in the industry and is the fiercest competition that Valve has faced in over a decade,” Newzoo’s Fernandes remarked. “Epic Games promises to continue developing and improving the store's features. In the long-run, both Steam and EGS will probably continue to exist as they cater to slightly different audiences, the latter focusing on a more curated store and also having a larger share of less experienced gamers in its userbase, which originated from Epic's Fortnite.

“It would be wrong to see it as the PC version of having both a PlayStation and an Xbox. Users don't have to spend hundreds of dollars on hardware, instead just having to have two free-to-download clients. They may decide to use one or the other in specific situations, depending on their strengths and weaknesses.”

At the end of the day, having more options is good for both developers and players. No one wants to see a monopoly, and with new entrants like Discord, Kongregate’s Kartridge and others, there have never been more storefronts to choose from.

As Emily Greer, who just stepped down from Kongregate, commented to GamesIndustry.biz, “People were just developing for Steam and just had Steam in mind. As there's a rise of other stores -- and besides the new ones coming in, there's places like Itch.io -- less people have the default expectation that only Steam matters. They're more open to distributing in different places, finding different audiences, not making APIs and technical decisions that make it difficult to be off Steam. It can be a healthier ecosystem if there are quite a few stores.”

And you can bet, that just like EGS, these new stores will leverage the free games idea. Greer remarked, “It's easier to bring people in with free games and then have them fall in love with the platform.”