Microsoft and Sony to collaborate on cloud gaming and artificial intelligence 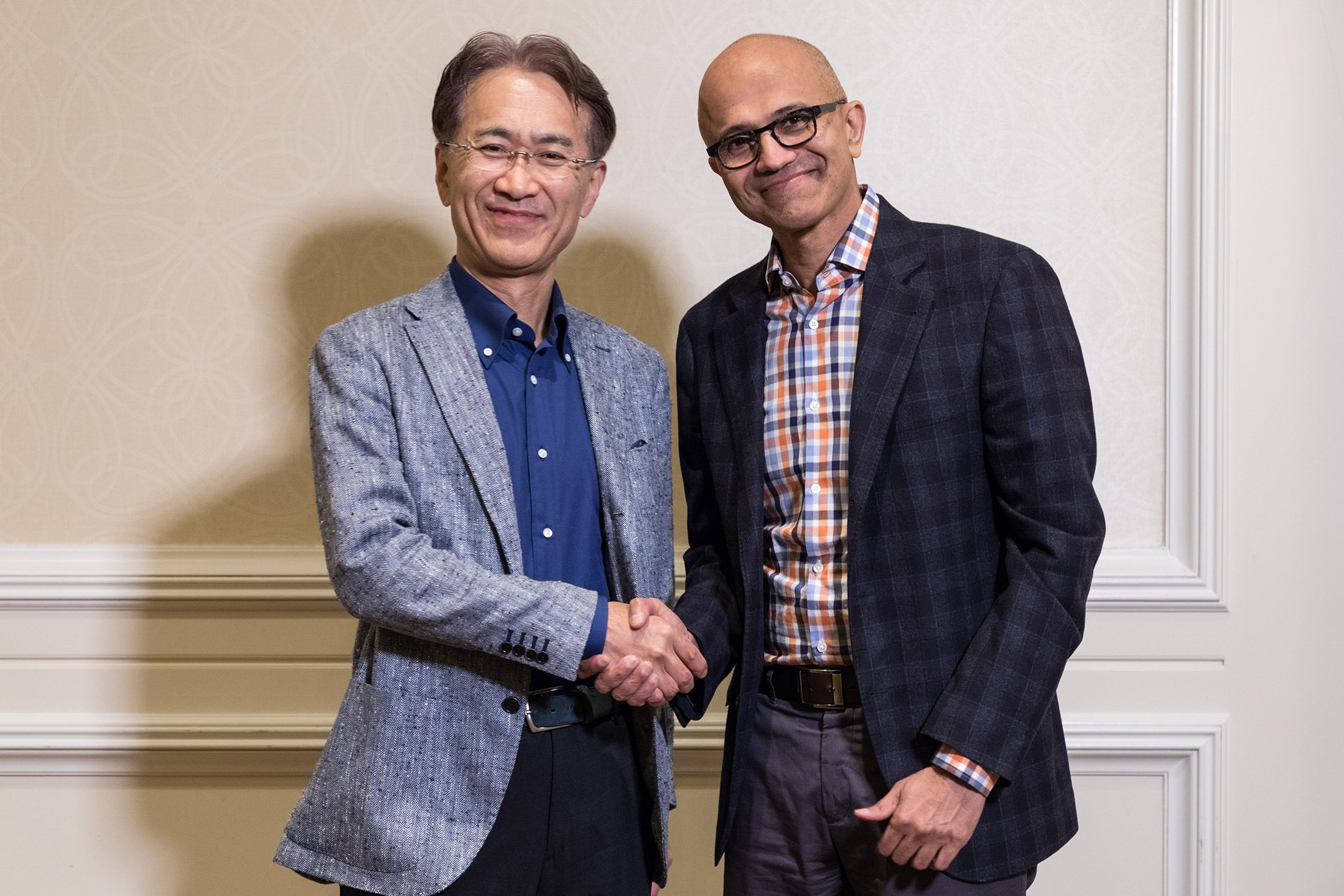 There have been walled gardens in gaming for as long as there have been consoles and computers. The console wars are storied, built up around careful marketing campaigns that used to pit superfans against superfans. But the walls are coming down. The CEOs of Microsoft and Sony are no longer staring one another down across a minefield of attack ads and aggressive communities -- Kenichiro Yoshida and Satya Nadella have decided they'd rather partner up and move the industry along, rather than get caught up in rivalries.

According to a news story on the Microsoft website, Yoshida and Nadella have signed a "memorandum of understanding" that will allow both companies to team up to explore and "enhance customer experiences" on Xbox and PlayStation. The companies will be focused on defining what Microsoft Azure could bring to the table for game and content-streaming services, in addition to collaborating on semiconductors and artificial intelligence.

"By working together, the companies aim to deliver more enhanced entertainment experiences for their worldwide customers," the post reads. "These efforts will also include building better development platforms for the content creator community."

This partnership isn't about joining forces to create a brand new kind of console -- Microsoft has Xbox, Sony has PlayStation, and that's not going to change any time soon. Instead, this is about pooling resources to solve problems that are plaguing both companies. Microsoft has poured considerable resources into Azure, which continues to be one of their best (and biggest) revenue streams. Sony has had considerable advances in semiconductors and hardware, which explains why the PlayStation 4 has been the best-selling console of the generation. (Though they are losing ground to the Nintendo Switch.)

“Sony has always been a leader in both entertainment and technology, and the collaboration we announced today builds on this history of innovation,” Nadella said in the post. “Our partnership brings the power of Azure and Azure AI to Sony to deliver new gaming and entertainment experiences for customers.”

Microsoft and Sony are looking to create new "intelligent image sensor solutions" by connecting Microsoft's Azure AI tech with Sony's image sensors, which convert optical images into an electronic signal. This has a number of implications for the future of AR/VR, as well. The artificial intelligence partnership may end up merging what Microsoft is doing well with their communities on Xbox (which is managed between artificial intelligence, human intelligence, and machine learning) with what Sony needs in order to grow their community spaces.

Dave McCarthy, VP and head of Xbox Engineering, told GameDaily in an unrelated interview that AI and ML solutions that make communities better shouldn't be limited to one company. It doesn't provide a competitive advantage to say that Company A has built communities that are safer and more inclusive than Company B. If Company A has the technology and the ability to change the industry for the better, it should be shared for the greater good.

“Sony is a creative entertainment company with a solid foundation of technology. We collaborate closely with a multitude of content creators that capture the imagination of people around the world, and through our cutting-edge technology, we provide the tools to bring their dreams and vision to reality,” Yoshida said. “PlayStation itself came about through the integration of creativity and technology. Our mission is to seamlessly evolve this platform as one that continues to deliver the best and most immersive entertainment experiences, together with a cloud environment that ensures the best possible experience, anytime, anywhere. For many years, Microsoft has been a key business partner for us, though of course the two companies have also been competing in some areas. I believe that our joint development of future cloud solutions will contribute greatly to the advancement of interactive content. Additionally, I hope that in the areas of semiconductors and AI, leveraging each company’s cutting-edge technology in a mutually complementary way will lead to the creation of new value for society.”

Microsoft's dedication to Gaming For Everyone is clearly allowing the company to embrace these partnerships that might have been a no-go for less bold, less confident CEOs. And in addition to this partnership, Sony reaching out and saying yes to EA is likely a sign of how Yoshida will be steering the PlayStation brand into the next generation. This unprecedented partnership has the ability to shape and change the way platform holders, publishers, and developers collaborate on shared problems for the common good of the industry.