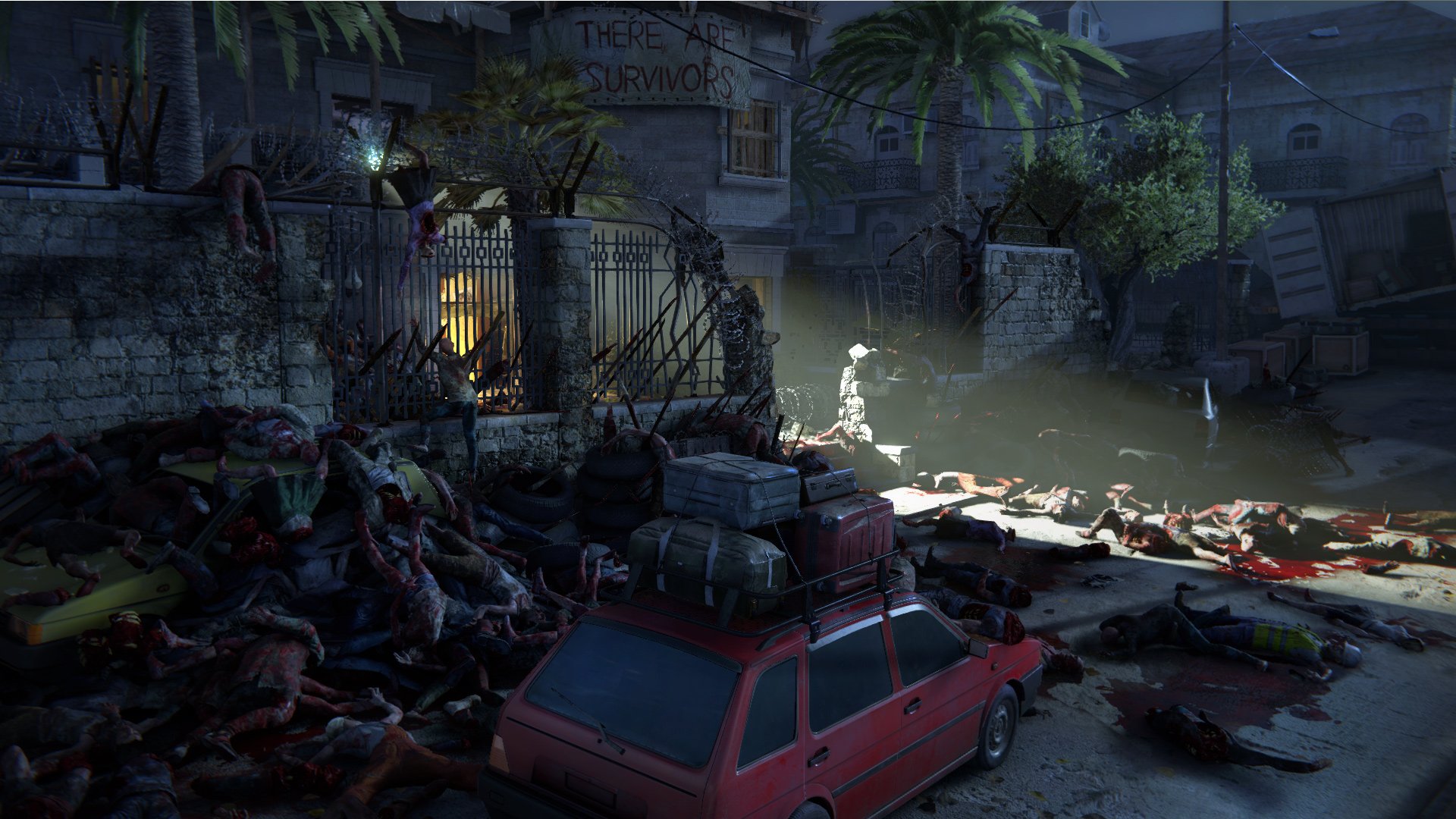 World War Z has surpassed 700,000 copies sold on the Epic Games Store. EGS sales account for approximately 30% of World War Z's sales, with the remainder comprised of both physical and digital console sales. According to CEO Matt Karch, EGS sales have "beat the numbers on the PlayStation Store and Microsoft Store." Karch told GameDaily that he's been impressed by the sales on EGS, especially because it's such a new platform.

"Epic [Games Store] is adding a regular new stream of users that immediately become an audience for our game," Karch noted. "For this reason, we've seen a very slow decay curve on the store."

Karch wouldn't disclose what the decay curve has looked like for World War Z, but considering the alacrity that we see games being sold for 40% off or more mere weeks after launch... anything slower than that would probably feel like a miracle.

As for the social backlash that Saber Interactive has been dealing with, Karch believes that things have tapered off on that front. He's not spending as much time defending Saber's choice to bring WWZ exclusively to EGS.

"Things have quieted down a bit," he began. "I think people are starting to accept that Epic is extremely serious about providing fair competition in the PC space. I still hear some complaints about 'exclusives' being bad for competition, but in all honesty, all you need to do is download a launcher, not buy hardware, so the 'exclusivity' doesn’t really exclude anyone."

"There is a range of interesting opinions from developers, but I think some that decry exclusives are just telling the community what they want to hear," Karch continued. "I don’t believe many of them have serious moral reservations about putting their games on only one store. The only way Epic succeeds in building up a consumer base is through exclusives. Since they are only charging 12% to the developer, it benefits not only developers but also the community, as those cost savings can be passed down to players or paired with extra content that previously may not have been feasible. We priced World War Z on PC at about $5 lower than initially planned and continue to add new content month after month, for example. Given the game's success, we're incredibly happy we partnered with Epic for this project."

World War Z came out of nowhere. Days Gone, Sony Bend's first-party zombie apocalypse game, was supposed to eclipse any other game in an already oversaturated subgenre. But while we collectively held our breath for what turned out to be a rather tepid title, World War Z cleaned house over at the Epic Games Store. World War Z isn't without its flaws, of course. But Saber Interactive's spin on World War Z's universe is a refreshing departure from more laborious open-world narratives.

GameDaily caught up with Matthew Karch, Saber Interactive's CEO, to talk about how his company has stayed nimble after 18 years in the business, the partnership with Epic Games, and Saber's approach to licensed games.

Saber Interactive is comprised of a number of different studios these days, but it didn't start that way. Karch and his business partner, Andre Iones, established headquarters in Millburn, New Jersey (now located in Maplewood, New Jersey) before expanding out to St. Petersburg.

"We were a one-studio shop for a very, very long time," Karch said. "[But] I wasn't moving to Russia."

In the beginning and for the vast majority of projects over the years, Saber was contracted as a work-for-hire studio to pull together games for AAA studios and publishers alike. Karch wasn't keen on being beholden to other companies and their shifting schedules, creating the potential for his studio to fall to pieces.

"When we started out, the games that we developed were games that we would come to a publisher and pitch it, they would fund it, and they would take all the money, which is the standard developer/publisher model that, fortunately, the advent of the digital revolution has significantly altered that landscape," Karch explained. "But at some point, we realized that we were highly, highly reliant on publishers and at their whim, and any minute we could be out of business because, if they don't pay us, we're in trouble. And that happened a few times. So we decided to expand and to work on multiple projects at one time."

From there, Karch and Iones made the decision to re-invest in Saber Interactive, both with revenue and internal resources. But part of Karch's approach to business, especially licensing, is in who he knows. When Karch was debating what it would take to get an NBA license, or even how to approach World War Z, it came down to serendipity.

"I was a member of a band, and we had this guy who lives in town who was an executive at the NBA, and I said, 'It would be awesome to get an NBA license.' I was playing at a backyard party for his wife's 45th birthday party, and that's how I met him. He says, 'Come into the office, I'll give you a license.' He gave me a license. I realized that our team in Russia was not the team to do that particular game, and so we found a team in Spain that ultimately became part of Saber, and we've worked with them on NBA Playgrounds."

For World War Z's licensing, it was another instance of knowing how to engage with the right people at the right time. It's partly luck, of course, but in order to encourage the luck, Karch is always starting conversations based on hypotheticals. When Marvin Neil, who at the time handled licensing at Paramount, approached Karch a number of years ago at GDC, the conversation was born out of a mutual love of games like Left 4 Dead. Karch had read World War Z, watched the movie, and was in the minority that loved both mediums -- he saw an opportunity to build the kind of game that he wanted to play.

"I really wanted to do a brainless fun co-op shooter, because I love Left 4 Dead, I really wanted to do something like that," Karch admitted. "I don't even think it was me coming up with the idea. I think I met [Neil] at GDC and he said 'Look, we've got this World War Z license.' I love the book. I saw that the movie was particularly problematic, didn't look like it was going very well, so I knew that none of the publishers were going to touch it, so I figured I'd be able to get a license at a reasonable price."

Karch didn't disclose what that reasonable price ended up coming in at, but he was right: no one else had the interest in touching a property that didn't resonate with the intended audience. It's been six years since the movie came out and has fallen out of the pop culture collective consciousness, for the most part. Licensing is a tricky business and it requires a light touch from the licensee to the licensor. And, for the most part, gamers don't want a game that's heavily drawn upon a licensed property… unless it's done well. For Karch, owning the IP that his studios are working on isn't necessary. In his mind, leasing an IP for 99 years isn't functionally different than owning it outright.

And so, Saber Interactive, and the almost 500 people between each of its studios, went off to create the zombie game that they'd been craving to play. But the development process wasn't without its hiccups.

Karch said: "So, I told my team, 'this is what we're doing' and then they show me the first prototype. The first prototype that they showed me was basically Left 4 Dead. And I'm like: no. Not that there's anything wrong with Left 4 Dead, it sold like 28 million copies, but I'm like we can't do just that. If [we do], we're going to be called copycats. And they're like, 'We don't know how to do [this].' Well, we're not going to release the game until you figure it out. In hindsight, we would've taken even more liberties if we had known the sequel wasn't coming out, we would've done even more special zombies. We're still going to expand on it and do that kind of stuff."

Part of what made the World War Z license attractive to Karch and his team was having the established universe ready to build upon and play around with, in addition to not having to worry about "building hype" around an original IP. There's more inherent risk involved when stable, mid-sized studios take the opportunity to build something new. What if it fails? What if the studio, which has been around for 18 years, falls apart because of one bad decision?

Building from a license took some of that anxiety and put it aside.

"I can't build up the hype machine at prerelease," Karch noted. "I don't have money to do that. So for me, if I can leverage a license that everybody's heard of, I automatically have that recognition."

It seems like the bet on the World War Z license is paying off. The latest numbers rolling in from Saber Interactive puts World War Z's sales at around 2 million copies worldwide. At the beginning of May, a decent chunk of those sales (somewhere in the range of 32,000) were physical purchases, which is something that independent studios tend to struggle with, especially in the climate of the digital age.

While there's been a lot of vitriol about Epic Games Store exclusivity, especially among gamers who favor Steam or rather myopically liken EGS to creating console exclusivity on PC. However, that exclusivity has been a deciding factor in World War Z's success. Karch was candid about why Saber made the choice to go with an EGS exclusive title.

"Obviously the argument that I've heard in a lot of comments online are well, you're better off releasing everywhere," he said. "And while that's true, the more places you release the game the better chance you have for making money, right? The more platforms, the better. I absolutely agree with that, except for Epic came in with: 'We really want to support your title, we believe in what you're doing, and we're going to make sure it's front and center and every time someone loads up Fortnite, the 200 million people that play it, they're going to see World War Z there," and I think that's worth more than trying to fight with an algorithm on Steam to be at the top of their charts."