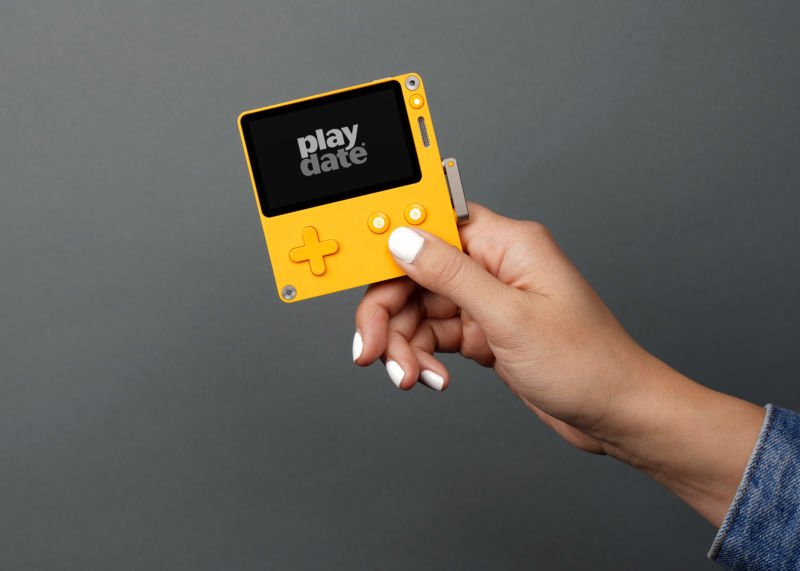 Panic Inc, the Mac-based app developer and publisher of Firewatch and Untitled Goose Game, has unveiled a brand new and unique, if albeit niche, handheld gaming device called Playdate.

On the surface, it looks a typical handheld: packing a 2.7 inch high-res black and white screen, along with USB-C support, Bluetooth, wi-fi, a headphone jack, rechargeable battery, a D-Pad, and A/B buttons in a very nice yellow color. But what makes it stand out is the inclusion of a rotating crank.

The crank is a unique control input that folds into the device, and developers who are working on Playdate games have the option to include it in their projects should they wish to. According to Panic, design partner Teenage Engineering wanted to “break people of their touch psychosis,” referring to how accustomed everyone is to touch screen devices these days.

Playdate was first conceptualized as a device back in 2014, back when Panic had just signed Campo Santo’s Firewatch to a publishing deal, according to details in a cover story written by Jen Simpkins in the latest issue of Edge magazine. In fact, a virtual model of the handheld was hidden in the game. But it was in 2015 that prototyping officially began.

On the games front, Panic is adapting an atypical distribution model for the device, with a seasonal setup and one game release per week. According to designer Neven Mrgan, it was inspired from when the big streaming services were starting to pick up.

“It was the era of new streaming services: Netflix and Amazon was starting to do it,” Mrgan said to Edge. “The services were releasing all episodes in a series at once. It sucked the fun out of it. You got this bucketful of content, and then it’s gone the next day, and the conversation is over. So that led, I think, to the season idea: what if there was something new every week?”

A majority of the games are being kept a secret for now, but some of the developers confirmed to be making games include Bennett Foddy (Get on Top, Getting Over It), Zach Gage (SpellTower, Ridiculous Fishing), Shaun Inman (The Last Rocket), and, in a massive get, Keita Takahashi.

In fact, Takahashi, creator of Katamari Damacy, Noby Noby Boy, and the upcoming Wattam (with Funomena), is the only developer whose game has been overtly discussed by Panic. In Takahashi’s game, called Crankin’s Time Travel Adventure, you control a robot via the small crank in order to overcome a number of obstacles in order to reach his date, Crankette. You can use the rotating crank to move Crank forward as well as rewind time, not too dissimilar to the rewind mechanic in Jonathan Blow’s Braid.

Panic opted to remain quiet on Playdate for so long, because of the pervasiveness of information and the too-long hype cycles that consume the discourse. In the Edge interview, co-founder Cabel Sasser compared this to how consumers purchased games in the 80s and 90s. "There certainly wasn’t YouTube,” he said. “And there was no way to know what a game was going to be except to pick it up off the shelf, flip it over and look at two screenshots,”

Playdate will be available for pre-order by the end of 2019, with expectations of shipment in early 2020. It’s priced at $149/£115 for a package including the device, a USB-C cable, and the aforementioned first season of games. A second season is dependent on the handheld’s sales performance.

Speaking with GameDaily via email, DFC Intelligence analyst David Cole noted there are challenges in creating short-run hardware like the Playdate, particularly around distribution and manufacturing, especially as it’s something that Panic hasn’t dealt with before on this scale.

“This is probably something that needs to be seen in person, and how is that going to happen?” said Cole.

Despite being advertised as a niche product, however, Cole added he felt the “price is high” for something that “seems very ‘different’.” Panic isn’t looking to compete with Nintendo’s Switch or app-store enabled mobile devices. It’s a device with limited scope, intended for a specific audience.

“It’s designed to deliver a jolt of fun in-between the times you spend with your phone and your home console,” the company said in its announcement post. “[It’s] something to fill the moments when you just want a game you can pick-up and play.”

Previous attempts at micro consoles, such as the Ouya (which will meet its final end as new owner Razer will cease support next month), have been complete failures. Panic will need to learn from the past to avoid a similar fate.

“It will be a tough road,” Cole suggested. “They need to identify an audience for the product and find a cost effective way to reach them. I am not sure Internet marketing will do that. This seems like a hands-on device I am going to want to try at a store or friend’s house. If Nintendo releases a product like this, they would demo it all over the place. That is a key to success.”

The reaction to Playdate’s announcement seems to be positive, though some reactions have pitted it head-to-head against mainstream devices. Panic will need to lean into its niche and target the specific audience who is hungry for quirky, unique indie efforts.

Panic clearly understands it needs the lift of recognizable names like Keita Takahashi and Bennett Foddy to make the Playdate a success. What’s not clear yet is whether the curiosity of the Playdate will be enough to build momentum and drive sales of the iconoclastic little handheld.