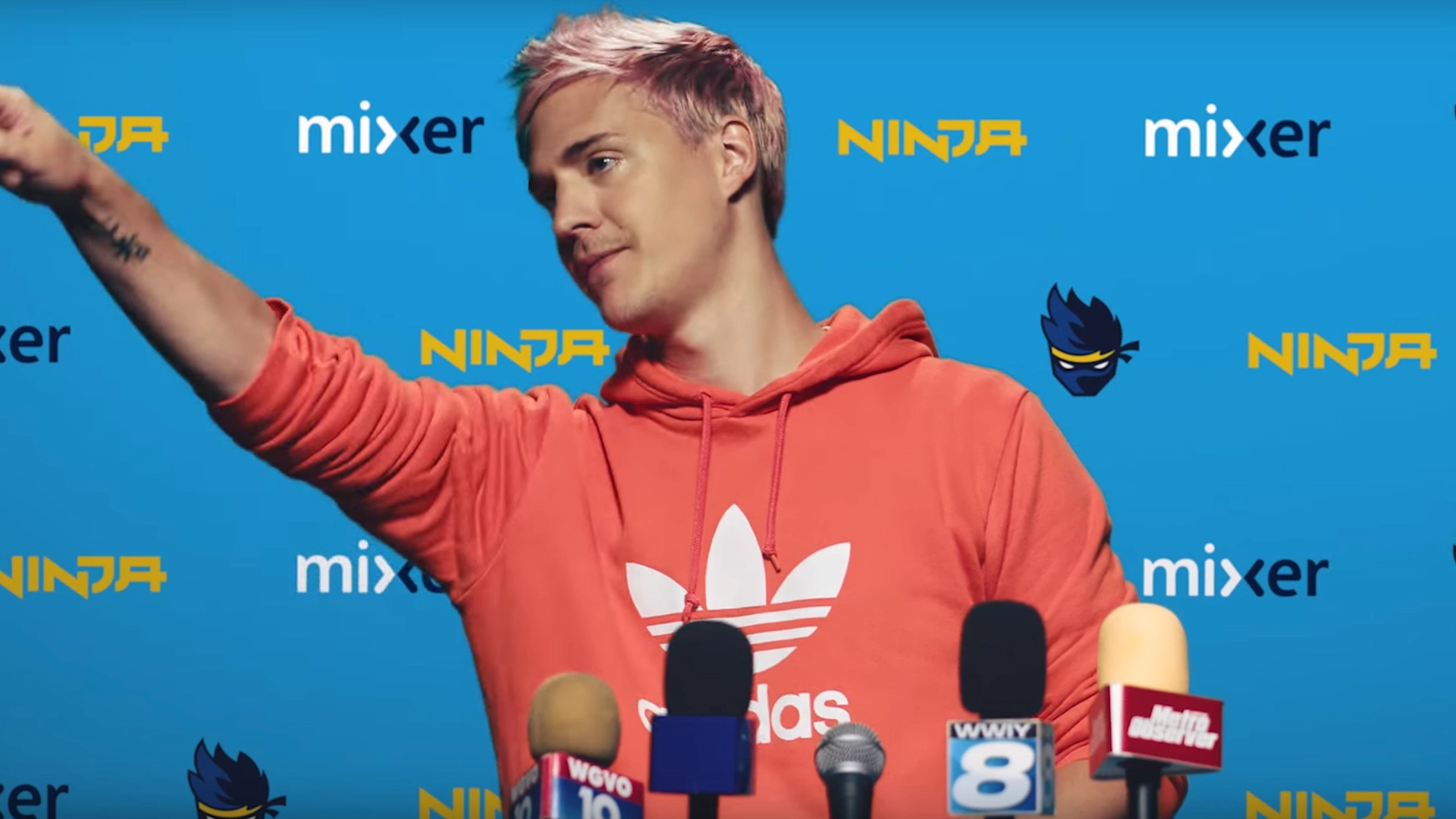 Ninja is leaving Twitch to take his talents to Mixer, the popular streamer announced via a video posted on social media.

The streamer, real name Tyler Blevins, announced in the video via a faux press conference that he will exclusively stream on the Microsoft-created service, but maintained it was “the same me, just a different platform.” In a press release put out by his management company alongside the announcement, he added that “working with Microsoft and coming over to Mixer felt like a natural next step,” noting he started out his career with Halo.

“Whether it’s participating in events where I can connect with other people who love games or creating the best interactive streaming platform, Mixer inspires me to push the boundaries of gaming and opens up opportunities for me to interact with my community in more ways than ever before,” said Ninja. “I’m excited to continue doing what I’ve been doing – playing games and sharing my experiences with the world – and so much more”

Ninja joining Mixer is a massive boon for Microsoft's growing streaming platform. According to a recent report by StreamLabs and analyst firm Newzoo, Mixer lagged far behind both Twitch and YouTube for the three months between April and June of this year, with 119.1 million hours watched and 12 million hours streamed in that period on the service. With Ninja now exclusive, those numbers, as well as potential signups, could rise for the next quarter’s report, with his rabid fanbase willing to go where he goes.

“Although acquiring talent is important, the other challenge will be if the community follows. And this is not just viewers, but streamers too,” StreamElements CEO Doron Nir told GameDaily.biz via email. StreamElements is a production platform for streamers on Twitch, Facebook, and YouTube, providing monetization and production tools to both grow audiences and make streams look professional.

Nir added that individual talent as popular as Ninja helps services like Twitch or Mixer, similar to how original programming on streaming platforms like Netflix or HBO can make or break their viewership. “Twitch's success has been about a lot more than Ninja. They have a number of streamers who have been generating more hours watched per month than Ninja with no shortage of superstars,” Nir continued.

The Ninja signing could have much bigger implications than simply bolstering Mixer, however. As noted by Patricia Hernandez in an op-ed for Polygon, Ninja could become a selling point for not only Mixer, but also for Project Scarlett, the next-generation Xbox console due to release next holiday, and its key launch game Halo Infinite, which brings things full circle for him with his start as a Halo pro.

But his move to Mixer also comes a little over a month after Microsoft axed a number of internal creators across both Mixer and Inside Xbox as part of a post-E3 round of layoffs. The gaudy numbers for Ninja’s move may bring the layoffs back under scrutiny: a Daily Esports report, citing a single Twitch source, referenced a bidding war between Twitch, YouTube Gaming, and Mixer that mentioned a figure somewhere between $50-$100 million. Microsoft has not confirmed the financial agreement it reached with Ninja.

“We’re thrilled to welcome Ninja and his community to Mixer. Mixer is a place that was formed around being positive and welcoming from day one, and we look forward to the energy Ninja and his community will bring,” a Microsoft spokesperson told GameDaily when asked about the platform’s strategy going forward in light of the recent layoffs and Ninja’s onboarding. “We’re continuing to focus on building the most engaging and interactive streaming platform.”

With Ninja no longer a primary face for Twitch, this now leaves an opportunity open for other top streamers to see who can fill the gap that Ninja has left on the platform. Nir told us that if one of the streamers wants to claim the top spot on Twitch a big name celebrity appearance could be just the trick, similar to how Drake joined Ninja for a Fortnite stream last year.

“In terms of popularity based on hours watched, Ninja hasn't been the top streamer for awhile. This year it has been influencers like Shroud, Tfue, and summit1g. All it takes now is for Drake to join one of them on stream to educate the broader pop culture press on the star power these streamers are already generating,” Nir remarked.

As we’re writing this, Ninja is continuing his first Mixer-exclusive stream, playing Fortnite live from Lollapalooza, and he currently has a viewership peak around 95,000 viewers. That's not a Ninja viewing record by any stretch, but it has broken his average viewership figures within his final few weeks of streaming on Twitch, according to Polygon.

Things are off to a great start for Ninja on Mixer. The bigger questions are if he can keep the momentum going to provide long-term growth and tempt other bigger names to hop over from Twitch or YouTube Gaming.

If so, it’ll become an incredibly savvy move on the part of Mixer. For its part, Microsoft declined to comment when we asked if other big names were coming to Mixer in the near future. A spokesperson simply said Microsoft is “always exploring new and exciting opportunities for our community."