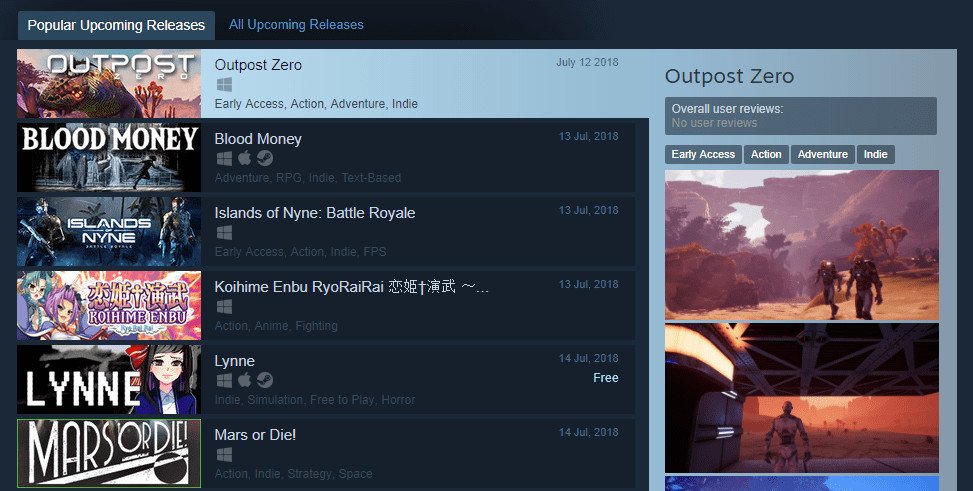 Discoverability is a nightmare for most game developers. With thousands of titles released onto Steam each year, Valve’s storefront can present a huge challenge to any indie trying to gain even the slightest visibility. This has caused some developers without scruples to game the system. As No More Robots founder Mike Rose pointed out in March, some developers were manipulating Steam’s Popular Upcoming List to their advantage by deliberately lying about their game’s release date over and over to ensure that they keep appearing in that list.

At the same time, some developers do genuinely forget to set the correct release date and might appear on that list when they shouldn’t. Ultimately, it “leads to titles which are *actually coming soon* to be bumped from the list on the front page,” Rose said in March. “This is a genuine issue, because as we all know having your title on the front page of Steam, even in an Upcoming list, can be a big deal for wishlists/sales. So if this list does not actually show upcoming games, it: 1. Makes consumers stop looking at it; 2. Hurts upcoming games.”

It may have taken Valve five months to do something about this, but the good news is that the company today did finally make a change to the Popular Upcoming List to make it much harder to manipulate release dates. As spotted by PCGamesN, a Reddit user claiming to represent an indie games label posed a screenshot showing that developers now must seek approval from Valve in order to change a release date. Valve has since confirmed that it has updated Steam so that developers can’t change release dates at will.

Developers who wish to make a change to their game’s release date on Steam are now greeted with the message, “If you need to make changes to this date, please contact Valve here with the reason for your new release date and what date you’d like to set it as… you should be pretty certain that your new date is the date you will release.”

A Valve spokesperson commented to PCGamesN that the update “was made in order to help guide developers that either intentionally or unintentionally changed their release dates multiple times, causing their game to show up on certain lists in a way that was confusing to players and frustrating for other developers.”

Valve’s spokesperson continued, “...we’re also now sending reminder emails to all developers two weeks ahead of their specified release date to help make sure they are on course for the release date they had indicated. We previously were sending these reminders for a small set of games as a test, but as of today we are doing it for all games that are on track to release in the next two weeks.”

Previously, there was no limit whatsoever on the number of times a developer could edit their own game’s release date on the Popular Upcoming List. Now, however, frequent requests will likely raise a red flag, and the approval will ultimately be at Valve’s discretion. Back in March, when Rose first noted the problem, Valve’s Tom Giardino, a member of the Steam business team, replied on Twitter that Valve “care[s] about this and are trying to fix it in a way that makes Upcoming Releases more valuable without hurting games that wish to shift their release date."

He remarked, “It's also super important that devs get to control their own release timing so we don't want to mess with that."

GameDaily reached out to Rose for reaction to today’s news. “I think overall it’s a good solution,” Rose told us. “A big problem with the way that devs exploit the features of Steam, is that unfortunately it means Valve are forced to make that feature less flexible for every other legit dev — e.g. when they changed how Steam Trading Cards work. But it can’t really be helped, and it isn’t Valve’s fault.

“The console platforms (Xbox, PlayStation, Nintendo) are super nonflexible for a lot of these very same reasons, and this is just Valve having to finally lock some of their systems down because some devs just want to be the worst and spoil it for everyone else.”

We also asked Rose if he could at least understand the perspective of a developer who’s manipulating Steam out of desperation to improve their chances at success. The problem with those individuals, he said, is that they are directly hurting other indies in the process.

“If you manipulate a system so brazenly like this, you deserve to be called out,” Rose said. “You’re knowing[ly] making it harder for other devs, so there’s no reason anyone should feel sorry for you in this situation.”

With Valve having fixed the exploit, what should developers who need a discoverability boost be doing? Rose advised that indies need to engage in a genuine marketing effort for their games involving “Discord community building, wishlist building, newsletter building,” and more.

“At the end of the day, the main advice is, [to] not rely on Steam to sell your game,” he explained. “You have to put in all the legwork to sell your own game, and once you’ve done that, a lot of the Steam featuring elements can come into play and help you bump your numbers up. But you should never rely on those, and always assume it’s on you — that way, you aren’t caught out.”

Steam has been under the microscope for some time now, especially when it comes to curation and waffling when it comes to censorship of certain games. According to Jan-Peter Ewert, head of Valve’s business development, 13.5 million first-time purchasers joined Steam from January through April of last year. Moreover, as of January of this year, Steam had 90 million monthly active users. The expanding audience is tantalizing for developers, but just as with mobile storefronts, the overcrowded nature of Steam makes it incredibly difficult for the average developer to get noticed. Valve hasn’t made great strides in helping indies with discoverability, but the company did unveil a trio of new initiatives in its Steam Labs project last month.

Steam is facing increasing pressure from competing storefronts such as Discord and Epic Games Store (EGS), the latter of which has brought on developers with a generous 88/12 revenue split. Steam remains the king of PC gaming (a market worth about $35 billion according to Newzoo), but it’s no longer undisputed.

As Newzoo’s Guilherme Fernandes commented in May, “EGS has established a strong foothold in the industry and is the fiercest competition that Valve has faced in over a decade. Epic Games promises to continue developing and improving the store's features. In the long-run, both Steam and EGS will probably continue to exist as they cater to slightly different audiences, the latter focusing on a more curated store and also having a larger share of less experienced gamers in its userbase, which originated from Epic's Fortnite.”