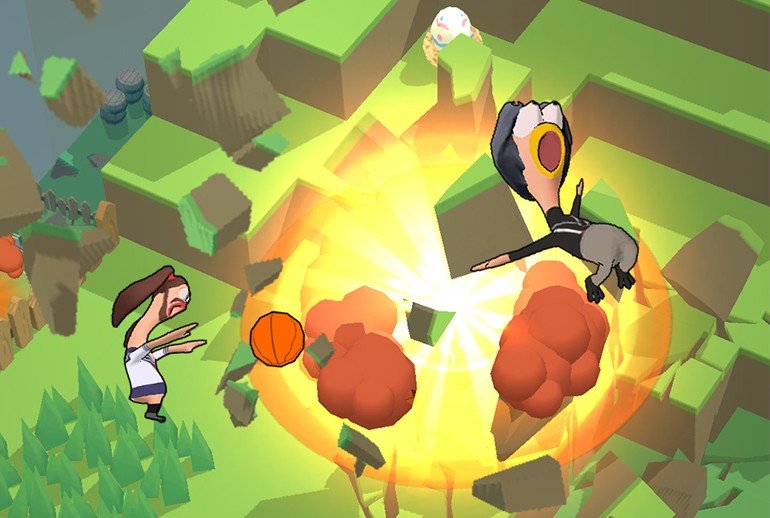 Mixing rubber chickens and explosions, Jericho Games’ Screaming Chicken! won over many people at GameDaily Connect Asia 2019. With players scrambling to blow up their friends in chaotic multiplayer maps, steadily eroding the map beneath their feet with all of the detonations, it made for a compelling, ridiculous time for those who took some time with it.

With this wild and silly play style, Screaming Chicken! won the Audience Choice Award at Indie Prize and an iDreamsky China Choice award as well. Given the developer’s desire to see the game “blow up” (apologies for the pun), this was a tremendous success for Jericho Games.

“From the beginning, we intended to explore emotionally engaging themes of humor and joy. This was for several reasons. Firstly, we find that these emotional elements rarely appear in commercial games. Secondly, we find that joyful, funny games are very suitable for viral transmission based on video,” said Teng of Jericho Games, developers of Screaming Chicken!.

Humor can be a powerful thing in games, creating the kind of videos that many players would want to share with their friends and other players. Laugh-out-loud mayhem just naturally suits that kind of viral sharing that gives games a real surge in popularity. Goat Simulator, a silly physics game about a goat with a sticky tongue and a penchant for mayhem, would recoup its studio’s development costs for the game within ten minutes of going on sale. In four months, it generated more revenue than Coffee Stain (developers of Goat Simulator) had made with its games in four years, according toPolygon. Humor can make for a huge viral push, making it a smart move for the studio.

Working to create this kind of silly game meant studying other humorous titles. “We have learned from many joyful games like Human Fall Flat, Gang Beasts, and Stick Fight,” said Teng.

Studying the giants of silly gaming would help, but there were still many challenges to be overcome. A big one for the studio was in creating a great deal of content for their game. “Using limited resources to produce a mountain of content is a problem faced by every tiny team,” said Teng.

How do you make the player feel like there is a great deal of content within the game when you have a small team, or can only do so much. For Jericho Games, the solution came through creating a game where the emergent player behaviors within these spaces made each game feel fresh and unique. The unexpected behaviors, enhanced and guided by the stages they created, would make each match stand out.

“Through the combination of props, scenes, and traps, a number of levels are designed in which the core operations are similar, but the experiences are significantly different. At the same time, the use of the games’ features resulted in a large number of players doing unpredictable things during the game, enhancing the joy of play,” said Teng.

That doesn’t mean the developer doesn’t need to work hard to create a great deal of content for the game. For this, Jericho Games worked on creating tricks and streamlining their processes so they could continually keep pushing for more content to make their game better (and sillier).

“We are always trying our best to improve our productivity. We do this with development of easy-to-use map editors and GM tools, as well as choosing the art style based on cube plots. These are all for efficiency,” said Teng.

They also take the time to consider the use of each new element to ensure it enhances the whole, making each new addition worth the time needed to create it. “When making weapons and traps, the producer lists the plans at first, and then scores the props from various angles of our design goals. At the same time, we consider the interaction between the new and existing props to enhance the coupling of these elements,” said Teng.

Using humor and working efficiently helped things move along smoothly for Screaming Chicken!, ultimately leading to the accolades Jericho Games just received. Despite their successes, Teng still sees many difficulties ahead in the indie space, for themselves and other creators. “In general, the environment for indie studios has become worse in recent years. Not only is the market competition fierce, but there is also the danger of being crushed by the works of large studios. However, games belong to the cultural creative industry, so no one can create an absolute monopoly and latecomers will always have opportunities,” said Teng.

They still have some hopeful advice for those looking to strike out in this difficult space. A big part of that comes from finding that niche that works for you, or that aspect that makes you stand out, and pushing hard to drive it to the forefront.

“For indies, I think they should strive to find promising segments and keep accumulating them to form a comparative competitive advantage. In order to break through in extremely harsh environments, it is important to figure out which specific subdivision you want to explore and stick to the end,” said Teng.

For Jericho Games, that push came from humor, using a natural silliness to make each game match feel unique, to make the most of the development time by tweaking the game around creating those silly moments, and in creating the kind of fun that naturally leads to shared viral videos and experiences.

Using laughter as a launching pad, the studio hopes to continue making fun experiences for players to enjoy. When asked about the future, Teng said that “…we intend to comprehensively improve the quality of the game (including graphics and gameplay), and we hope to advance the team's development capabilities through successful console games while establishing a reputation among the player community. After that, we will continue to produce high-quality casual games.”

The challenges any indie faces can be daunting, but for Jericho Games, a laugh might not only brighten the mood, but may also be their best chance at finding success.