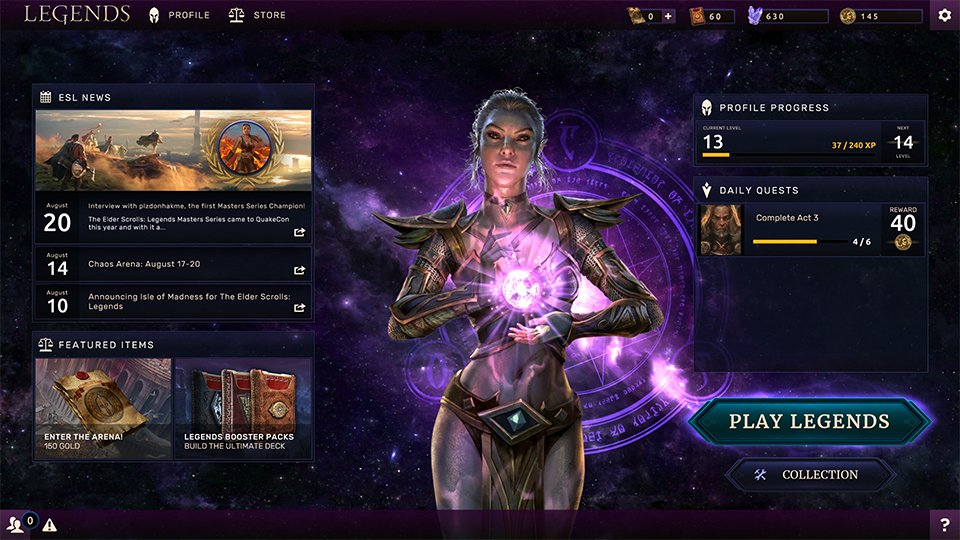 Bethesda has announced it has suspended ongoing development of The Elder Scrolls: Legends.

The collectible card game (CCG) was announced at the publisher’s first E3 press conference back in 2015 before fully launching in 2017 after several betas, and was seen as the series’ big take on the CCG genre after the success of Hearthstone: Heroes of Warcraft.

However, the company has now pulled the plug on ongoing work on the game. It confirmed that no further expansions are coming and the long touted console versions of the game, announced last year at E3, are all but canned in name.

Bethesda confirmed that the Asia-specific version of the game will still launch via GAEA, run separately from the western version, and that would inform a final decision on whether new content drops and overall development will resume. But otherwise, no new expansions and other content will arrive.

“Our previous roadmap indicated we would be releasing one more set this year. We decided to put any new content development or releases on hold for the foreseeable future,” said the company in a post on the game’s Reddit. “This decision will not in any way affect the release and development of GAEA’s Asia-specific version of Legends, which is operated separately, but will inform our decisions on content and feature development going forward.”

TESL will still see “ongoing maintenance support” according to Bethesda, as well as monthly reward cards and regular in-game events. Players will still be able to play the game online and in single-player across the platforms it’s currently available on (PC, mobile, tablet). In addition, Bethesda is giving away a new content drop known as The Tamriel Collection that’ll contain a mix of new, three-attribute cards and more to all players when they next log in for free.

But otherwise, unless the Asian version of the game does significant numbers to change the needle the other way, new updates for Legends are basically done. And in the games-as-a-service world, ceasing updates is essentially a death knell.

The Elder Scrolls Legends came at a time when CCGs were gaining popularity as the success of Hearthstone took off, as well as the Elder Scrolls series still coming off the back of the monumental success of Skyrim and the continued uptick of The Elder Scrolls Online. The title had its ups and downs and even switched developers from Dire Wolf to Sparkypants about a year ago.

Many other games in the genre followed, but Legends was the first significant rival to take on Blizzard and what it achieved. But despite that and somewhat halfway decent traction with its playerbase, Legends never got to Hearthstone levels in terms of mindshare and popularity.