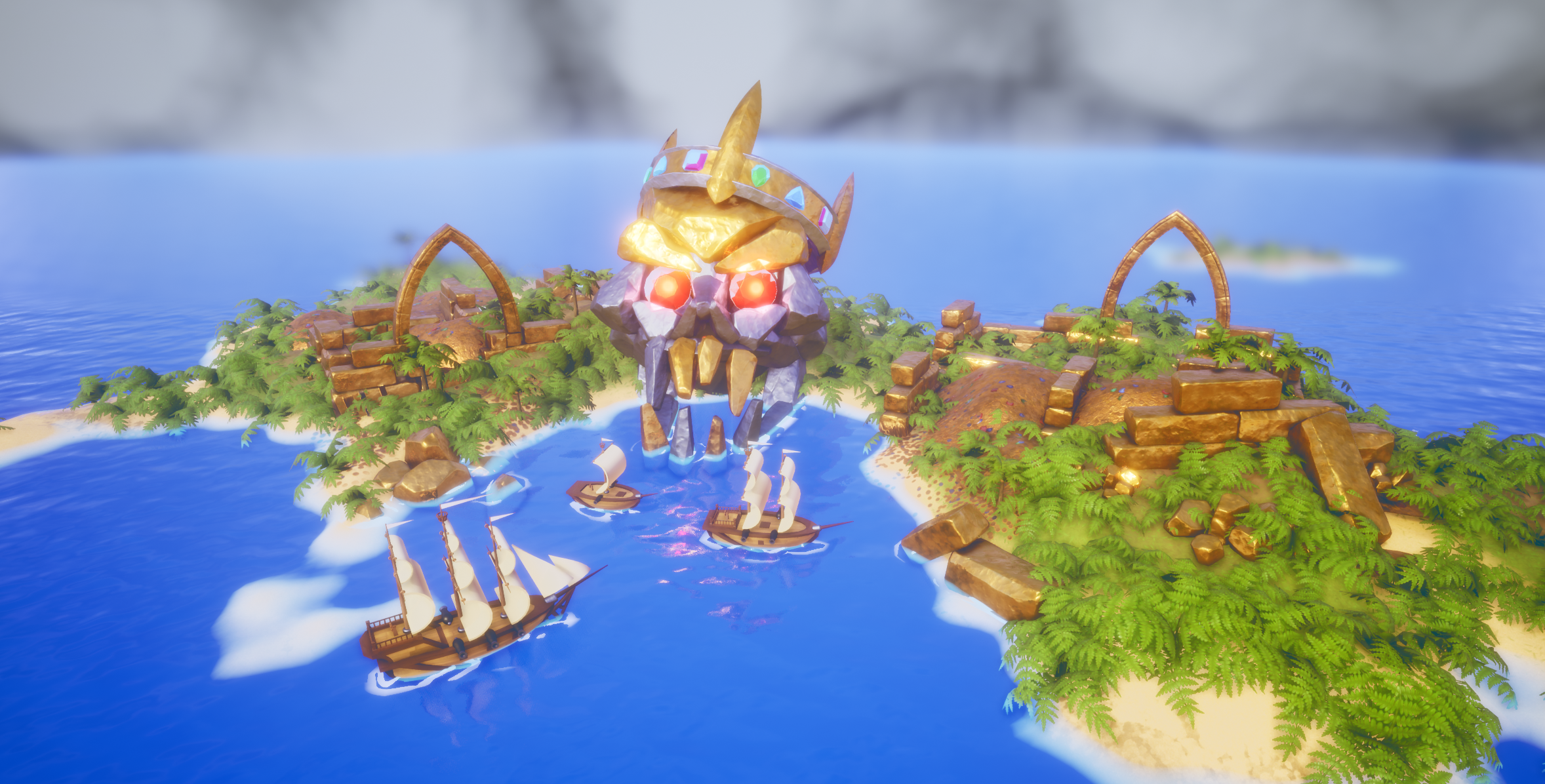 (Update 3/16/2020) GameDaily has been following the Core development platform for some time now. Today, Manticore opened up its Alpha "all-in-one game construction kit," which you can access at coregames.com. The idea is to bring together first-time game creators and experienced developers in one sandbox environment that could potentially redefine the entire game development process. We had an hour-long video conference tour last week with Frederic Descamps and Jordan Maynard, who showed just how quickly anyone can open Core, build whole worlds and features, and iterate. In fact, the team at Manticore believe that this could radically improve game prototyping for professional game devs while also impacting collaboration and remote, distributed development across teams and studios (which is clearly important now in the midst of a coronavirus pandemic).

Just as content creators on YouTube or Twitch can make money or even a full-time living streaming, Manticore sees Core opening the doors to more people to make money on game creation or even modders who just want to make an item or level. There's an educational component here, too, as Core requires no programming expertise but does make intricate game design possible. Universities could easily integrate the development platform to teach the fundamentals of game design to aspiring developers, and indeed, Descamps told us that they have one such partnership already with Cogswell College.

It's early days for Core, of course, but Manticore is working on a couple games to drive the platform internally at the moment. Core is designed for a PC client currently, but Maynard and Descamps are hopeful to bring games that are made on Core to consoles or mobile in the future. We'll have more details on Core in the future.

Manitcore Games, co-founded by industry veterans Frederic Descamps and Jordan Maynard in 2016, is aiming to open the doors to entirely new forms of creativity. The startup has been quietly building up a highly accessible platform for development, called Core, and it’s secured a fair amount of funding along the way, including $30 million last September.

Today, Manticore revealed the appointment of long-time EA executive Patrick Buechner as chief marketing officer to further the company’s mission “to empower anyone to unleash their imagination and become a game creator, like YouTube did for video creation and Twitch did for live streaming.” Buechner was most recently the head of marketing for Amazon Games, but prior to that he served in various roles for more than 17 years across EA divisions including Maxis and BioWare. Before user-generated content’s impact was felt in products like Roblox and Minecraft, Buechner witnessed first-hand how vital user-generated content could be in Will Wright’s The Sims and Spore.

While announcing his new position at Manticore, Buechner reflected on what made The Sims (which turned 20 years old today) so special to such a wide swath of gamers.

“There are many ingredients for the success of The Sims: It was another novel game experience from Will Wright, the creator of SimCity. It hit the zeitgeist of reality TV just as it was emerging. And it appealed to a wide spectrum of creators through its architecture tools, accessible modding, and tools that allowed easy sharing of UGC,” Buechner said.

“When Jordan Maynard (co-founder of Manticore and a teammate of mine on Spore) first demoed Core to me, I had that same feeling I’d had the first time I played with the early building tools in The Sims - it was magical! He built a multiplayer first-person shooter in about six minutes from templates in Core. Then within seconds it was published and playable. I asked him if he could add helicopters to the game - he quickly opened up a different game, found some choppers, hit CTRL-C, went back to the original game, hit CTRL-V, and they were patrolling. Like magic!”

Buechner believes that it would have taken a traditional development team months or even years to create what Maynard did in mere minutes. And yet, Manticore is striving to make this sort of creation possible for individuals without any specialized coding or design skills. “When I saw Core in action, I thought, ‘You put a game studio in a box and are giving it away for free’,” Buechner remarked.

Core is powered by Unreal Engine, but it isn’t necessarily being pitched as a replacement for Unreal, Unity or other common toolsets. Rather, Buechner explained to GameDaily that it’s designed to be more powerful in the hands of an experienced developer but to be just as accessible to someone who has zero development experience.

“I’ve worked in the industry for 20 years and on almost every team, when a game was delayed or canceled, we would say, ‘Turns out making video games is hard.’ But what if it wasn’t? What if you combined the power of Unreal with a platform that made it easy to create, publish, and play multiplayer games? That’s an appealing proposition for experienced game developers, students eager to join the industry, hobbyists and modders, and gamers who have no art or programming experience but do have a great idea,” he told us.

“With Core, making a game is so much easier and faster than before. It’s as complex as you want it to be, so someone with game development experience can still use Lua for scripting gameplay, while someone without any experience can take advantage of shared creator templates and other content to bring their idea to life.”

User-generated content has become more popular than ever thanks to titles like LittleBigPlanet, Roblox, and Minecraft. According to Media Molecule studio director Siobhan Reddy, there’s now an expectation from players that they should be able to create and share, not just play.

“I think particularly in this generation of young people [who] have all grown up playing things like Minecraft and Roblox, the idea of games being just closed, is something that they're completely unfamiliar with,” she said at the GameDaily Connect show in London last year.

Core is clearly honing in on this trend, but unlike those aforementioned games, Core isn’t tied to any particular IP. It’s wide open, and Buechner believes that’s going to be incredibly empowering.

“One of the advantages of Core is that it isn’t pigeon-holed to a certain genre, age demo, or IP. In that way, Core provides a broader canvas to work on and a larger audience to reach. Our vision is to create a new ecosystem for creativity in gaming and inspire a whole new generation of creators,” he said.

For Buechner, one of the cornerstones of success for a platform like Core will be ensuring that its community is continually engaged. That’s one of the key takeaways from years of working on titles like The Sims, Mass Effect 3 and Star Wars: The Old Republic.

“Community has been central to the success of The Sims and BioWare’s RPGs and is a priority on Core,” he stressed. “We’re investing in both the player community and creator/dev relations. Core isn’t just a creation tool or marketplace, it’s a complete ecosystem for creating, sharing, and playing games. Supporting the community within that ecosystem is going to be paramount to the success of Core and we’re committed to providing creators and players with the resources they need to unleash their creativity. We are amazed at what the nascent community of creators who are part of our Alpha are already creating together!”

We asked Buechner if there was something in particular that he picked up from design legend Will Wright while working with him at Maxis. The industry’s changed quite a lot over the last couple decades, but there are some universal principles, especially those that come from Wright, that stand the test of time.

“Jordan… [who also] worked on Spore, often talks about the lessons he learned from Will and is applying to Core. One of the most important is opt-in complexity,” Buechner shared. “The team is making creation and tools accessible to power users (professionally skilled developers) all the way to players who may want to simply tweak a game for their friends (maybe change the size of a map in a shooter, or the type of monsters in a dungeon crawl). And of course we hope Will will check out Core himself! It’s ideal for his type of big, experimental game ideas and constant iteration.”

It’s still early days for Core, and the business model hasn’t even been fully fleshed out yet. Buechner said that’s coming soon, but noted that it’s free-to-play and free to use. We’d presume that some revenue sharing model will be at the heart of the platform. Buechner commented, “We are building a platform where creators will be able to earn a living making games.”

How exactly that manifests itself remains to be seen, but if Core can do for game creation what YouTube did for video or what Twitch did for live streaming, the Manticore team will have succeeded in truly transforming the industry in a way never before seen.