Paradox Interactive revenues climbed by 14% in 2019 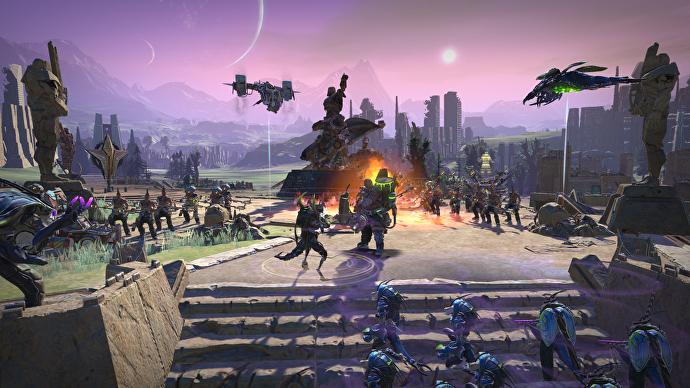 Paradox Interactive, the publisher behind Cities: Skylines, Stellaris, and Battletech, has released its end-of-year earnings report for 2019. The numbers point to an impressive year for the Stockholm-based company, which saw a 14% increase in its revenue compared to 2018. In total, revenue amounted to SEK 1.2 billion ($132 million) for 2019.

“2019 was a year characterized by preparation for the future,” Paradox CEO Ebba Ljungerud said in a statement. “During the year, we invested in game development, performed marketing activities, and built our organisation to give us the best possible conditions to develop and publish our upcoming games.”

It was the publisher’s back catalog of games that did most of the heavy lifting, especially in Q4. The report cites impressive performance from Battletech, Cities: Skylines, Europa Universalis IV, Hearts of Iron IV, and Stellaris as the main drivers of revenue for Paradox during the last quarter.

According to Carter Rogers, principal analyst at SuperData, Paradox has spent years polishing its reputation as a go-to publisher for PC strategy games, a genre that boasts little competition.

“Paradox has really established itself as the go-to company for PC strategy games, and its titles have limited competition--namely the Civilization and Total War franchises,” Rogers told GameDaily. “Since its games are treated like platforms that are supported for years, players are comfortable regularly purchasing downloadable content.”

Rogers said that while only 35% of U.S. PC gamers regularly play strategy games, this segment is extremely valuable and devoted, and are more likely to purchase additional in-game content.

Recently, Paradox made several games available through new distribution methods, including Xbox Game Pass for PC, which has helped to signal boost many of its most popular titles.

For Rogers, Paradox’s willingness to test out such distribution methods is a smart move.

“Paying for several years of additional content to ‘catch up’ might seem daunting to a new player,” he explained. “Publishers of online games like World of Warcraft have previously done things like make old expansion packs free in order to catch newcomers up. Subscription services are appealing to investors since they can lead to dependable, recurring revenue. They also reduce the pressure for every new game or expansion to be a hit.”

“In November, we released our first expansion for Prison Architect since we acquired the game and the brand in December 2018,” the statement reads. “In the same month, we also released our first expansion to Age of Wonders: Pla­netfall. It is also gratifying to see how our continuous improvement work with Imperator: Rome now has be­gun to yield concrete results. At the end of the fourth quarter, after a series of updates, Imperator: Rome reached its highest player numbers since launch, and the game has gone from mostly negative to most­ly positive user reviews on Steam.”

The resurgence in popularity for some of Paradox’s classic titles has resulted in record numbers in terms of player count; more than 4 million unique monthly users were reported across the entire portfolio, which is a 30% increase over 2018.

Recent years have seen a number of significant acquisitions and business moves for Paradox, including the purchase of White Wolf in 2015 and Harebrained Schemes in 2018. The publisher also opened Paradox Tectonic Berkeley, California last year.

Looking forward, in 2020, Paradox will be publishing Vampire: The Masquerade - Bloodlines 2 by Hardsuit Labs, Empire of Sin by Romero Games, and Crusader Kings III by Paradox’s own internal development studio.

Rogers said that the success of Bloodlines 2 is going to depend on a few factors. First, the sales expectations set by Paradox are going to be very important to investors and shareholders, and making that outlook attainable is key. Also of concern is the “immersive sim” elements of gameplay.

“The original game is considered a classic, and odds are the sequel will be a critical success,” Rogers commented. “The commercial picture, however, is less clear. Based on early previews, Vampire: The Masquerade - Bloodlines 2 looks like it has many elements commonly seen in ‘immersive sim’ games. Titles in this subgenre usually give players lots of options for overcoming obstacles and often have compact, but highly-detailed levels. Unfortunately, during this console generation, immersive sims such as Dishonored 2, Prey, Hitman 2 and Deus Ex: Mankind Divided have not set the world on fire in terms of sales numbers.”

Paradox has shown impressive business aptitude in recent years as it has expanded its portfolio and smartly adapted to larger industry trends, and there’s no reason to believe that this will change in 2020. The company’s wheelhouse of grand strategy experiences is still very much a core part of its identity, but it’s casting a wider net these days, and the results speak for themself.