GameDaily.Stream: We Are Fuzzy's Maxx Burman on Sleep Tight, dev culture, and bootstrapping 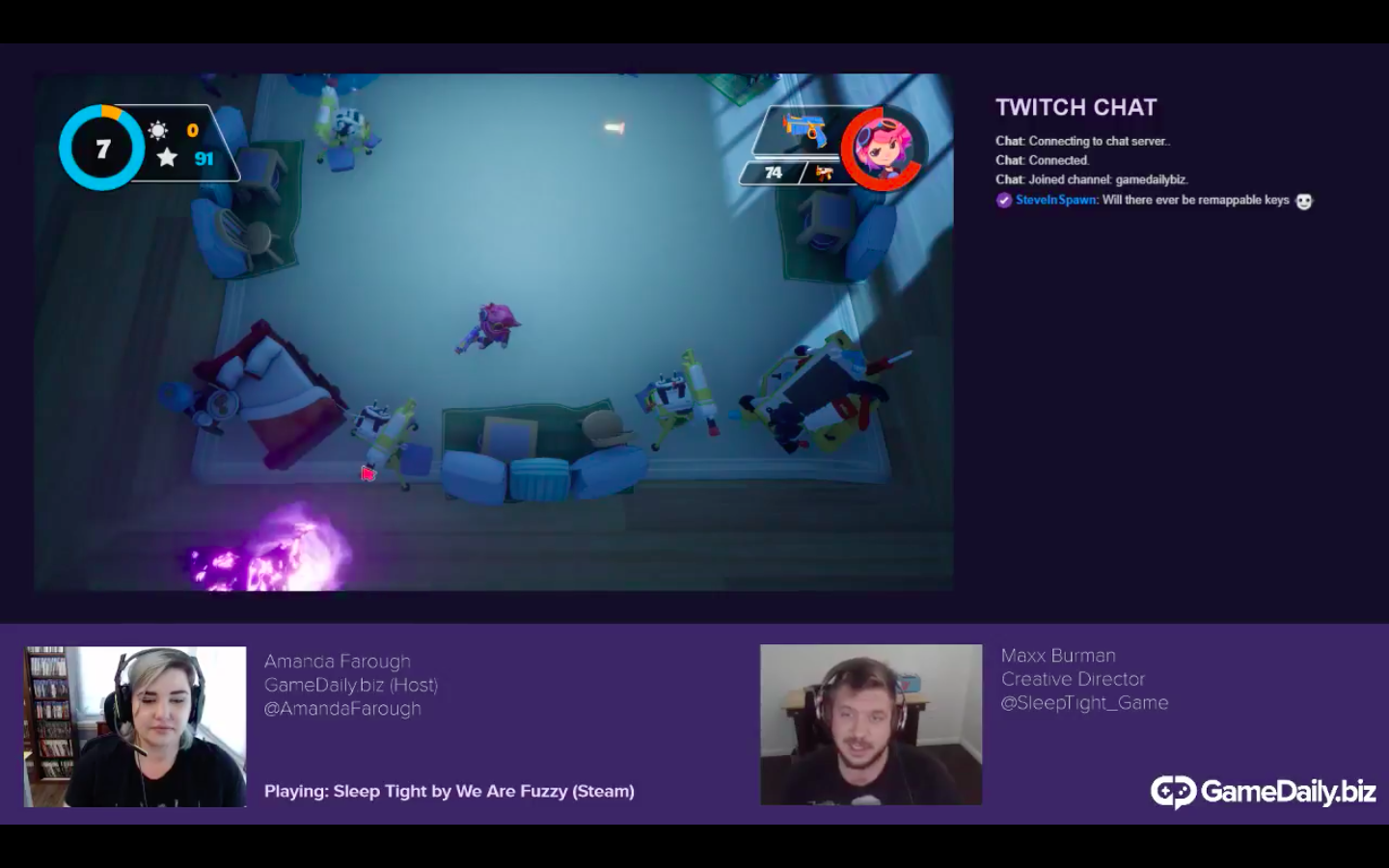 Maxx Burman, Sleep Tight's creative director, is a bucket of sunshine. If there were buckets that could carry sunshine, Burman's positivity would likely fill it up. I first met him at PAX East when I demoed Sleep Tight at their booth and I was instantly taken in by We Are Fuzzy's overall enthusiasm and joy. And I was delighted that he could join me for the second GameDaily.Stream.

On how Sleep Tight (and We Are Fuzzy) started

"My main co-developer, Jed [Jackoway]... he and I have known each other since we were six years old." (And yes, there were blanket forts.) Burman and Jackoway went their separate ways after school, but they found each other after Jackoway sent him a prototype of what Sleep Tight would eventually become.

"About three years ago, I picked up the prototype again one day and was just like, 'Man, I really love this game.' If we were going to do this, because this is a childhood friend and we've talked about making games together, what if I put this childhood art-style together around it?"

The game's loop hasn't changed much since the original prototype, but the presentation has evolved from stick-men to this "Pixar-esque" art style that Burman had become so enamored with. And shortly after they made the decision to start focusing on Jackoway's concept as a fully-fledged project, he spun up We Are Fuzzy with Banks Boutté and they all got started.

On bootstrapping and keeping We Are Fuzzy sustainable

Flashback to E3 last year, shortly before Burman and his team were getting ready to announce that they were ready to launch their game into the world before the triple-A wasteland that the fall has become: here Fuzzy was, minding their own business, when suddenly out of nowhere...

"Banks and I were walking into E3 and as we did, we both got notifications on our phones that they had announced Mario Rabbids and Pokken Tournament. And both of those were on the week that we were going to be releasing Sleep Tight. And we were just going to get crushed. And that was our last window before the fall season started with all the triple-A titles. So were a couple steps into E3, got the notification, turned right around, and walked right out of E3 and went to go get coffee across the street."

They had to move fast if they were going to keep Fuzzy afloat for another year.

What Burman and Boutté ended up doing was pivoting to something that would make them enough money to keep Fuzzy solvent until Sleep Tight came out. Fuzzy doesn't have outside investors. Everything is self-funded and bootstrapped from freelance projects and that year-long pivot.

On "not crunch" and the wildest Sleep Tight story

We Are Fuzzy has deliberately positioned itself against crunch (more at 18:30) and it's not just one decision — it's a series of them.

And this story is too good not to listen to in its entirety so tune into 35:35 for Burman's account of the PAX East Best Buy Blitz.