GDC 2020: LiveOps must put community first, then the money will follow 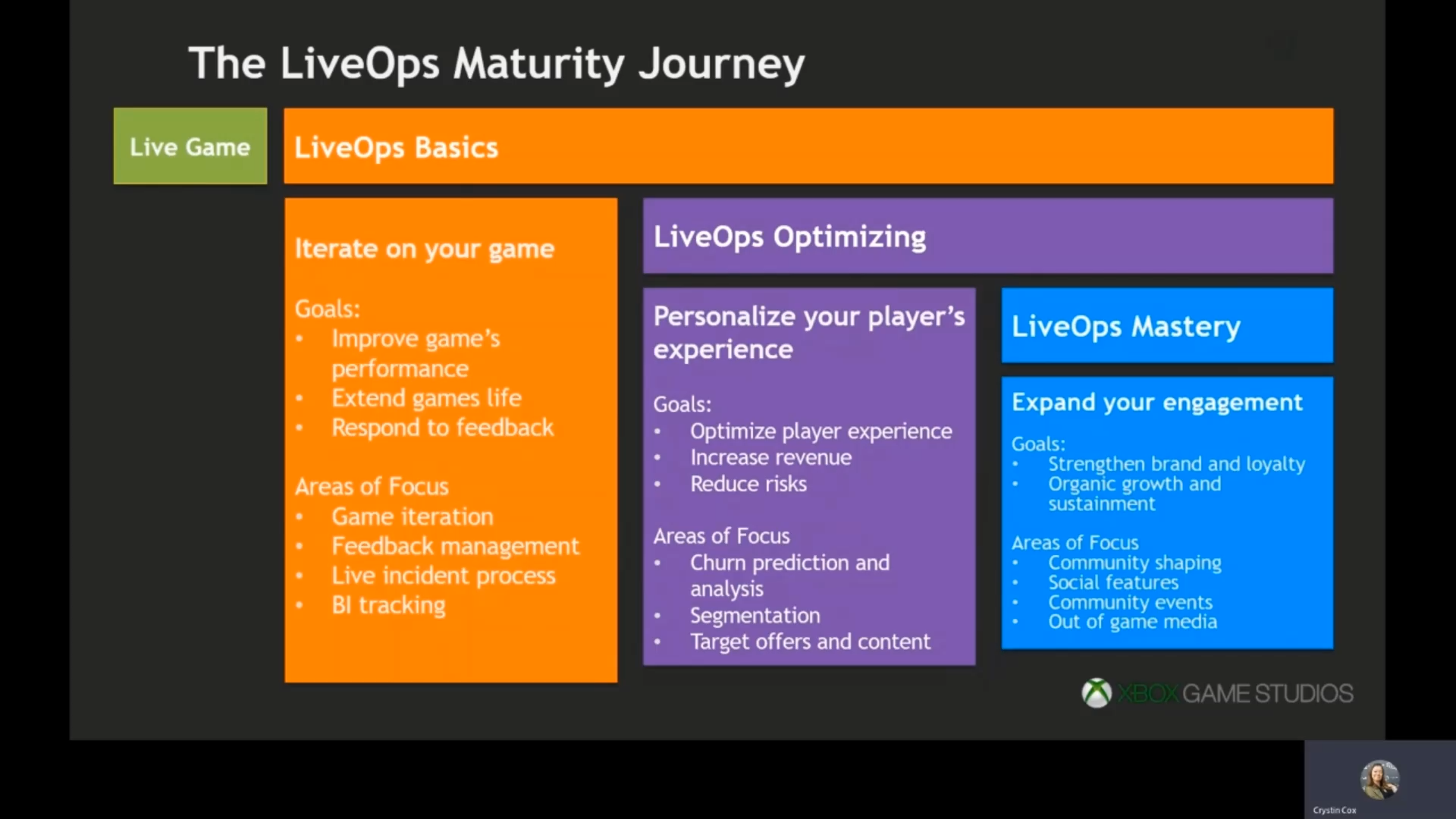 As the games industry has shifted to games-as-a-service (GaaS), many publishers and developers are reexamining the business models historically associated with making games. Today, triple-A game design typically exhibits elements of post-purchase monetization like microtransactions or season passes. However, as Microsoft’s Crystin Cox noted this week in a GDC virtual talk, many studios aren’t adapting properly to this new era.

Cox is the director of live operations at Xbox Game Studios Publishing, and her talk was focused on how studios might better implement live service elements into their games. LiveOps, she said, is defined as the concept and design behind taking care of games over time.

“If we look at the top-grossing games worldwide from 2017 to 2018, we see a list of games that have service components,” Cox explained. League of Legends, Honor of Kings, Clash Royale, and PlayerUnknown’s Battlegrounds all feature on this list, which is characterized entirely by live-service titles. Not all that long ago this wouldn't have been true, but today’s market demands ongoing and consistent revenue streams. This is a result of a shift from “product” style games--discrete, packaged goods that are designed to be consumed--to live-service games.

Cox said that the shift from product games to service games has been tremendous for industry revenues, but game makers have yet to master the smooth and unobtrusive implementation of service elements. LiveOps, she said, provides guidelines to doing just that.

“When we look at games as a service...it tells us a lot, but it’s primarily focused on good service quality, and optimizing experiences through iteration,” Cox said. “What it doesn’t really have is a lot to say about what those experiences should be. We don’t get a lot of clues about how to design the game as games-as-a-service.”

The foundation for a good ongoing game is to deliver a reliable and valuable service, but what shape does that service take? How do you design a game from the bottom up with such a service in mind? In many cases, executives will ask developers to build games that can become a consistent source of income, but don’t provide direction on how to do that.

To that end, Cox outlined the LiveOps process. “LiveOps is a way of thinking about game design and game service that’s been around since multi-user dungeons. These are the precursors to MMOs. They were text-based multiplayer adventures. That’s sort of where LiveOps grew up.”

LiveOps is a marriage between the technical process of making a game--think design and engineering--and the operations side that’s focused on iteration within a game experience. Its core tenant is the ongoing support of a game in an effort to keep it engaging for players.

“The heart of LiveOps is taking care of a game, and taking care of a game’s players over an extended period of time,” Cox said. “In order to do really great LiveOps, you want to start really early all the way back in pre-production. You should be thinking about your progression design, your retention design, your monetization strategy. Then, during production you’ve got to be thinking about what kind of goals you’re setting...how you’re going to do live content, how you’re going to do community feedback. All of these things need to be part of the process of building your game.”

Once a game is launched, you can start looking beyond the broad basics of these concepts at more detailed data, such as live incident reporting processes and feedback management and game iteration. This, Cox said, lays the foundation for building a strong community that is willing to stick with and spend money on your game over a long period of time.

The key is iteration. Do not try to build a perfect game before shipping, Cox said. Instead, improve a game’s performance over time according to player feedback. This in itself requires some forward thinking: if you want to be able to iterate on your game, you need to build a game that is capable of being iterated on.

As an example, Cox pointed to a game that she previously worked on: Guild Wars 2. One of the hallmarks of this MMO is its dynamic world. The various maps boast global timed events and powerful creature spawns that players from all over the zone can tackle. Early in Guild Wars 2’s life, players learned the spawn patterns of these strong enemies known as “champions,” and organized into what Cox called “champ trains” that marched around the map quickly eliminating these enemies.

“The champ train ignored the intended story-driven loops of events, and it removed a lot of the challenge that would come from battling bosses because a Zerg of 100 players can simply steamroll basically everything in the map. This was nothing like what the content designers had intended at all,” Cox said.

At first, the developers tried to discourage this behavior, but the proper solution was not to eliminate champion spawns or global events, Cox explained. Instead, the team leaned into the champ train and rewarded players for doing what they were already doing. The designers tweaked champions to make them harder to kill, which made them better suited to the large groups that were marauding around the zone.

“The truth was that as we were playing the game too, and listening to feedback, the champ train was really fun. Players actually really enjoyed them,” Cox said. “What we saw was actually that players that participated had better engagement, and the maps with good champ trains saw more play time. Pretty quickly we gave in. This emergent behavior is a good thing.”

Following the tweaks, the dev team noticed a strong rise in play time, which came with more player spending on in-game purchases.

It’s this kind of attention to player behavior that’s at the heart of LiveOps. Yes, there are many business considerations to be made, but they’re moot if players stop playing. According to Cox, other methods developers and publishers can utilize to drive engagement include community events, social features that drive interaction between players, and out-of-game media.

“When I think about...the most advanced tactics for LiveOps, I think about expanding your game’s engagement beyond the time players spend playing,” Cox said. “You should be thinking of your game as more than a collection of systems and content. Discussing the game, making fan art, reading tie-in comic books, meeting guildmates in real life...all of these are actually a part of your game.”

The players who spend the most time with a game are the ones most passionate about it, and it behooves developers to take this into consideration. If you want a player to continue to spend money on your game, then you need to incentivize them to do so by emphasizing what appeals to them. In the end, this is the core of LiveOps, and what will foster the continued growth of games-as-a-service. Content leads to players, which leads to a sense of community.