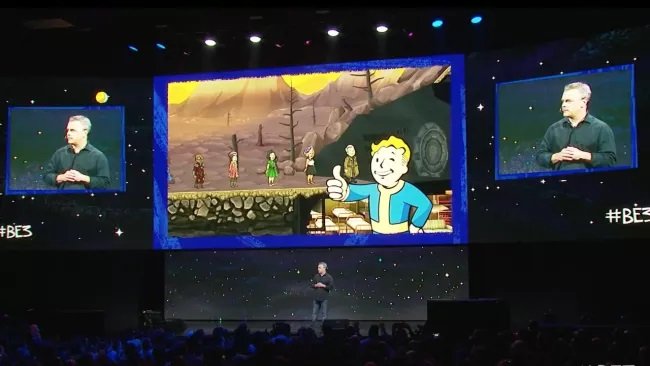 The coronavirus outbreak and subsequent quarantine efforts have had a major impact on most sectors of business, video game development included. Last month, a number of prominent studios announced work-from-home initiatives aimed at staunching the spread of COVID-19. Now, we’re starting to see the impact the pandemic is having on the industry.

After E3 was cancelled due to the virus, many expo mainstays committed to virtual presentations in lieu of the show, including Microsoft, Nintendo, and Square Enix. Bethesda has historically been one of the central presenters at E3, but that changes this year.

On Twitter, Pete Hines, senior vice president of global marketing and communications at Bethesda, announced that the company will not be presenting a virtual conference in June.

“Given the many challenges we're facing due to the pandemic, we will not host a digital Showcase in June. We have lots of exciting things to share about our games and look forward to telling you more in the coming months.”

GameDaily reached out to Hines, but he declined to comment further.

Elsewhere in the industry, COVID-19 is causing game delays as some studios struggle to adapt to work-from-home routines. This includes inXile Entertainment, who announced this week that the release of the hotly-anticipated RPG Wasteland 3 has been pushed back to August.

“As with most companies, we moved to a work-from-home environment some weeks ago, and that’s of course introduced new challenges that many of us throughout the world have been learning to manage,” inXile studio head Brian Fargo said in a statement. “We’ve been excited to see the Wasteland 3 beta so well received, but the reality is that with these new logistical challenges our release was going to be impacted.”

Amid all these delays and show cancellations, many have speculated that we could see an impact on the imminent launch of next-gen hardware from Sony and Microsoft. There’s been no statement from the Microsoft camp regarding changes to the Xbox Series X launch date, and last week, Sony insisted that the PS5 is still on track for a holiday 2020 release, though the company is less concrete on the software side of things.

“Sony estimates that there will be no material impact on [the video game] business for the current fiscal year,” the blog post reads. “Although no issues have emerged so far, Sony is carefully monitoring the risk of delays in production schedules for game software titles at both its first-party studios and partner studios, primarily in Europe and the US.”

In February, Sony was apparently experiencing manufacturing problems that resulted in speculation regarding the production and retail costs of the PS5 console. It’s easy to imagine that this wrinkle was exacerbated by the onset of the coronavirus pandemic, but the company is remaining steadfast in its current hardware plans.

Despite potential delays in software and hardware, the World Health Organization has recommended turning to gaming as a means to stop the spread of COVID-19. The #PlayApartTogether campaign is predicated on the fact that video games are a good way to practice social distancing while still interacting with others.

“I thank the games industry for stepping up to help bring an end to the COVID-19 pandemic,” Ray Chambers, US ambassador to the WHO, said in a statement. “We hope this campaign to #PlayApartTogether encourages even more people to stay safe and healthy while they help flatten the curve and save lives.”

It’s not surprising that the industry is feeling the squeeze as the world screeches to a halt. Still, the fact remains that many are turning to games in this age of quarantines and self-isolation. It’s disappointing to see delays, but certainly understandable. Games may be a prime way to entertain yourself during a pandemic, but these are trying times and the human cost of development far outweighs our need for entertainment.