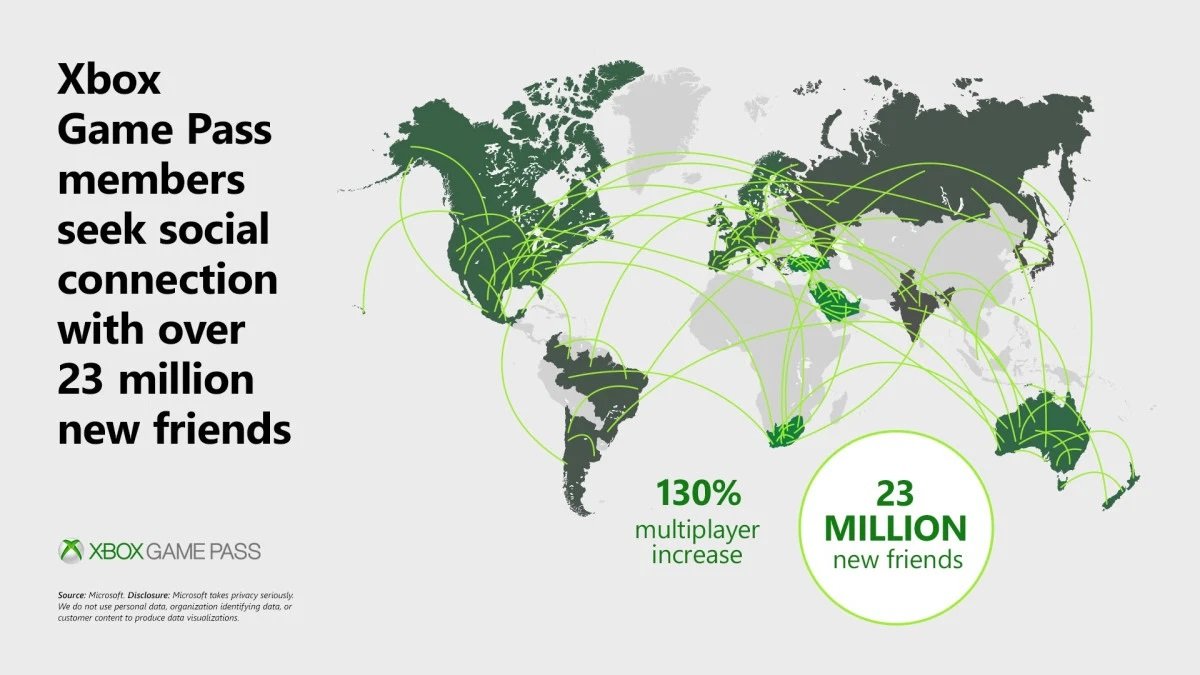 In an interview with Business Insider earlier this week, Xbox head Phil Spencer said that the brand is enjoying a “big flood of new people” into its ecosystem. Yesterday, during Microsoft’s Q3 2020 earnings call, we got a sense of just how big that flood is. According to Microsoft CEO Satya Nadella, Xbox Game Pass now has over 10 million subscribers worldwide, with 19 million active Xbox Live users.

“People everywhere are turning to gaming to sustain human connection while practicing social distancing, and we continue to deliver new, exclusive first- and third-party content to attract and retain gamers,” Nadella told investors. “We saw all-time record engagement this quarter, with nearly 19 million active users of Xbox Live, led by the strength on and off-console.”

In a blog post today, Spencer elaborated on XGP’s impressive numbers, noting that the rise in XGP subscribers has come along side a 130% increase in multiplayer gaming, and 23 million new friend connections across 41 countries on Xbox Live.

“We’re humbled by the reception to Xbox Game Pass,” Spencer wrote. “It’s changing the way we play and discover games together, and it inspires us on our journey to help people connect through gaming.”

Of course, these numbers have been boosted by the COVID-19 pandemic, which has caused many people to turn to gaming as a primary form of entertainment. It would be easy for Microsoft to simply reap the rewards of a consumer base that’s consuming entertainment at an unprecedented rate, but Spencer wants to make sure that Xbox doesn’t exploit a global crisis for unreasonable gains.

"We want to be very thoughtful and not exploit the situation,” Spencer told Business Insider. “We're not putting in place any different business tactics or other things. We're just trying to keep all the services up, trying to keep the games enjoyable, keeping our networks safe and secure. And being there at a time of need. I'm proud that we can provide this activity for people."

The rise in Game Pass users bodes well for Spencer and company’s ambitions to turn Xbox into a brand ecosystem spread out across a number of platforms and services. The Series X console will assuredly play a central role in growing Microsoft’s gaming business, but it’s services like Game Pass, Xbox Live, and xCloud that will do a great deal of the heavy lifting.

“Xbox Game Pass is now core to the Xbox service and content offering, so it will play an important role in the next generation,” Piers Harding-Rolls of Ampere Analysis told GameDaily. “While Sony has its own subscription offering in PS Now, it has been unable to compete with Microsoft on new releases going into the service. I don’t see that situation changing in the near future, so XGP is a great differentiator for Microsoft.”

Harding-Rolls said that subscription services are becoming more important to the games landscape, and we should expect to see a greater shift toward this monetization method in the coming years. However, brands should consider subscriptions as supplementary to their primary offerings.

In addition to subscriptions, cloud gaming is poised to play a major role in the next generation of consoles. Cloud computing is already well within Microsoft’s wheelhouse thanks to its Azure tech, which is far and away the most lucrative segment of the company’s business. It’s also been testing Project xCloud to great success, according to Nadella.

“Our Project xCloud gaming service now has hundreds of thousands of users in preview across seven countries, with eight more launching in the coming weeks,” Nadella noted during the earnings call.

While the cloud has proven to be a boon to Microsoft’s business, Harding-Rolls explained that scaling the technology up to commercial levels is a daunting--and expensive--prospect.

“Cloud gaming is much harder to commercially scale when compared to download services. Cost of service delivery means that additional operating costs will need to spread across the distribution chain and I’m not sure there is a significant appetite for that,” he said.

Cloud concerns aside, Harding-Rolls said that there’s no denying the impressive total package Microsoft has been assembling in the buildup to the Series X launch.

“Microsoft has done a very good job of growing the user base through aggressive marketing and taking a hit to the bottom line,” he noted. “It shows that a games subscription service can be appealing to a large number of people if the content is right, but that the commercial benefit of this type of offer can only be fully realized alongside other forms of monetization.”

All told, Microsoft’s multifaceted approach to the next generation of console gaming has been notable from a marketing perspective. The slow-drip rollout of new information has done a great job of tantalizing consumers about the Series X. As we draw closer to the launch of the console, and we continue to navigate the pandemic crisis, expect Microsoft to divulge new details about how its next-gen plans with the Xbox platform, especially after next week’s gameplay reveal livestream.