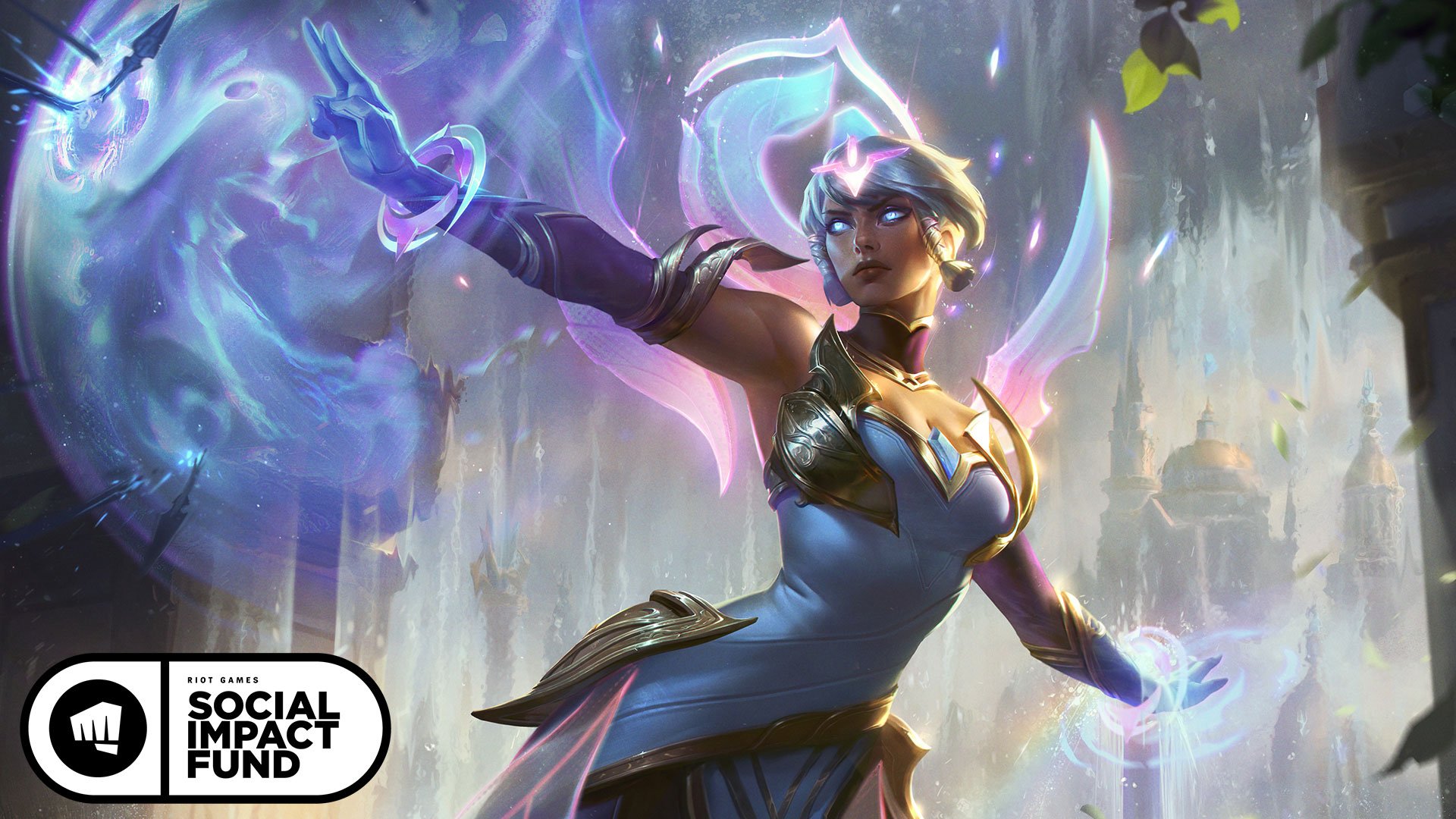 Late last year, Riot Games established the Riot Social Impact Fund, a philanthropic fundraising venture aimed at benefiting a number of global nonprofit organizations. Now, roughly half a year later, the fund has raised more than $10 million through in-game promotions and direct donations from League of Legends players and Riot itself. One of the more substantial efforts was the Dawnbringer Karma promotion, which saw more than $6 million raised.

The origins of the Social Impact Fund stem from Riot’s desire to make a positive global impact, Burrell said. However, regulations abound concerning how a for-profit company can handle charitable capital, so Riot established a separate organization in order to take care of the nuts and bolts.

“Over the years we’ve always tried to find unique and engaging ways to create social impact with our players and the community. However, there are a lot of legal and logistical complexities for how a for-profit organization can raise, retain, and distribute charitable dollars,” Burrell explained. “With the creation of the Riot Games Social Impact Fund, we’re able to make direct investments into a variety of global organizations aimed at solving some of the world’s most pressing problems.”

The formation of the fund has also allowed Riot to experiment with its fundraising efforts, Burrell said. For example, the most recent initiative utilized funding pools for the three major regions where Riot has an office, and players were able to vote on which nonprofits benefited most. The winning organization would get 50% of the funds raised, with the other two receiving 25% each.

“As a global company, we have the opportunity to look at social impact from a global lens,” Burrell said. “The Social Impact Fund allows us to better leverage our platform to address meaningful change in all areas of the world.”

Riot works with more than 50 nonprofits worldwide, focused primarily on regions where the studio has established offices. In the Los Angeles, California area, one of those organizations is City Year, an outfit dedicated to helping young residents of underserved communities thrive in education.

“We believe that developing the skills and mindsets of all children and young adults contributes to strong, vibrant communities. Drawing from our 30 years of experience in youth development, City Year helps students and schools succeed by delivering holistic support to students, classrooms, and the whole school,” Julia Connolly, managing director of development at City Year Los Angeles, told GameDaily.

The City Year approach is called “Whole School Whole Child,” which Connolly said centers around identifying which students are most at-risk to fail out of school. The method utilizes three criteria: attendance, behavior, and course performance in math and language arts. A team of AmeriCorp members work closely with at-risk students to establish a rapport and ensure they have the critical skills necessary to blossom in school.

“The relationships that AmeriCorps members build with their students enable the trust, support, and confidence necessary for students to acquire critical skills and mindsets, and engage more deeply with their learning,” Connolly said. “Through their work with students in classrooms and after-school programs, City Year AmeriCorps members help to create an environment where students can take calculated risks in their learning, and where everyone--students, teachers and families--can feel connected to the school community.”

Riot’s relationship with City Year dates back to well before the establishment of the Social Impact Fund. For five years, Riot has been sponsoring a team of AmeriCorps members that provide full-time academic and social-emotional support to students at Jordan High School in the Watts neighborhood of LA. Additionally, every year, Riot participates in a “school beautification day” where team members and their families paint murals and clean up school campuses in the area.

“Through their partnership with City Year Los Angeles, Riot has had a tremendous dual impact, ensuring that high school students reach their full potential while also supporting the experience and professional development of the team of AmeriCorps members who deliver student support,” Connolly said.

Of course, the big story this year has been the coronavirus pandemic, which has impacted every societal sector imaginable, nonprofits included. Connolly said that school closures, which began in mid-March, have disrupted City Year’s operations in an unprecedented way. The nature of the AmeriCorps members’ work sees them in close proximity to their students. Without the ability to sit side-by-side, City Year has had to make adjustments to its operations.

“We have swiftly adapted to respond to the ever-evolving needs of students and shifted to virtual academic and social-emotional support, to help provide relationships, care and connection during this very challenging time,” Connolly explained. “Our staff and AmeriCorps members are joining our school partners in distance learning while keeping a close eye on the horizon.”

She said that once schools begin to reopen, the teams will be there on day one in order to ensure that students can quickly reconnect with the educational environment and re-engage in learning.

“We are committed to remaining a steadfast pillar in the schools we serve in Los Angeles and Inglewood amid and after this crisis.”

Regarding the pandemic’s effect on the Social Impact Fund, Burrell noted a strong rise in donations in recent months.

“The generosity from everyone around the world has been remarkable,” he said. “We’ve seen an increase in donations and people reaching out to see how they could be able to help, which is really inspiring.”

Burrell said that there are three main areas that the fund is focused on: education, opportunity, and citizenship. While pandemic conditions have certainly disrupted Riot’s efforts, they have also provided an opportunity to prove that the company can adjust to a tumultuous environment. Burrell cited the concept of “adaptive leadership,” which states that organization leaders need to stay nimble and agile in the face of uncertainty.

“There’s the technical challenge of helping people stay safe and healthy and getting medical supplies and support to the heroes on the medical front line,” he explained. “But there is also the adaptive challenge of what our ‘new normal’ looks like in a few months or a year.”

To that end, Riot is aiming its coronavirus relief efforts at three key areas to address both the technical and adaptive issues at play: supporting medical and healthcare professionals; providing education and preventative support; and providing funding to the organizations most negatively affected by the pandemic. Burrell said that, right now, the fund is most concerned with nonprofits focused on climate change and groups within the games industry that are helping players live healthier, more productive lives.

The fund’s primary source of capital comes from in-game fundraisers that Riot hosts on a fairly regular basis. The team has also been experimenting with charity streams, where players and viewers are able to directly donate through their favorite platforms and content creators. Like with any nonprofit, though, the Social Impact Fund accepts donations at any time.

Burrell said that Riot aims to be the most player-focused company in the world, a lofty ambition that is reflected by their “corporate social responsibility” strategy. When selecting which nonprofits to work with, Riot takes their global audience into account.

“We survey our players in different regions to find out what causes are meaningful to them, then go to work to identify, vet, and form partnerships with organizations that support those causes,” he explained. “What matters to players in Korea could be very different from Brazil or France.”

Riot Games has always been vocal about its charitable activity, but recent years have called into question its commitment to diversity and inclusion. In 2018, an in-depth report from Kotaku revealed an environment of harassment and exclusion, and the resultant lawsuit has been ongoing ever since. The studio has made some public-facing moves to address its newfound reputation, such as hiring Francis Frei and then Angela Roseboro as chief diversity officers, but public perception on how effective these moves have been remains mixed.

Still, the Social Impact Fund is doing respectable work as far as City Year is concerned.

“Riot Games has been a great partner and one of our strongest champions,” Connolly said. “We work with them throughout the year to support our city’s youth.”

For Burrell, it’s the work that goes on behind the scenes that he’s most proud of.

“I’m proud of our immediate team, our leaders, our partners, and all of the teams at Riot that help bring these ideas and investments to life,” he said. “Ideas are always met with an open mind and a question of ‘how can we make this work?’ as opposed to risk-aversion or skepticism. It’s been the highlight of my career to serve alongside them.”

Between the Social Impact Fund, the expansion of its games business, Valorant’s impressive debut, and the sexual harassment suit, it’s been a roller coaster couple of years for Riot Games. The accusations the studio faces are undeniably heinous, but it’s heartening to see some good coming out of the company. A global studio like Riot is in a position to do a lot of good in the world, and it’s encouraging to see organizations like City Year and the youth it supports benefitting, especially during a pandemic.