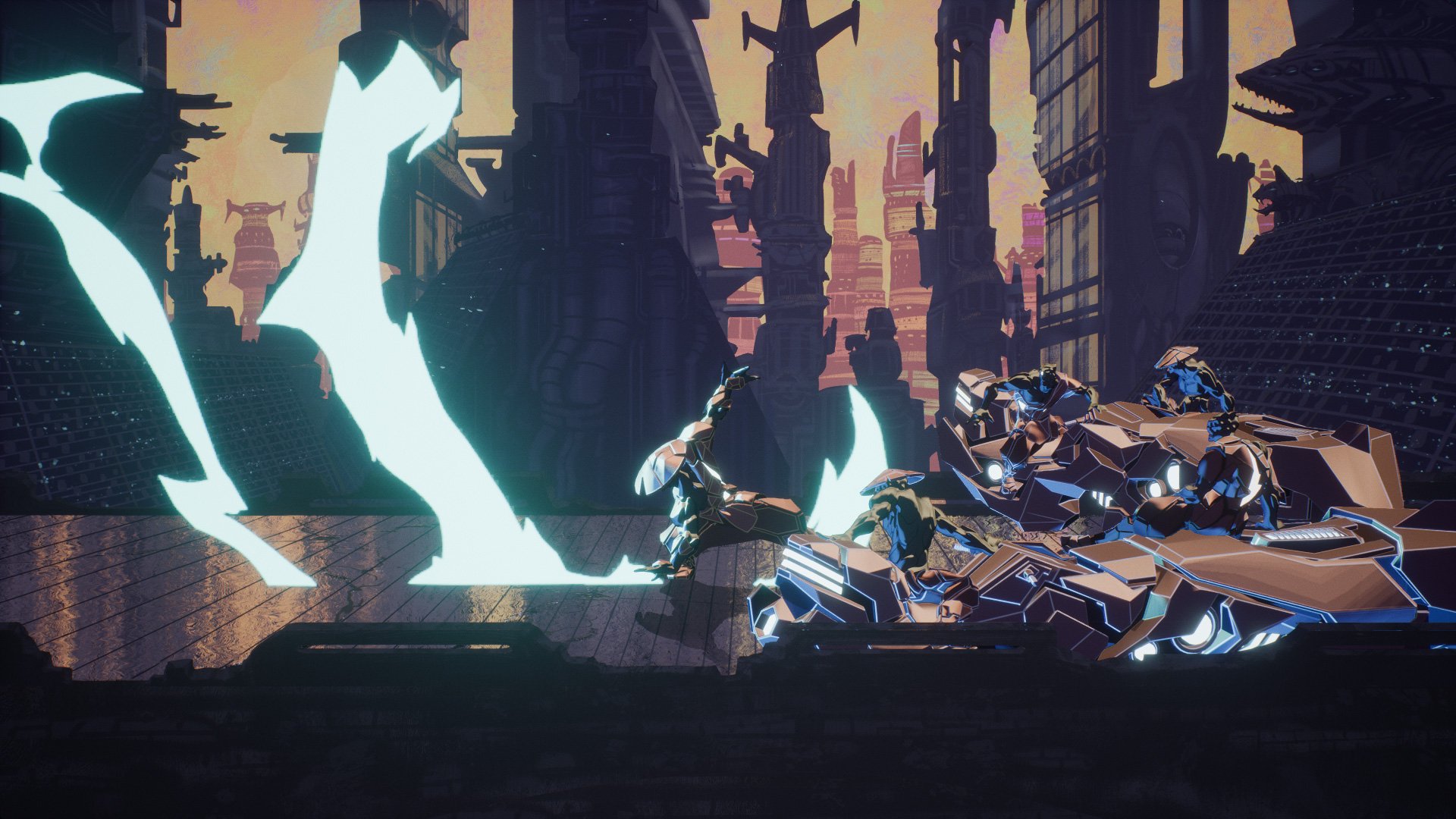 Yesterday, Sony held a State of Play event highlighting a host of upcoming PlayStation 4 and PlayStation 5 games. One of them, Aeon Must Die, is being developed by Limestone Games and published by Focus Home Interactive. During the showcase, a Tweet went viral alleging that in June Limestone saw a mass walkout in protest of crunch practices and a lack of payment. Additionally, the trailer for Aeon Must Die shown during the State of Play was reportedly outsourced and built with “abuse, manipulation, and theft.”

The tweet cites a trailer for the game posted to YouTube as the State of Play was occurring. In the video’s description is a link to a Dropbox, which contains a number of incriminating documents that describe oppressive working conditions, dubious behavior from Limestone’s CEO, and the outright theft of Aeon Must Die from the development team.

“In June of 2020, [Limestone Games employees] were forced to leave their former studio Limestone Games along with its founder/creative director,” a letter in the Dropbox reads. “Their reasons were unbearable work conditions with endless crunch, harassment, abuse, corruption, and manipulation.”

Other documents in the Dropbox allege that Focus Home Interactive was made aware of these conditions, but failed to address employees’ concerns in any meaningful way. In a tweet today, Focus made a public-facing statement:

“Focus Home Interactive was informed of serious allegations raised by some of the developers at Limestone who have worked on the creation of the video game Aeon Must Die,” the statement reads. “These grievances are directed at Limestone, their direct employer. As the publisher of this video game, Focus is carefully looking into these allegations and will draw the necessary conclusions if they are proved to be well-founded, and then take all appropriate measures.”

For some, including Mike Futter, GameDaily contributor, this statement is more about Focus covering its bases rather than addressing the issues at hand, and that the publisher only spoke publicly after its hand was forced.

“This reads like a lot of posterior covering,” Futter Tweeted.

It’s important to note that all of this is pure conjecture at this point, and all claims are unsubstantiated. If the claims wind up being true, the legal ramifications are many, but the anonymous nature of the accusations makes it hard to predict the future at this early stage.

“The allegations are all over the place,” Richard Hoeg, attorney at Hoeg Law in Michigan, told GameDaily. “There are some that seem quite significant (cash payments in lieu of taxable income; lack of contracts; stolen software, physical threats, etc.), and some that seem like a bad work environment, which don’t necessarily rise to the level of actual legal issues.”

Hoeg, whose legal expertise is limited to the U.S. (specifically Michigan), offered his analysis with the caveat that Limestone Games is based in Eastern Europe and he lacks the qualifications to definitively comment on the matter. When asked if there were any similar cases in the U.S. against which to draw a parallel, he suggested the mass walkout at Riot Games last year.

“Obviously, in that case, the walkout was in the form of a process designed around affecting a specific change,” Hoeg explained. “A creative team all leaving a developer due to non-payment is not something I can recall happening, but certainly you do have longer ‘brain drains’ when folks are unhappy over the course of, say, a year.”

With that important caveat in mind, Hoeg said that the potential legal fallout from the Limestone employees’ allegations can take many forms. Copyright law, labor regulations, and more all have the potential to come into play here. The most damning element, Hoeg said, is the accusations that salary was withheld.

“I can’t really equate employment standards, but I actually suspect that the biggest issue for the execs might be hiding those salary payments,” he explained. “Oftentimes the tax man is the one that makes the most trouble.”

Regarding the accusations surrounding IP theft, Hoeg said that for as much as criticism U.S. procedure receives, there are other countries in the world that simply do not bother.

“In particular, once you’ve established that you’ve been working in part for under-the-table cash, it becomes very difficult to prove that you haven’t been paid for the IP you created ostensibly for the benefit of the company,” he said.

Looking at the big picture, things are in an unknown state right now. All accusations are hearsay until proven in a court of law, but there’s another court that is likely to play a large role in coming months: the court of public opinion. How the public reacts to accusations surrounding Aeon Must Die could have a tangible impact on potential litigation.

Moving forward, it will be interesting to track the progress of this case. IP theft and allegations of crunch and salary withholdings are very serious. Hoeg isn’t confident that we’ll see much in the way of legal repercussions, but public perception is a powerful thing.

“My fear is that very little will happen on the legal side, but perhaps there will be more significant ramifications in the court of public opinion,” Hoeg said.