Epic Games mounts a legal offensive against Apple and Google 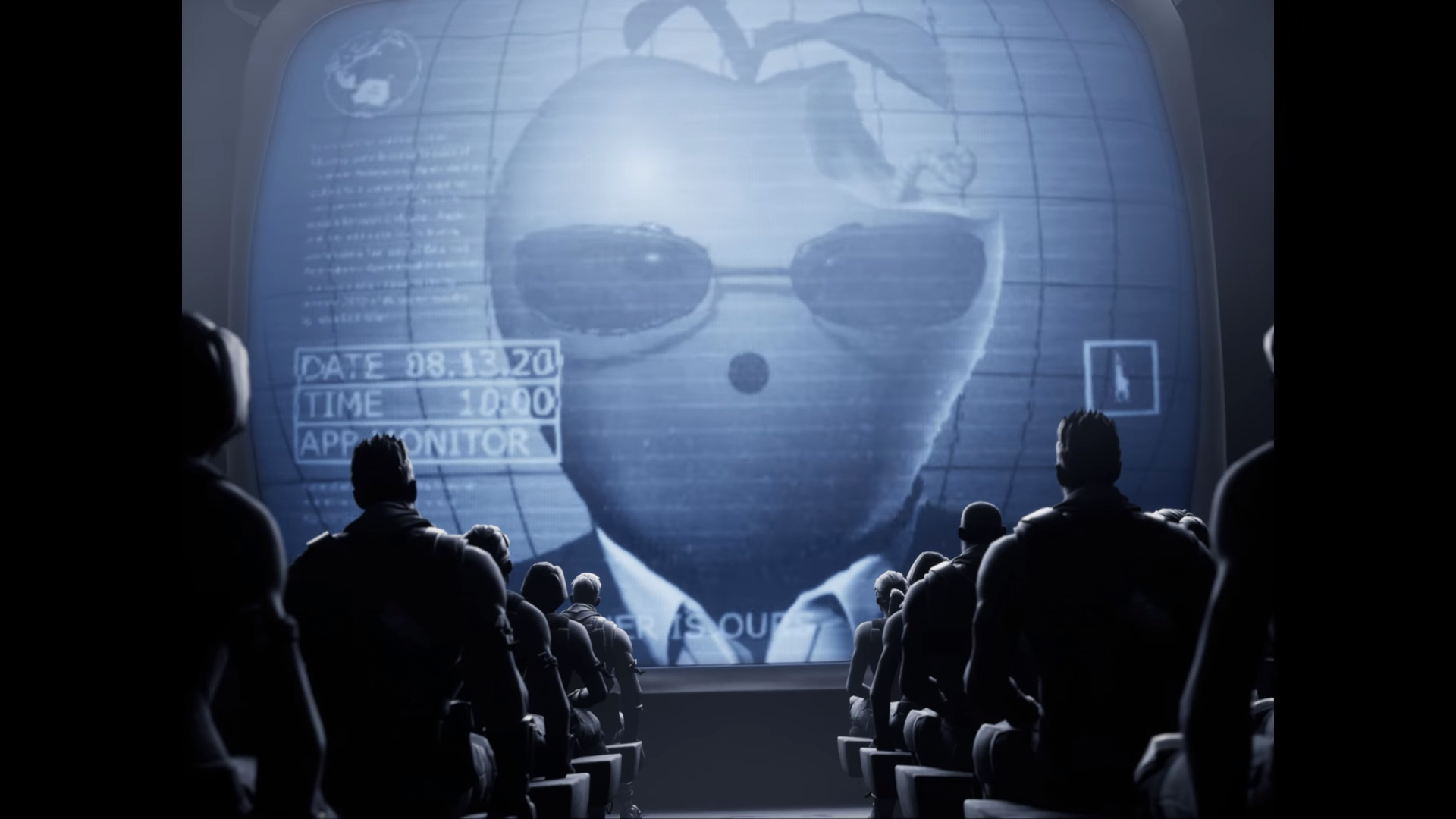 Last week, Epic Games launched a meticulously-calculated legal salvo against Apple and Google by way of a lawsuit against the two tech giants. The move appeared to be in response to the removal of pop culture juggernaut Fortnite from the App Store and Google Play Store after the game violated both stores’ terms and conditions. The filing of the suits was accompanied by a bizarre propaganda video that echoed a 1984 ad for Apple’s Macintosh computers.

From Epic’s point of view, the video and lawsuits are a protest against Apple’s historic “walled garden” approach to video game monetization. Currently it receives a substantial 30% cut of in-app purchases, which Epic undermined by offering discounted “V-bucks”--Fortnite’s in-game currency--with payments going directly to Epic rather than through Apple first. Epic implemented the same strategy on the Google Play Store as well.

Apple and Google responded by removing Fortnite from their respective storefronts, which triggered Epic’s suit and the distribution of the Nineteen Eighty-Fortnite video. The near-instantaneous nature of these actions--and the fact that Epic had the video ready to go--show that the company expected Fortnite’s removal from the mobile stores, pointing to a very deliberate chain of events.

“Epic has sued both Google and Apple for illegal monopolization and restraint of trade in their respective App Distribution Markets: Apple’s App Store and the Google Play Store,” Richard Hoeg, managing member of the Hoeg Law Firm in Michigan, told GameDaily. “These are antitrust claims made under the Sherman Act and related California law. The main issue raised is that Google and Apple charge too much for dpp distribution and in-app purchases--both 30%. They have tried to establish the app distribution and in-app purchases markets as separate.”

For many, Epic’s actions are a valiant rebuff of Apple’s historically-brusque monetization strategies that favor the company over developers. However, many others--including GamesIndistry’s Rebekah Valentine--find the video’s propaganda-esque nature disturbing, especially when you consider that kids aged 18-24 are Fortnite’s primary demographic.

“Epic Games is not a stupid company,” Valentine wrote. “It's aware that its audience of millions skews very young, and is augmented by numerous streamers and content creators who have even further reach and influence outside the Fortnite's walls. Epic knows well that its video plays to an audience that doesn't understand the nuance and complexity of the battle it's about to fight--and frankly, has no reason to.”

Valentine’s take is echoed by Hoeg; in his latest episode of Virtual Legality, Hoeg broke down the #FreeFortnite hashtag, and how it reflects back on the company behind the world’s biggest video game. In his conversation with GameDaily, Hoeg elaborated on his feelings of Epic’s weaponization of its player base.

“I find it abhorrent,” Hoeg said bluntly. “I’m all for reasonable minds discussing the rightness or wrongness of Epic’s case, but utilizing a game with a teen/pre-teen player base to propagandize should be something everyone looks down on.”

Hoeg, who has discussed the topic at great length, notes that drumming up anti-Apple sentiment among the Fortnite audience is not inherently illegal, nor is the “sprung trap” nature of Epic’s response, but it is certain to play a role in any legal disputes.

For David Cole, analyst at DFC Intelligence, #FreeFortnite and Epic’s challenge of Apple’s ubiquitousness is not necessarily a winnable battle, but the implications are more far-reaching than the public may think.

“Epic's quixotic challenge is a sign of a huge coming distribution war,” Cole told GameDaily “Controlling distribution is a way to get very rich, and lots of parties want a piece of the pie. Epic of course is definitely one of those up-and-coming parties. The problem I see is that Epic has two roles it is aiming for: that of a publisher bitching about the fees charged by distributors, and a distributor looking to charge fees. Epic may be looking to charge lower fees, but I still see that as a potential issue.”

For Hoeg, it’s nearly impossible to speculate on the future of this case. The nature of the Sherman Antitrust Act is notoriously vague and broad, which means that Epic’s success against Apple and Google hinges on the Justice Department's interpretation of the law. Still, like Cole and Harding-Rolls, Hoeg doesn’t see the case going in favor of Epic Games.

“It depends primarily on establishing that Apple and Google are the monopolist providers of access to their own services,” He explained. “This is, of course, true, but almost tautologically so. GameDaily is the monopoly provider of space on GameDaily--if someone doesn’t like your advertising rates, they don’t have the right to sue you as a monopolist. Epic cannot make the case that Apple or Google is the monopoly provider of phones, software, mobile operating systems, games, or otherwise. So they have to define the market down in a way that the court is unlikely to simply smile and nod at.”

Piers Harding-Rolls, analyst at Ampere Analysis, said that Epic’s stated intent of passing savings along to the consumer is nice on paper, but Fortnite players need to see a tangible impact if they’re going to remain on Epic’s side.

“Yes, Epic has made a point about passing on savings from cheaper payment processing fees to end users, but if this was more generally implemented I doubt consumers would notice the difference in in-app purchase costs across different games,” Harding-Rolls told GameDaily. “It would make a difference to the industry of course, but why show a pastiche #FreeFortnite video to kids while they are playing the game if this is a B2B issue?”

One important element of the case is that simply having a monopoly is not illegal, but using that monopoly to hurt consumers and engage in anti-competitive behavior is. It falls to Epic to prove that Apple and Google are unfairly tipping the competitive balance in their favor. Hoeg said that this is an uphill battle for Epic, which explains the company quickly pushing out the Nineteen Eighty-Fortnite video so quickly. After all, consumer sentiment can be a powerful thing, and the court of public opinion can play a significant role in cases like this.

To that end, Epic has painted itself as an underdog crusader, a champion for the little guys, but Hoeg points out that such a reputation belies the company’s grander goal: to dismantle an entire business model (Apple’s “walled garden” approach) in order to maximize profits.

“Many folks will back Epic, seeing Apple and Google as tech giants that need to be brought down a peg,” he explained. “Lord knows I think their terms of service should be highlighted and complained about on a regular basis. I don’t blame anyone for the impulse. That said, a party generally has the right to set the parameters for partaking in its product, and that includes things like how phones operate, and how video game consoles operate as well. Epic’s theory of the case is an attack on the ‘walled garden’ business model entirely. It feels that a party that creates a market has no right to control it after its creation.”

Moving forward, keeping track of this case is going to involve at least cursory knowledge of antitrust law. Clearly, the legal foundation upon which Epic’s case is built is flimsy at best. Already, Apple has retaliated by moving to terminate Epic’s access to all iOS and Mac development tools.

However, as Hoeg noted, Epic’s point may not be to win. Rather, this is possibly a long-term play meant to cast scrutiny on Apple and Google’s business models. If public opinion on the walled garden turns negative, then Epic will have won regardless of the outcome of the suit.

Of course, this approach comes with a whole host of ethical and moral implications. Weaponizing an audience is one thing (and has worked in the past), but Fortnite’s player base is young, and many kids may be ready to jump to Epic’s defense without fully understanding the facts. The ethics of the walled garden business model are certainly questionable, but is this the way to tear those walls down? Both sides of this conflict are morally dubious, but such is the nature of public spats between corporations.