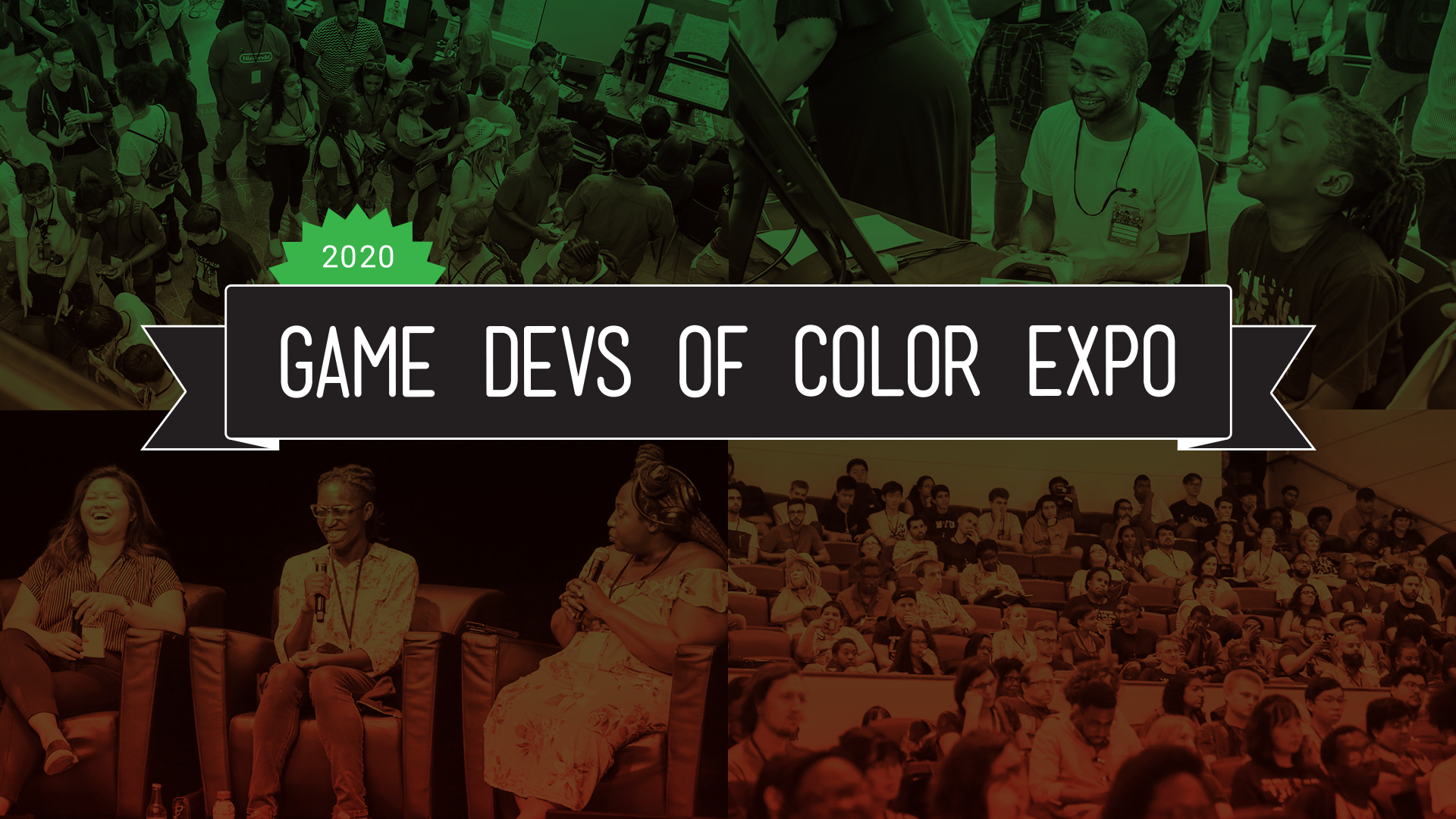 This weekend, the fifth annual Game Devs of Color Expo will take place entirely online. Established in 2016, it’s a show that shines a spotlight on industry professionals from historically-marginalized groups--namely Black and brown developers, which is a demographic that has not been afforded the same opportunities as the white groups that dominate the business.

“We built the Game Devs of Color Expo to reflect something that is massively missing in the games space: Black and brown creators being in the spotlight, and not in the margins of some overcrowded arena,” event organizer Shawn Alexander Allen told GameDaily. “We know the statistics--specifically that 1 to 2% of the industry is Black, which is hilariously bad.”

While these stats only reflect answers from attendees of the Game Developers Conference who took the time to complete the organization’s annual survey, there are other reports that corroborate such low figures, including International Game Developers Association’s annual Developer Satisfaction Survey. Last year’s edition noted that less than 2% of all developers identified as Black.

Allen said that stats like this, coupled with personal experience, has kept him from returning to GDC in recent years.

“I have been that one Black person in a sea of hundreds of white people,” he said. "It feels really alienating.”

To that end, industry professionals Catt Small and Chris Algoo organized the original Game Devs of Color Expo in 2016 as a place where Black developers can make their presence in the business known. Allen joined the team a year later, and has been on the organization team ever since.

Bias and inequality are baked into the games industry at a fundamental level, and while events like the Game Devs of Color Expo are important methods of highlighting these problems, the only thing that can truly eliminate them is profound structural change.

“This is a huge problem that needs real solutions, like budgets paid toward consultants who will come in and break down your whole company structure to figure this out,” Allen said. “We can’t very well diversify teams if the same veteran developers are kept in the same key seats for decades, and that’s what the industry has been doing. I’ve yet to see a big AAA company say here’s a Black woman who is a lead on this game. The only Black women I see leading teams have had to go and build the team themselves, and even still face the task of trying to convince people they deserve funding.”

For developers attending the Game Devs of Color Expo, it’s not just a chance to break down racial barriers in the industry, but to normalize a diverse landscape free from a homogenized point of view.

“Exhibiting at Game Devs of Color Expo 2019 felt like stepping into Wakanda,” Xalavier Nelson Jr., developer at Strange Scaffold told GameDaily. “It was only after a few hours that I realized how atypical it was to be surrounded by people who looked like me, creating material based on our shared experiences and passion for games. It shouldn't be odd to feel comfortable in your skin, but I think that accepting that dissonance has become a tentpole of the Black experience. When I'm participating at Game Devs of Color Expo, that dissonance fades away, and I can just be who I am: a driven, talented creator of color.”

The lens through which Nelson views the world is that of a Black man living in America, a viewpoint that comes with a host of unfortunate implications.

“This allows me to bring unique, wonderful things to life, but also means I've spent late nights attempting to resolve how the production processes of my games will be affected if I am murdered by the police,” Nelson said.

It’s an experience that has driven him to become a better developer, and one that is reflected in his work: a game called An Airport for Aliens Currently Run by Dogs.

“In the game, I'm imagining a better world with my team, one where stock photo dogs operate society in a way that is more empathetic than our fellow human beings,” he explained. “A world where the last two people in the universe--both of them people of color--can live a life that is wild, weird, and safe, whether they're on Phobos or Doggdrasil.”

Beyond being organizers of the Game Devs of Color Expo, Allen and Catt Small are also developers. Last year, after several years of work, Small launched SweetXHeart on itch.io, and Allen launched Treachery in Beatdown Cityon Switch and Steam earlier this year.

As part of the Game Devs of Color Expo, indie publisher No More Robots has announced a $75,000 initiative that will see five development teams receiving $15,000 in funding for their projects. Recipients will be chosen by the event’s organizers, and will also have the option to receive mentoring from experienced developers and publishers.

“The No More Robots team are passionate about supporting marginalized game devs wanting to succeed in the game industry, and we've been looking for partners for programs for some time now,” Simon Carless, an advisor at No More Robots, told GameDaily of the initiative. “The organizers of the Game Devs of Color Expo have been doing an amazing job, and already have a lot of worthy supporters from other game companies on board for their virtual event. So we talked to them about what they were looking for in a grant program and came up with this.”

Carless said that the grant program is an effort to subvert the notoriously daunting prospect of getting dev studios off the ground, a doubly challenging task for developers of color.

“If you're a coder, for example, maybe you need to pay collaborators so they can survive and thrive during the development of whatever you're working on,” Carless explained. “And this problem goes double for marginalized devs. So straight-out grants without any ties or restrictions are a really amazing way to send devs on their way to success.”

There are those who might say that they’ve noticed progress in terms of diversity in the development industry, but, for Allen, the sheer amount of work that needs to be done renders any such progress insignificant. To emphasize this point, he pointed to a quote from activist Malcom X:

“If you stick a knife in my back nine inches and pull it out six inches, there’s no progress. If you pull it all the way out that’s not progress. Progress is healing the wound that the blow made. And they haven’t even pulled the knife out, much less heal the wound. They won’t even admit the knife is there.”

“While some companies have admitted the knife is there, they still seem bewildered of how to heal the wound,” Allen said. “The amount of work that needs to be done is huge, and I think it can’t really happen in the current structure of things. The Game Devs of Color Expo is one of the organizations, along with folks at GLITCH, and other groups who are aiming to use what leverage we have to change things from the outside, not just from the inside.”

This sentiment is echoed by Nelson, who said that a diverse industry requires diverse leadership on an executive level.

“Conversations about representation are always going to be stifled on a fundamental level if our creative directors, funding entities, and key executives do not have the background and context to inherently champion these initiatives on a long-term basis,” he said.

This is the message both Allen and Nelson hope the wider games industry gets out of the Game Devs of Color Expo; that change needs to be both an internal and external force. Allies need to vocally advocate for diversity and inclusion, but industry leadership also needs to recognize the inherent exclusion that it continues to perpetuate.

That goal is made a bit harder by the online setting, though. Allen said that the Game Devs of Color Expo is an event that thrives on in-person interaction, and he is distraught that this isn’t possible in 2020. In past years, attendees lauded the sense of unity that comes with a show like this one, especially as it normally takes place in the Schomburg Center for Research in Black Culture in Harlem, New York City.

While this year’s event certainly loses some of its symbolism due to being virtual, Allen is hopeful that attendees can still experience an impactful show.

“I hope attendees can get at least a piece of the magic that comes with our yearly in-person event,” he said. “Our goal every year is to provide a much needed alternative to the industry events we all know: we invite speakers to give their first talks dropping truth bombs you won’t hear anywhere else, and work to show off amazing games that people don’t even know about yet. I hope attendees walk away with some new developers to follow, some new games to get hyped for, and feeling a bit better about the state of the industry.”

To get a feel for what the Game Devs of Color Expo has to offer, you can visit the show’s archives and watch some of previous years’ talks.

In a year that has seen the re-emergence of the Black Lives Matter movement into the global spotlight, a show like the Game Devs of Color Expo is more important than ever before. The unequal opportunities for Black professionals that characterize the games business reflect the status quo of other industries and the wider social landscape.

The road ahead is long, but hopefully efforts like the Game Devs of Color Expo help us to see the knife and, eventually, remove it.