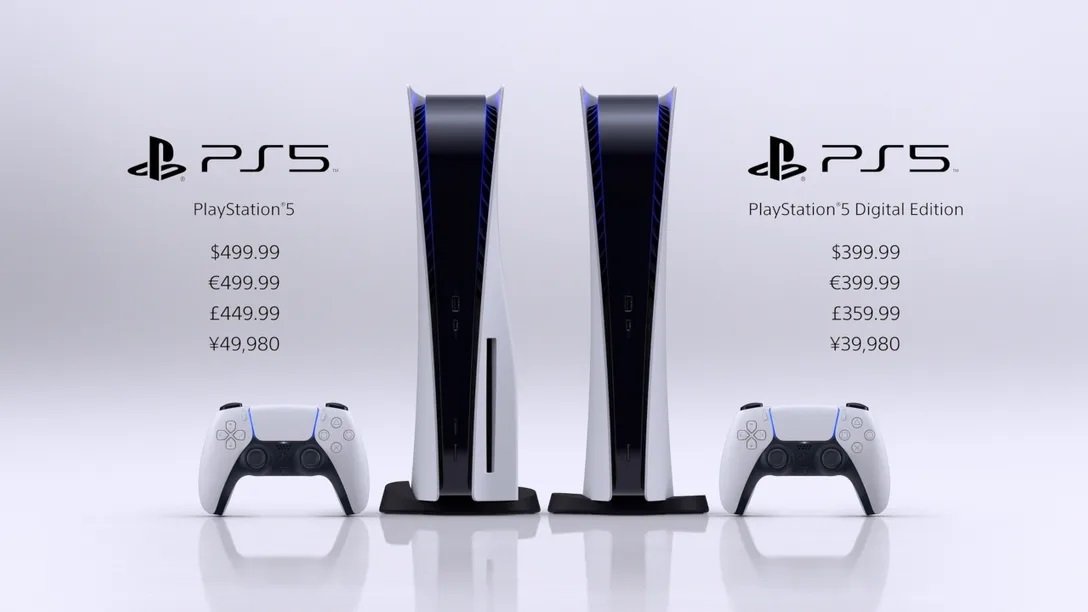 Today, Sony finally unveiled the oft-requested price and release date of the upcoming PlayStation 5 console, and the number is in-line with what many analysts have been predicting. The official retail price of the standard unit will be $499, with a disc drive-less version clocking in at $100 cheaper. Both consoles will launch on November 12 in the US, Canada, Japan, Mexico, South Korea, Australia, and New Zealand, and November 19 everywhere else.

As a result, consumers have some interesting choices to make as they weigh the perceived value of what “next-gen” means to them. Further, as a manufacturer, Sony likely had more flexibility in terms of pricing the all-digital console, putting it in a strong position following the announcement of the Series X and Series S prices.

“The pricing is as expected. The digital version is well positioned at $399, being only $100 more than Xbox Series S, but the same power as the disc-based version of PS5,” Piers Harding-Rolls, analyst at Ampere Analysis, told GameDaily. “A digital version clearly gives Sony an opportunity to generate more direct revenue through its storefront, and can therefore be more competitively priced.”

Another front on which Sony is directly challenging Microsoft is in subscription services. During the showcase event, Sony announced the PlayStation Plus Collection, an addon to PlayStation Plus that allows users to download and play a curated lineup of current-gen games, such as Bloodborne, Fallout 4, God of War, Persona 5, and more. For Harding-Rolls, this is a play at building up an Xbox Game Pass-esque usership.

“PlayStation Plus Collection is an instant collection of 18 PS4 games for PS Plus subscribers that own a PS5,” he explained. “It is positioned to tempt new users into the PlayStation ecosystem. It also adds some competitive weight against Xbox Game Pass.”

Where Sony appears to have lost a lot of positive sentiment, though, is with a perceived lack of concrete information. The presentation itself had no definitive launch dates for most of the games, leaving many to wonder exactly what they’ll be playing on day one. This information has since been added to Sony’s announcement blog post, but bits of info were also tweeted out by industry personality Geoff Keighley

Another tidbit lacking from the showcase was any dates of locations for pre-order availability. Instead, the information was also tweeted out by Keighley, which has led to some confusion on social media about Sony’s methods.

Adding to the confusion is the discussion surrounding the term “console exclusivity.” Some of the games shown in the showcase--including some first-party titles--are headed to PC as well, but this detail was relegated to minor bullet points, easily missable during the presentation. In the case of the Demon’s Souls remake, the info was a flat-out mistake.

Elsewhere, another important bit of information is the fact that Sony will be charging upwards of $69.99 and €79.99 for some of its first-party games, all but cementing a next-gen software price hike. Such an increase was teased by 2K Games in July with the announcement of NBA 2K21.

80 Euros for a game is certainly a hefty number, but there hasn’t been much backlash on social media, at least not from NPD analyst Mat Piscatella. If anything, such a rise should have taken place this generation, he said in July, because of the technological and human demands of the game development business. Today, a price hike represents not only more potential profit for (hopefully) the people who make the games, but it also means players could see more flexibility in price/content ratios, according to Piscatella.

“Sometimes pricing should elevate for no other reason than people would be willing to pay a higher amount for a product, particularly at launch for titles perceived as premium,” he tweeted. “There should be more options and fluidity at both the bottom and top of the pricing scale.”

While a lot of questions remain in the lead-up to the launch of next-gen consoles, it’s nice to finally have definitive release date and pricing information. Between COVID-19, the emphasis on subscriptions, and an increase in digital media, this transition is likely to be an eventful one. If nothing else, it’s certainly an exciting time to be a game consumer.