Behind the making of gaming's virtual influencers 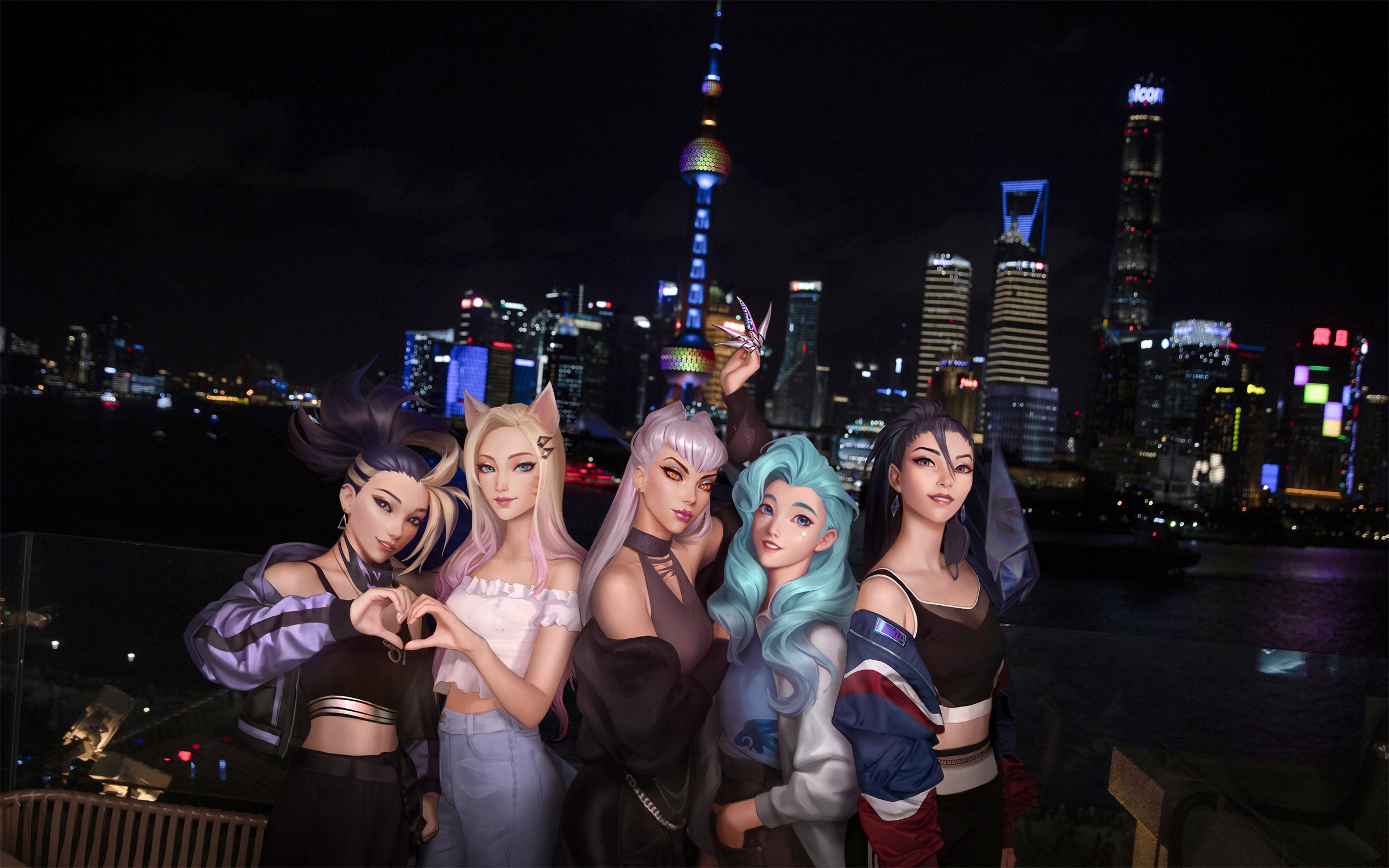 Twenty-year-old Knox Frost has snagged one of the most high-profile jobs in his career: the face of The World Health Organization (WHO)’s fundraising campaign against COVID-19.

“I’ve partnered with @WHO to combat corona. Let’s show them younger generations are in this fight,” he announced on Instagram to his legion of followers.

But what makes this so eye-catching for WHO, aside from enlisting a young face to stem the spread of this pandemic, was that Frost is more bits and bytes rather than flesh and blood: he’s a computer-generated influencer.

Tapping on virtual influencers as a marketing strategy is still an anomaly in most industries. Yet, they’re gradually becoming a mainstay in fashion—as well as seeing an unexpected presence in videogames. One of the most prominent examples of gaming’s virtual influencers is K/DA from the sprawling metaverse of League of Legends: a fictional pop band whose music is heavily influenced by the slick club-bangers of Kpop tunes. While technically an inventive way to sell new League of Legends skins — the members of K/DA are playable characters within the game itself—these virtual influencers are also the studio’s means to branch out towards delivering full-fledged musical experiences in the near future.

“We thought, what could music look like as a creative experience that stood on its own? So in 2018, various Riot teams came together to think about the ways in which we could bring a music experience to life outside of the game—which inevitably became the foundation of the pitch behind K/DA,” Patrick Morales, the Creative Lead for K/DA and Seraphine in Riot Games, said.

Akin to the virtual influencers in fashion circles like Knox Frost and the infamous Lil Miquela, the members of K/DA also come with elaborate backstories, complete with social accounts that see enthusiastic responses from fevered fans. For instance, Akali is a kunai-wielding assassin in-game and the group’s lead rapper, known as much for spitting rapid-fire rhymes as her impeccable fashion sense. And it’s the latter that also drew fashion labels into collaborating with the virtual group, from streetwear apparel like AAPE to high fashion brands like Louis Vuitton.

These events may represent a gradual shift towards virtual influencer marketing, which can catapult games towards a wider audience. Riot Games’ Morales shared that he has seen music fans introduced and hooked onto League of Legends just from listening to K/DA’s music. That said, it’s also a bandwagon that even indie studios can latch onto as well, even if they don’t have an expansive budget like that of Riot Games and other triple-A studios. Take, for instance, the popularity of the Frog Detective on Twitter, the eponymous hero of his very own adventure game by developers Grace Bruxner and Thomas Bowker, with the account garnering a modest but ardent following of at least 8,000 followers.

Unlike the virtual influencers of Riot Games, Frog Detective isn’t a meticulously rendered humanoid frog with life-like features but a blocky, albeit very handsome, frog lad with an oblong head. This sprightly amphibian is on his way to becoming a bonafide influencer, his non sequitur tweets usually attracting at least a few fervent responses from his human admirers.

“A great virtual influencer is entertaining, funny and offers something that attracts a different or wider set of audience to a brand,” Selena Sheikh, the Practice Director of Technology for Hill+Knowlton Strategies, a global public relations consulting firm, said. “The premise of this whole thing is that the virtual influencer is a character, [rather than] a person. It's a character as part of the brand, so it attracts you to the brand and [in turn] makes the brand more attractive.”

What’s curious was that the Frog Detective persona wasn’t an intentional decision to create a brand around their game, according to Bruxner; it mostly just tickled her to “just write nonsense.”

“I think I was concerned that someone would take the handle on Twitter. I just checked Instagram and somebody has already taken the handle, so I guess I had some basis for that,” she said. “Frog Detective as a character is mostly a friendly blank slate, so I could really just tweet whatever I wanted.“

While unorthodox, this approach towards curating the Frog Detective personality brings some authenticity towards the studly investigator’s deeply personable persona.

Bruxner tries not to set too many boundaries around the Detective’s tweets, but there are still some parameters that she’s particular about not breaching.

“I try not to be too much like someone trying to sell a product. The account wasn't for that when I made it; it was just for making jokes,” Bruxner said. “I don't want to tweet 'tag a friend who should play Frog Detective!' or anything like that. I won't tweet unless I actually want to and think it's funny. Otherwise, it's pretty free reign. I try not to be explicit or swear, and I don't say anything that can be used as in-universe canon like ‘I just learned that MysteryMonkey49 died. RIP :/’... Though that would be funny.”

It was this tightrope of affability that Riot Games have tried to straddle but inevitably tripped over with their newest virtual influencers: a talented musician named Seraphine who’s attempting to break into the music industry. The virtual popstar first emerged on Twitter in mid-2020 to “share music and hopefully connect with people” and was soon tweeting ridiculously dazzling selfies while bemoaning about waking up in early mornings for practice. Yet Seraphine has also been criticized for discussing her issues with anxiety online, a stunt that’s seen by many as a thoughtless attempt to hijack current conversations around mental health.

“So far, what I've seen with Seraphine was [that the team was] trying to make her a human being—[but] no, she’s not human. They have to remember that these are characters rather than actual people,” Sheikh explains. “The people behind the characters are actually artists [and] game developers—[Seraphine is made up of] many people who make that one character. [While] she can have certain attributes of these people, she doesn't and can’t embody them.”

Riot Games is keen to move on from this blunder, with Morales having previously shared with Polygon that “we’re conscientious about how she engages her followers, as well as topics that may potentially hurt or mislead people.”

Instead, Morales hopes that through their virtual influencers, they can craft future stories that are more aligned with League of Legends players’ expectations and experiences.

“K/DA, in its current form, was created because we believed it was the best way to engage our players and fans in an authentic and resonant way,” Morales said. “Using social media, creating a storyline, giving them personalities that were so close to what people experienced them in the game itself, creating more music—it was all in the service of the players and created because they desire this type of content, not because we wanted to specifically create virtual influencers and characters for the purpose of promoting our game.”

The origins of Seraphine, for instance, mirrored the trajectory of scrappy young musical talents in real life, which eventually achieved mainstream success. Likewise, Seraphine was featured in one of K/DA’s newest single, “More”—a move that saw the plucky young singer touring with and even making an appearance on real-life magazine covers alongside the band.

“We were intrigued by the idea of creating a foil to K/DA's established celebrity with the story of someone whose star had yet to rise,” adds Morales. Doing so created a maneuver that adds hues to League of Legends’ kaleidoscopic world while bringing new and existing players closer to the games’ champions.

For studios considering how they can craft and leverage their own virtual influencers, Sheikh wanted to point out that goal-setting is of paramount importance as with any marketing strategy. It’s a crucial yardstick towards defining and measuring your own success.

“Why are you building the character? Is it because you're eventually building [a new] game? Are you attracting people to the game? Are you building a brand?” she said. “You have to identify your purpose—if you don't have a purpose, then why do you have a character? You have to have a clearly defined idea of what this character is supposed to do for you, or [how] this character is supposed to speak for you in a certain context.”

To this end, Riot Games have defined their measure of success with their virtual influencers as the amount of out-of-game impact they garner. “K/DA represents our desire to evolve League into something that can be enjoyed by and break out into the mainstream public, not just in gaming. We’re unique in that our creative ecosystem extends to a number of places - digital, interactive, experiential, and so on,” explains Morales.

“Out-of-game impact is something we've always hoped for and somewhat expected, but never to this extent. What first started as a celebration of our players, also soon became an unexpected spokesperson for the game to an audience that went outside of our own. We’ve heard countless stories of music fans who got into League of Legends because of K/DA, as well as those of League players who got to discover an entire new genre of music from the unique take that we were giving it.”

As for the Frog Detective, Bruxner is content with taking a more laissez-faire approach rather than crunching hard numbers and transmuting them into concrete results for the sake of her game. “I've never tried to influence anyone to do or buy anything through that account, though. Frog Detective loves doing cameos in other games, so yes to that!” she said.

That said, she would rather avoid overt product promotion through collaborations with big brands—the bread and butter of today’s most prominent virtual influencers. “I don't love the idea of just selling products to people without knowing anything about it, plus it muddies the integrity of the character a bit. Me as Grace doing that feels less weird than me as Frog Detective. I would let the Detective do a luxury brand photoshoot, though.”

Described as Jeopardy for gamers, Mysterious Monsters puts a fresh spin on a classic format, and the show's producers hope it can help spark a new trend in media.