Three Montréal studios team up for Next Lev'elles, an event about amplifying women in games 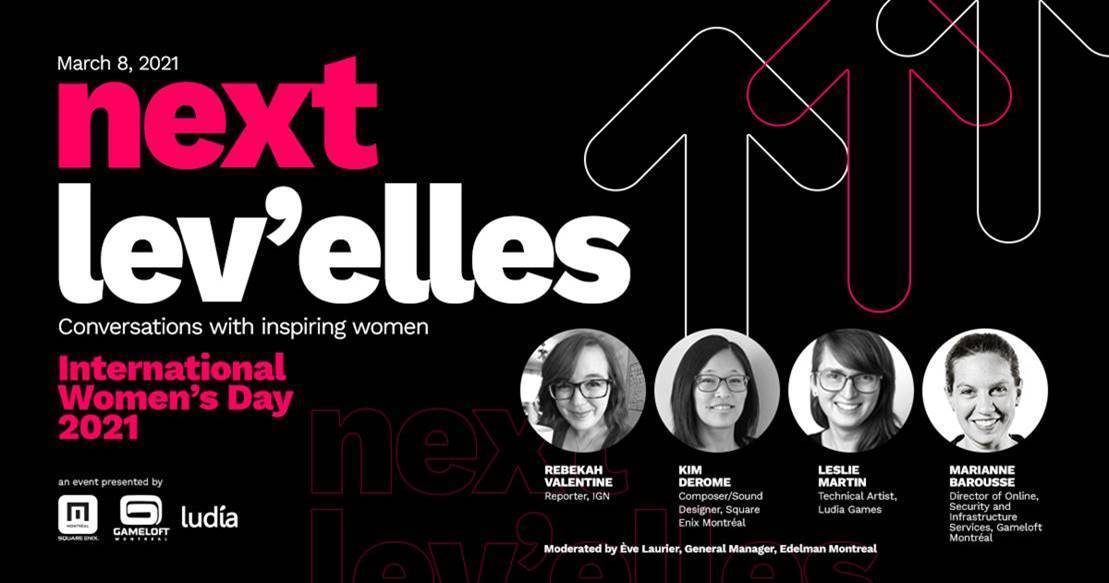 March is Women's History Month, an ideal time to amplify the voices of women professionals across all industries, including the video game business. To that end, next Monday--which is also International Women’s Day--three studios will come together for Next Lev’elles, a conversation with a handful of women leaders in the games industry.

The goal of Next Lev’elles is to encourage more women to join the ever-growing games industry, a business that is heavily skewed toward men; in the most recent Developer Satisfaction Survey from the IGDA, only 24% of respondents identified as female.

GameDaily reached out to event organizers to get some background on Next Lev’elles, and representatives from all three studios answered jointly. These are Nedjma Belbahri from Square Enix Montréal, Junel Popp from Ludia, and Genevieve Sorel from Gameloft Montréal. Together, the three hope that they can shine a light on the challenges faced by women in the games industry.

“Although women make up almost half of mobile game players, they make up only only one-fifth of industry professionals,” they told GameDaily. “We wanted to do our part to give inspiring women a voice to inspire more women to study and work in the video game industry. We hope to inspire more women to join an industry that will benefit from increased diversity and representation.”

It’s important to foster an interest in the games industry early, the team noted, which is why every year these three studios send dozens of women to liaison at high schools. While significant progress has been made in recent years in terms of female representation, there’s still a great deal of work to be done, and engaging the younger generation will be key in the long-term.

“We believe that we must encourage young girls’ interest in STEM as early as primary school,” they said. “If we wait until higher education to interest them in professional careers in video games, odds are that it will be too late.”

To appeal to as broad an audience as possible, the choice of Next Lev’elles panelists was quite deliberate. Derome, Martin, and Barousse represent a wide range of games industry jobs, and the hope is that this will highlight the varied nature of work available in the business.

“A recurring problem is that women with creative minds do not feel that technology is a field in which they can flourish,” Belbahri, Popp, and Sorel explained. “It is important to connect fun and creativity with technology. This is why we chose atypical profiles to come to speak to inspire women who may have a different background, or who may feel like they don’t have the right skills to see that yes, they have a place in the industry.”

The three are aware that it will take more than a single event for the entire industry to reinvent the way it approaches equality, but they hope Next Lev’elles can at least encourage some self-examination. If a reckoning is to be had, it’s necessary for the industry to take an objective step back and acknowledge its failings.

“Our industry needs to be proactive in the short and long term. First, we need to break the vicious circle of underrepresentation. If women do not see themselves represented in a sector, any sector, they are less likely to want to join. Second, we need to challenge perceptions that women aren’t succeeding in tech, and encourage more young women into fields such as game programming and computer sciences. If more primary and secondary schools offer tech-related programs, then we will see positive change in the long-run.”

Beyond offering insights from a panel of industry professionals, Next Lev’elles is also encouraging donations to La Rue des Femmes, a Montréal-based non-profit working to address homeless among women.

“In our industry, we also strive for ways to give back to the community, which is why we decided to support La Rue des femmes by raising donations for the cause before, during, and after the event,” they said.

One of the core themes of Next Lev’elles is unity. Belbahri, Popp, and Sorel stressed that, despite working for competing game studios, the issue of gender equality affects everybody.

“Since our studios face common challenges (recognition and demystification of the mobile sector, recruitment), and have common values of inclusion and diversity, our studios decided to join forces once again for International Women’s Day,” they said.

This isn’t the first time the three studios have teamed up though. Last November, they jointly participated in a MegaMigs Montréal talk about the state of the region’s mobile game scene.

“We hope to inspire by proving that we can be actors of change in the community when we collaborate,” the team said. “When it comes to making the world a better place, there is no place for competition!”