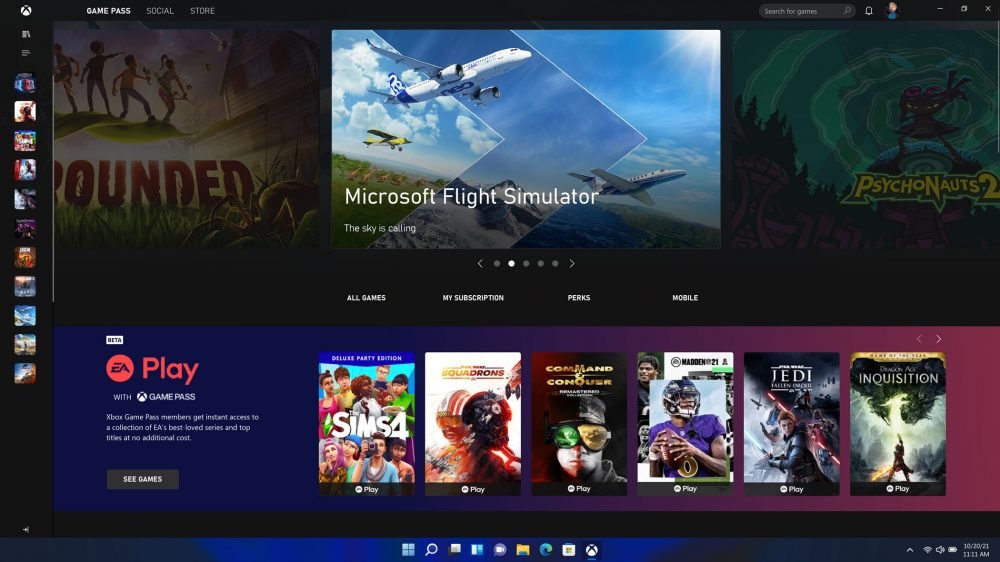 At an event today, Microsoft announced Windows 11, the next version of its perennial operating system. With the update comes a number of new features, including a total UI redesign aimed at simplifying the experience, multitasking features, direct Microsoft Teams integration, and, for the first time, the ability to run Android apps thanks to cooperation with Amazon and Intel.

Windows 11 also boasts deeper integration with the Xbox ecosystem. During the presentation, Xbox corporate vice president Sarah Bond touched on some of the more gaming-focused features included in the new OS, such as Auto HDR for many DirectX 11 and 12 games. Further, Windows 11 comes with a redesigned Xbox app where users can access and organize their gaming library.

In a blog post from today, Bond touched on other gaming features included in Windows 11, such as DirectStorage.

“With DirectStorage, which will only be available with Windows 11, games can quickly load assets to the graphics card without bogging down the CPU,” Bond wrote. “This means you’ll get to experience incredibly detailed game worlds rendered at lightning speeds, without long load times.”

On paper, this makes it sound like Microsoft is attempting to recreate the quick load times of the Xbox Series X|S consoles for PC platforms. Of course, this is hardware-dependent, so users will need the proper componentes--like NVME SSDs and the proper monitors--to take advantage of DirectStorage and Auto HDR, but gaming was clearly a focus for the Windows 11 dev team.

Bolstering the gaming aspect of Windows 11 is a more direct integration of Xbox Game Pass via the built-in Xbox app. Bond’s post also touched on Xbox Game Pass for PC, which gives subscribers access to cloud streaming. This way, PC users can stream Game Pass games via a web browser, eliminating the need for high-end hardware.

“With Xbox Game Pass Ultimate, you can also experience Xbox Cloud Gaming on Windows PCs via a browser, so even an entry-level device can play the biggest Xbox console titles,” Bond wrote. “And as we recently announced, we’ll add cloud gaming directly into the Xbox app on PC.”

“Games have become of key importance to Microsoft, and I expect by pushing a subscription to Game Pass it can get many people onboard without them realizing it,” Cole told GameDaily. “I look at it as similar to their OneDrive storage system which creeped into our Microsoft Office subscriptions. The thing is that while it may irritate some it can also work. Basically that is what I think the plan for Game Pass will be.”

When asked how Microsoft approached the gaming aspects of Windows 11, a spokesperson provided the following statement:

“We believe putting the player at the center is key to success for the Xbox ecosystem: Your relationship with your games is what’s important as you play on the device you prefer across console, PC and mobile. PC gaming is a core part of that ecosystem, and we built Windows 11 to provide a high-quality, customizable gaming experience for people who choose to play games--either those from our Xbox Game Studios, or from our partners around the world--there.”

While there is no firm launch date just yet, Microsoft did state that Windows 11 will be available to Windows 10 users as a free update this holiday.