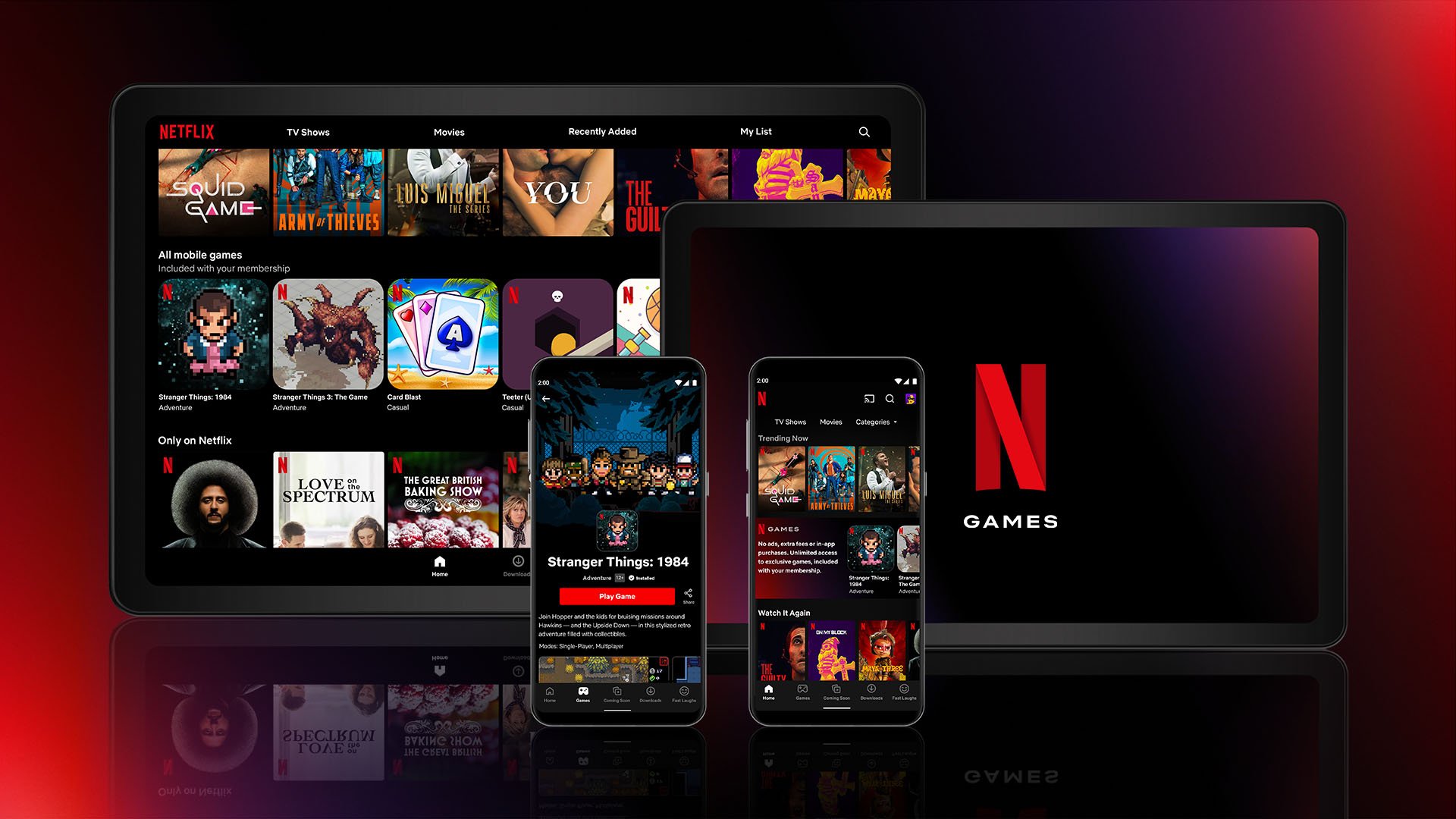 Earlier this year, juggernaut streaming service Netflix announced its intent to break into the video games space, and hired former EA and Facebook executive Mike Verdu to lead the effort. This week, the first results of this effort--dubbed Netflix Games--appeared inside the Netflix app on Android mobile devices (iOS is coming soon) in the form of five playable titles: Stranger Things: 1984, Stranger Things 3: The Game, Shooting Hoops, Card Blast, and Teeter Up. As of now, these games are available to all Netflix subscribers for no extra charge, but users need an Android device to access them for now.

There are a number of implications that come with Netflix’s foray into the games market, the subject of which is the topic of a new report from Ampere Analysis. Within, Ampere discusses the rollout strategy Netflix is likely to employ over the short- and medium-term. For instance, if the games segment becomes popular enough, and the company sees enough revenue potential, Netflix is likely to offer a premium subscription that includes its video game catalogue. For now, though, it is merely testing the waters.

“It’s a case of experimentation for the foreseeable future,” Piers Harding-Rolls, research director of games at Ampere Analysis, told GameDaily. “That’s why the first batch of mobile games are a collection of different experiences. Netflix will be capturing data on what works and unpacking why and building on that.”

In the short-term, Harding-Rolls expects subscription prices to remain where they are currently, even though Netflix is likely investing a sizable chunk of money into its games venture. Should the company see enough demand for the new content, however, we’ll likely see the introduction of a new premium subscription tier. This tier won’t be limited to just games, though, Harding-Rolls said; rather, games will become an added value on top of the film and television content.

“This is about differentiating the subscription video-on-demand offerings as much as new user acquisition through games,” he explained. “In the future, Netflix might reconsider the current strategy of no in-game monetisation. Without that I think it is leaving a lot of commercial potential on the table.”

Regarding its publishing and development partners, Harding-Rolls said that Netflix is already well-versed in terms of content acquisition. And given the size and popularity of the platform, finding partners to build out its catalog of games should be a breeze.

“It is likely to be a mixture of publishing first- and third-party games, and the licensing of existing third-party titles. Each license deal will probably have a similar structure but the terms will depend on the game involved, its age, and other factors.”

Netflix already has a massive built-in audience: reports from earlier this year indicate that there are more than 200 million subscribers worldwide. As such, the company shouldn’t have any trouble testing its gaming experiment. However, it will be facing some fierce competition on the game streaming front. Services like Game Pass have gained a lot of traction in recent years, and Netflix is somewhat inexperienced when it comes to the gaming audience. In this way, Harding-Rolls views the company’s expansion as a defensive move.

“The drivers behind [the expansion] are both defensive for its core SVoD business, and a potential longer-term games monetization opportunity,” he noted. “As such, its motivations are different from other pure-play games subscription services. That is an advantage as it can offset games content spend against the existing SVoD business, and of course it has a service of over 200 million subscribers--a huge addressable audience.”

Given the ubiquitous nature of gaming as an entertainment medium, it was perhaps inevitable that Netflix would make a play there. After all, many other non-gaming tech conglomerates have dipped their toes into the pool, such as Google, Amazon, and Apple. Netflix has even experimented with adventure-style storytelling in the past with the popular Black Mirror: Bandersnatch and Minecraft: Story Mode.

The overlap of Netflix subscribers and game players is substantial: according to Ampere, 69% of all gamers have access to Netflix.

“This large overlap is made up of a diverse collection of gamer profiles, and I think reflects why Netflix has already stated it intends to build games for a range of devices, screens and offer different types of gaming experiences,” Harding-Rolls said. “The start on mobile devices makes sense because speed to market has been quicker, distribution is essentially free, and mobile consumption of Netflix is high.”

It’s getting harder for tech companies to ignore the cultural impact (and revenue generation) of the video games industry. Moving forward, it will be interesting to track the progress of Netflix’s game experiment, and how it fares compared to other services.