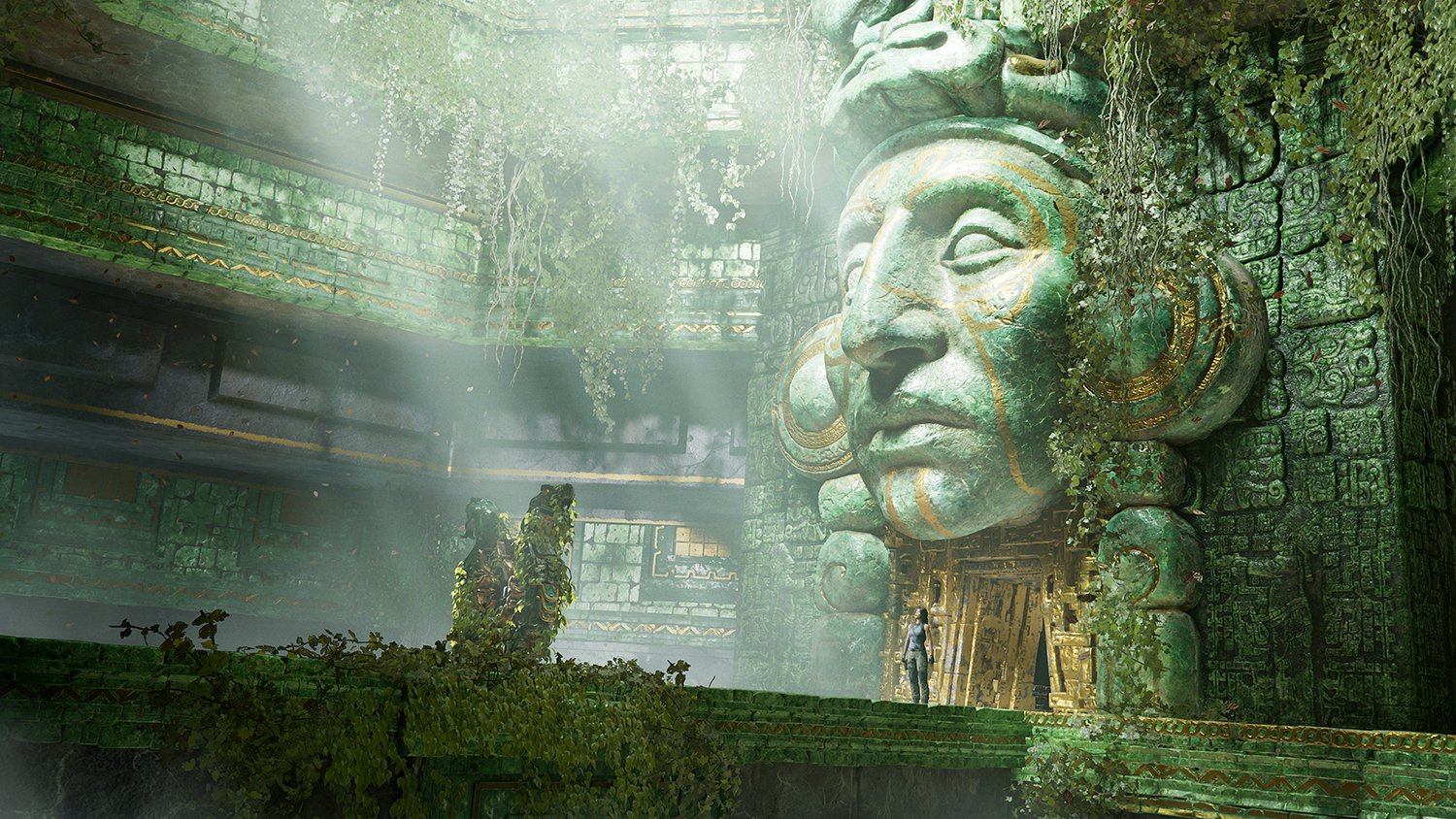 It’s been a scant five years since Square Enix rebooted Tomb Raider, transforming pinup girl Lara Croft into a deep, flawed, and vulnerable character. Now, as the end of Lara’s origin trilogy nears, senior gameplay director Daniel Chayer-Bisson and senior producer Mario Chabtini reflect on how the franchise and its heroine have evolved.

“I was game director on [Tomb Raider] 2013. I was there from the beginning,” Chayer-Bisson recalls. “I was the co-director on Rise. On 2013, we wanted to establish that Lara was not as experienced. We called it ‘desperate combat.’ Lara was always falling or stumbling. She was clumsy. We wanted to showcase how vulnerable she was. The combat, the puzzles, and the traversal were all about celebrating that. That's why she was more clumsy. She was reacting to the environment. With very small input, she was reacting very big.

“On Rise, we were treading that line between 'she's vulnerable' and 'she's not anymore.' She was getting to a point where she started to feel like she could take on the world. She's not there yet in her own mind. The way we approached Rise was about how fast she was becoming. That's why on Rise we had the axe on a wire and a bit of Tarzan. All the movement and traversal and climbing, we wanted it to be faster and less about stumbling and being clumsy. We wanted to expand her knowledge and understanding of the world. That's why we expanded the RPG elements. That's why we expanded the hubs, made them bigger, and made them feel more real. She's a little more aware of the environment.”

Shadow of the Tomb Raider is set in the jungles of South America, a drastic change from the snowy Siberia featured in Rise of the Tomb Raider. The new setting gives Eidos Montreal a chance to flex its technical muscles with physics-based, densely packed foliage.

“The camera is an object that you can't see, but it moves the vegetation,” Chayer-Bisson explains. “That's why we can have a jungle with a lot of foliage and a lot of light. You can move the camera, and you'll always see Lara.”

Eidos Montreal has re-tuned Tomb Raider’s gameplay formula. The series is built on three pillars: combat, exploration, and puzzles. There’s balance in Shadow of the Tomb Raider that wasn’t present in the previous two entries.

“We have less combat in the game, in general,” Chayer-Bisson says. “It's one-third combat, one-third traversal, and one-third puzzle. Before that, we were closer to about 60 percent combat in Rise.”

In previous Tomb Raider games, much of the tension came from the combat sequences. In Shadow, Eidos Montreal is using all the tools at its disposal. There’s clever narrative symbolism in the situations players will find themselves. I went hands-on with one of the challenge tombs, which felt more lethal than many of the exploration elements in earlier entries. On my way out after, Chayer-Bisson pointed out that to even get into the tomb, players will need to take a risk, and dive deep underwater.

“When you look at Shadow, she's going into more dark places.” he says. “She's going into hell. She's going where people die. That's why Lara is going underwater: down. Rappelling? Going down. The only way we really got to go down in the past Tomb Raider games is by falling or stumbling down. You talk about vision, being in control for her was extremely important to us.”

That same level of control extends to the player experience. Shadow of the Tomb Raider features three different difficulty settings for each of the pillars. If you aren’t proficient in combat, but want the maximum challenge for traversal and puzzles, you can tune the game to those specifications. If you hate getting lost, but want combat and puzzles to tax you, you can make sure the white paint that aids players in finding the path forward is extremely visible and leave the other options on more difficult settings.

“Being in control is extremely important in this game,” Chayer-Bisson explains. “That's why you control the difficulty settings. That's why you control if you want to be immersive or not. That's why you control her becoming the jungle. If you remember in Rise, you could see the path where to go. In this game, the crazy thing is that you can skip it by jumping and attaching and balancing and using your own way to approach it. Then you can say, 'I don't want white paint.' Gone. Then you have to try and see what you can interact with. It's a very different approach. Lara is more in control than we have ever seen. The gameplay and the story and the world needed to showcase that.”

The variety of difficulty options have had a wide-reaching effect for Shadow of the Tomb Raider’s development and reception. Preview coverage has lauded the approach, as the menus clearly detail what changes the different options make. The granular adjustments open the door to a wider range of players. The path to this decision wasn’t one of unanimous agreement, though. Chabtini says that he was actively opposed to the idea of pillar-based difficulty settings.

“The reason I wanted to cut it, is that when you think about it, there's three levels of difficulties per pillar,” he explains. “You have three pillars. So you need to balance the game nine times. That's a great idea, but we needed to close the project. In the end, we managed to do it, because we listened to players. They were all into it, so we said, 'let's do it.'”

The impact was palpable in playtesting. The team gathered more than 200 reports to determine where players were getting stuck, tuning the difficulties, and even including gentle aids at the highest difficulties where play tests detected blocking points. Chayer-Bisson says that the benefit of the multiple difficulty settings is that response in user testing improved drastically. More importantly, a level of consistency emerged in the responses, which is difficult to achieve when a game has multiple core pillars that are as varied as Tomb Raider’s.

Chabtini wasn’t incorrect in his worries, though. Finding the middle ground for each difficulty setting was a challenge, especially in balance with the other two pillars.

“What is the right 'normal'? For easy, you put white paint everywhere. It's thick like liquid paper,” Chayer-Bisson says. “On normal, you have to ask, 'What is normal?' Even on easy, it's not just about when the paint is thick, it's about when it's ok. Otherwise, everything is just white. In Rise, it was ok, because everything was snow. When you're looking at the jungle, it's all green, and the white was sticking out. Having the white become natural was still a problem for us. Hard is easy, because we just took it out. Even on the hard mode, we had to have some white paint stay there in the hard, critical moments, where people were just blocked. Some of the visual language needed the white markings. On hard, it's very little, and just in blocking places.”

For puzzles, the difficulty options determine how fast interactive elements move and the level of detail Lara offers players via monologue. In combat, enemy AI is drastically impacted by the setting. On easy, aggressors are only slightly more intelligent than a bag of rocks. On hard, they will instantly see Lara, radio for backup, and aggressively pursue her. Even at this level of challenge, though, players are now able to break off contact and wait for enemies to fall back into relaxed patterns.

There’s one thing that Eidos Montreal won’t tinker with, though. The amount of damage Lara can sustain must be constant, according to Chayer-Bisson, because it’s the only reference players have in the world.  There needs to be some baseline level of trust between developer and player, and in Shadow of the Tomb Raider, Lara’s health is that bond.

This entry demands more of players, increasing the challenge even at comparable skill levels from Rise of the Tomb Raider. “Having the difficulty setting, we could make the game harder to showcase how Lara is more hardened,” Chayer-Bisson says. “If you played this like Rise, you're going to have a lot of pain. It's going to be hard. Normal on Rise is Easy on Shadow.”

The knock-on effect is that players are likely to die more than in the previous games. This pushed Eidos Montreal to change the sequence of events when Lara perishes in combat or exploration. Tomb Raider 2013 featured a number of context-sensitive grisly deaths. At my hands, Lara was drowned and burned, her head dashed against a rock, and her body turned into swiss cheese thanks to some unfortunately placed spikes.

In Shadow of the Tomb Raider, Lara’s death is often implied. You’ll see her falling or slumped, but not overtly skewered… most of the time. Deaths fade to black much more quickly. It makes the point without beating the dead tomb raider.

“In 2013, games were easier. What we wanted to do, since death is iconic in Tomb Raider, we wanted to make sure that people felt bad when Lara was killed and didn't want her to die,” Chayer-Bisson explains. “I wanted a sense of punishment. The other thing is that when people were dying on screen, they said, 'I don't want her to die. I want her not dead. Just doing something.' We ended up having some gruesome, tortured deaths, because Lara was not allowed to die on screen. So she was moving. The obvious benchmark for that is when she was sliding and got a spike in her head. The spike is in her head, and you feel bad, so you don't want to do that next time. That's why she's moving her hands over the spike [in Shadow of the Tomb Raider] and you never see her dead. On Rise, we toned it down. On Shadow we toned it down even further, because you die way more often. The amount of death you have is quite high. Seeing the same thing—a spike in the head each time—it becomes too much. That's why we toned it down. It's ok to die 20 times without feeling extremely bad after each one.”

Shadow of the Tomb Raider is the end of Lara’s beginning. It’s a culmination of what Chayer-Bisson, Chabtini, and the rest of the Eidos Montreal team have learned since work on the 2013 reboot began. In many ways, it’s also a step forward for how developers can think about difficulty settings as a means to welcome more players in and take bigger risks with challenge. And for publishers, the results Eidos Montreal earned in play testing: higher marks and more consistent feedback, can be a key to staying competitive in a marketplace that’s becoming more crowded by the year.