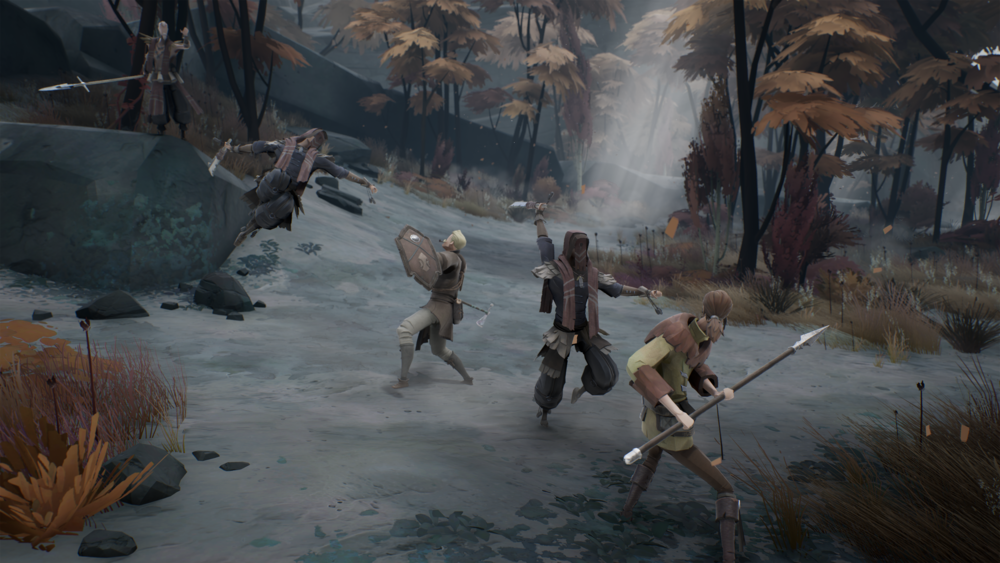 The first thing many people think of when they hear the words “stamina-based combat” is Dark Souls, which has become something of an industry standard for the genre. Ashen, an upcoming game by New Zealand studio Aurora44, published by Annapurna Interactive, is looking to combine Dark Souls’ impeccable combat with Journey’s effortless multiplayer and a Skyrim-lite open world. Mixing three of the most celebrated games in their genres is a heady promise, but one that could be exceptional if they pull it off.

“To even get compared in any way to Dark Souls at this point, it's honestly a bit humbling because that's way bigger than what Ashen is,” says game designer Derek Bradley. “But at the same time, it's the gold standard of stamina based combat. Our hope is to make it a bit more accessible with the multiplayer.”

The multiplayer will allow players to find each other serendipitously throughout the world of Ashen, with similar goals. This means you’ll likely work together when you find each other, but it also means you can run in the other direction and never see that person again. Unlike Dark Souls, playing with others is the developer’s preference. It’s how the game was designed.

“You can choose to turn off the multiplayer and play solo,” Bradley says. “If you do that, it's probably a little bit harder than Dark Souls, because the whole game is balanced to two players. Whereas for folks playing Dark Souls, when you and another person do match up and do a boss run, you just cut through everything like a knife through butter. It's unbalanced. Which is fine because the game's not really made for that. Ashen is certainly all set up around playing as two players.”

Many developers have sought to emulate Dark Souls’ challenging but fair combat, but few have succeeded. What makes it so difficult?

“Stamina based combat is hard,” Bradley says. “You have to iterate a lot and continually question what you've done to get to that point, because you're going to have about a hundred epiphanies on the way and each one will be a game changer and you feel like you've finally got there. Then next week you need to figure out why you haven't got there just quite yet, because it's a very detailed thing. Folks will start off and say 'Okay, I understand iFrames, I understand rhythm, I understand all this stuff'.

"Mostly they are, of course, super skilled players as well, that do actually understand this stuff. They would start with what you know as a player and they'll scratch off that first layer. And that's good stuff! Like iFrames and rhythm, but there's at least ten more levels after that which you've got to get through.

“It's almost invisible stuff that as a player you never need to know or engage with, but it feels better if you know that stuff. It gets fairly intense. Advice that I would certainly give is listen to hardcore players, because they really do know this stuff and they often know it from different angles. Just getting your game into the hands of people is really important. We've done focus tests, we've been to a lot of conventions, we do a lot of playtests. At one point we employed playtesters just for a week at a time. They'd apply and we would have them in the studio playing alongside our designers. It helped us with the stamina based combat side of things that also helped us with balancing. We have a lot of metric tracking software in the build that they were playing. It would be way too heavy to be shipping with that level of tracking because it was quite cumbersome, but it for us it was super informative. You'd see exactly where they were at any moment, exactly what they were doing and you could figure out whether your theories panned out or not.”

Ashen is Aurora44’s first game, but the team is made up of professionals with not only games experience, but with experience working at one of the finest CG houses on the planet: Weta Digital. The crossover between computer graphics for movies and making games is not insubstantial, which makes New Zealand an up and coming area for games development.

“There's a few interesting things that have come out of New Zealand,” Bradley explains. “DayZ creator Dean Hall is from New Zealand originally and he's moved back there to set up a studio at the moment so he's around. Path of Exile developer Grinding Gear Games is from New Zealand too. There's a whole bunch of other smaller ones as well. It’s a pretty tight knit community and it's certainly one that's growing at the moment. It's got a pretty good backbone from having people like Grinding Gear Games, but actually the film industry gives it a very strong artistic and technical background just because Weta makes their own render engine. They've got the biggest supercomputer in the southern hemisphere. They employ 1500 people. So because of that you tend to have quite a good solid backbone for an industry.

“Weta Digital in particular is a bit like the United Nations. When I worked there I didn't feel like I was in New Zealand. Everybody from every country is there. They recruit very internationally. It's great also for the local people to learn. Local New Zealanders going into that, they realise what it takes to do things to a world standard.”

The founding of Aurora44 was not dissimilar to Bilbo Baggins’ quest to the Lonely Mountain. There and back again.

“I gathered a couple of people and obviously working in our good jobs at Weta Digital, we were getting paid well, working on big, exciting things. Working with great people,” Bradley says. “We left that to essentially... So, that's based in Wellington which is the bottom of the north island of New Zealand. We left that and went about an hour and a half north out of Wellington, where you've got to go to a couple of smaller cities, some farmlands, a mountain and then hit this small town of about 2000 people.

“We moved out there just because... London would be way worse, for example. It's simply a case of would you rather have a rat hole in the middle of London and be able to survive for a couple of years or have a massive piece of land out in the countryside? So we had a really nice big house. We set ourselves up quite comfortably there and just decided 'We're doing this no matter what'. It was essentially a bit of a hermitage out there. And that was where we were until Annapurna got involved.

"After that we transitioned to offices much closer to Wellington. Some really interesting studios which were actually film studios before. They were color grading suites that we've taken over. A lot of Peter Jackson's first movies were filmed there. They're always filming stuff up there. The whole bottom level is full of soundstages. It's quite good for the energy of the team to see these big productions coming through all the time.”

Annapurna, Ashen’s publisher, is becoming more and more well known for its bespoke indie titles with astonishing artistic and narrative vision. What Remains of Edith Finch, for example, won Best Game at the 2018 BAFTA Game Awards. The publisher continues to handpick games that fit their consistently high quality artistic standards, which is exactly what they did after Aurora44 showed off the first trailer for Ashen at E3 2015.

“We had a trailer in 2015 E3 Xbox briefing,” explains Bradley. “It was very interesting as my first ever experience of E3 was stepping onstage to talk to people at the briefing. But it was good, we got a trailer at E3 that allowed people to see what we were up to and Annapurna were interested and we took it from there.

“I think Annapurna have got very good design sensibilities. They align with developers quite a lot because they've come from a very development background. The people who are executives there, like the producers, have actually been game designers or they've worked in QA or they've worked somewhere else in the industry before being a producer and before working in publishing. A lot of them came from Sony Santa Monica, for example, so their sensibilities align a lot with ours. I think you'll continue to see interesting things from Annapurna. They are a very ambitious group of people.”

The development process been fairly smooth for Ashen, it seems. By planning ahead and being realistic about the game’s scope, the developers were able to take advantage of resources that, in another universe, might have been needed to put out large fires and use them to add more to the game. A great example of that is character voice over. This was initially outside of the scope of the game, but was later added due to feedback from playtesters. And because they had the bandwidth to do so. Something that’s pretty uncommon when it comes to game development.

“We started by thinking, 'We want to do it as it as text because we don't necessarily want to give the characters an accent',” says Bradley. “That was an interesting stylistic choice but as we tested we changed our minds about it because... What about people who are auditory learners? They just won't retain it all as well as people who learn better by reading or people who learn better from all the visual cues that we're putting around. It's more or less about friction. So people don't have to bump their heads against things things that they don't naturally just slide through. Because there's other stuff in the game that they can bump their heads against that we want to explicitly give them.”