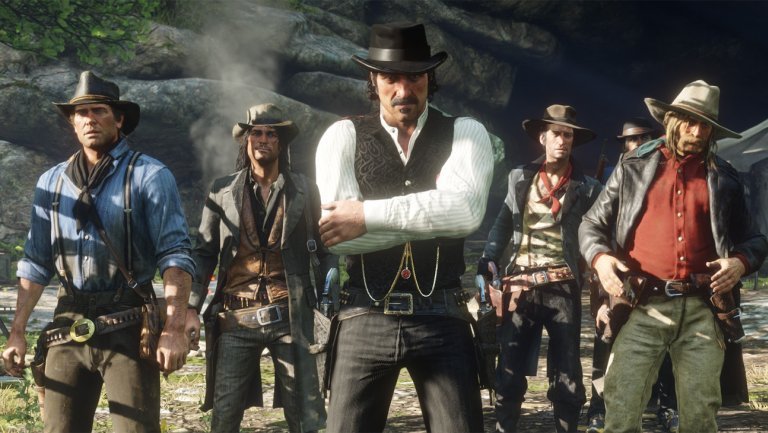 [Update] Take-Two stock has been surging on the big sales news for Red Dead Redemption 2. The publisher's shares have climbed nearly 10 percent today to $122.68 as of this writing.

Red Dead Redemption 2 is, unsurprisingly, off to a fantastic start. Rockstar Games and Take-Two Interactive announced this morning that the sequel has already become the biggest entertainment launch of the year by generating $725 million in sell-through revenue in the game's first three days at retail. And because Grand Theft Auto V had launched on a Tuesday back in September 2013, Rockstar is also claiming that Red Dead Redemption 2 had the biggest opening weekend in entertainment history. Overall, GTA V did have a bigger launch with $1 billion generated in its first three days.

Rockstar did not provide a digital versus physical sales breakdown, and it's currently unclear if these figures include digital sales. That said, Sony Interactive Entertainment did note that Red Dead Redemption 2 set new records on PlayStation Network for highest ever pre-orders, highest day-one sales and highest sales for the first three days in market. Curiously, there's no mention of Xbox, even though a technical analysis showed that the game plays with the smoothest frame rate and highest fidelity on Xbox One X. GameDaily has reached out to the Xbox team for comments.

It's clear that Sony has put a big push behind Red Dead 2, however, featuring a PS4 Pro bundle that effectively includes the game for free, and a marketing partnership that offers PS4 players first access to earn select online content in Red Dead Online, which is about to release in November. Sony has not announced how many units of the Red Dead bundle were sold though.

Red Dead Redemption 2 has seen nigh universal praise, with an average review score of 97 on Metacritic, but it remains to be seen what kind of legs the game has in terms of sales.

Wedbush Securities analyst Michael Pachter noted that the sales figures imply around 12 million units sold at launch. He commented, "The open question is how to value the lifetime potential of RDR2. There have been few games with three-day sell-through announcements, so it is hard to gauge what the first few days of sales imply about the potential lifetime sales for a given game. We think that first-day sales for a well-publicized game may approach 40% or more of fiscal year sales, implying that the 12 million units sold over the first weekend extrapolates to 29 million or so by March 31. However, new data could influence our thinking, so we think it is prudent to model 20 million units in the December quarter and re-orders of 3 million in the March quarter."

GameDaily reached out to NPD analyst Mat Piscatella as well, who told us, "Back in July, I predicted that we would report Red Dead Redemption 2 as generating the highest full game dollar sales in the U.S. this year. I'm holding to that prediction, although I do expect it to be a pretty tight race between it and Call of Duty: Black Ops 4. The wild card is Red Dead Online, scheduled to have a beta release in November."

GTA V and GTA Online are major reasons for Take-Two's solid fiscal performance year-in and year-out. The publisher no doubt has high aspirations for Red Dead Online, but as an online experience it's still an unproven entity. The company wisely included GTA cash bonuses for Red Dead 2 pre-orders as it knows that GTA Online continues to be a cash cow., but Red Dead Online could prove to be a great games-as-a-service revenue generator too.

"Grand Theft Auto Online is a phenomenon and has been a leading driver of the long-term sales performance of Grand Theft Auto V, the best-selling game in tracked history. So the real question is what will consumer response to Red Dead Online be, as that will determine the strength of what will almost certainly be an extended sales curve," Piscatella continued.

Red Dead Redemption 2 offers a vast world to explore with more than 60 hours of content. Will people be so absorbed in the game that other triple-A titles this season could suffer? Piscatella does not buy into that view.

"I do not believe the market is zero sum, and the more variety of big games we have coming to market the more dollars consumers will free up to buy them," he said. "We're seeing record setting launch sales performances across a number of major titles already, and I expect this trend to continue. We're seeing more people buying and playing games because of this increase in variety and scale of the games being released, which allows a larger addressable market for the other games being released. So I see a cluster of big games like we have this year as being very good for the market overall."

Unlike previous triple-A blockbuster launches, it's hard to ignore the elephant in the room when it comes to reporting on Red Dead Redemption 2's incredible success. The conversations about crunch and how Rockstar perpetuated a "culture of fear" are only just beginning, and all the success the studio is seeing would not have been even remotely possible without the tireless efforts of its dedicated developers who often put in 60-hour weeks or more.