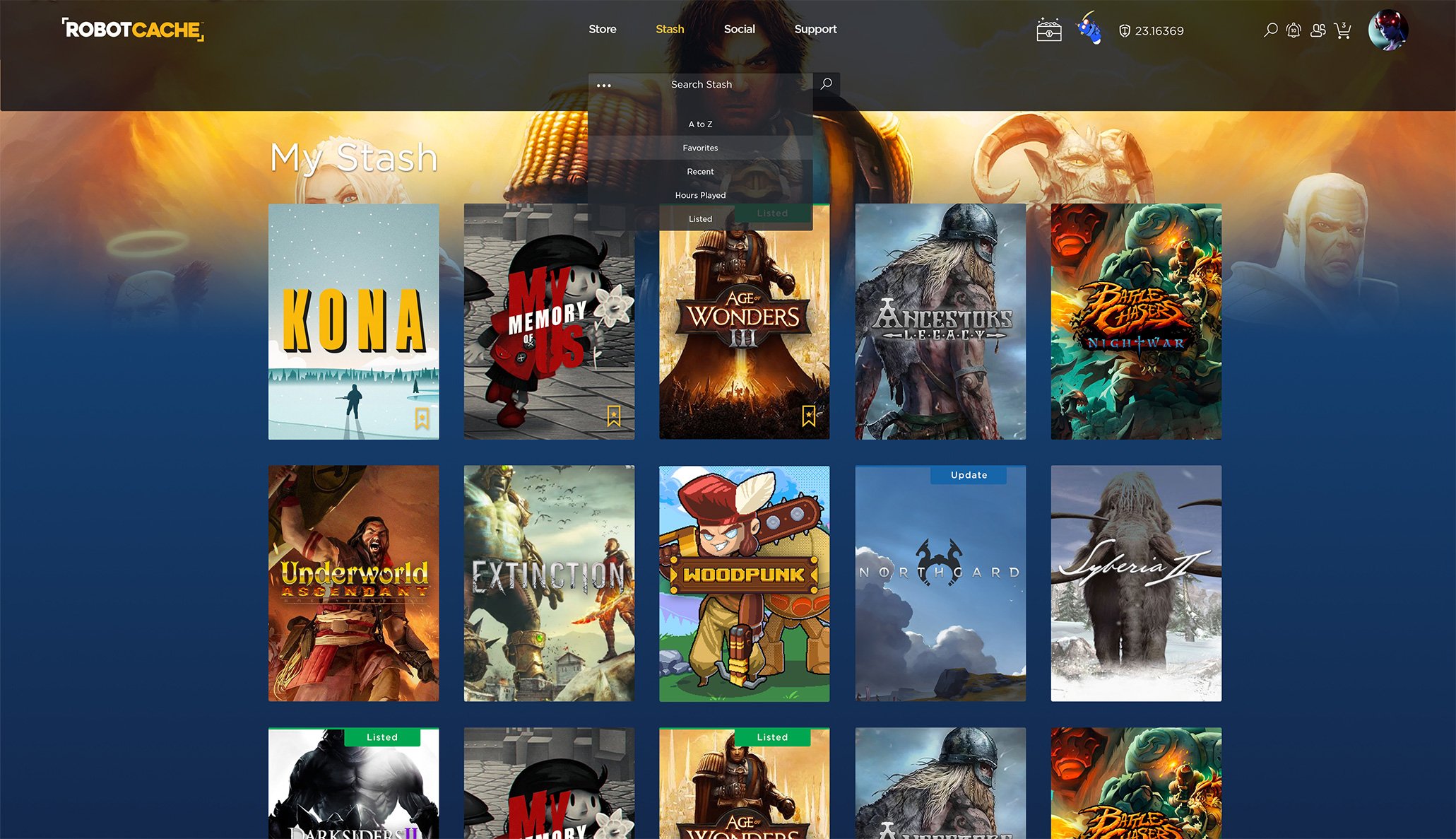 The digital storefront arena is about to get a bit more crowded as Brian Fargo’s Robot Cache prepares to step into the ring. Fargo, who founded Interplay in the mid-80s, is looking to leverage decades of games industry experience to create a first-of-its-kind marketplace in Robot Cache -- the only digital storefront with plans to allow the reselling of games.

Robot Cache is nearing launch of an early access version of its storefront, and has announced that many prominent publishers and developers will offer their games for sale. As of today, there are 23 publishers coming to Robot Cache, including Paradox Interactive, THQ Nordic, Devolver Digital, and Fargo’s own inXile Entertainment.

“These creators are bringing more than 700 great games to the platform at launch next year,” Robot Cache CEO Lee Jacobson said in a press release. “Their support means that we will be able to give gamers the largest launch library in the history of video games with even more to be announced soon.”

Allowing players to resell their games is a first for digital marketplaces, and Jacobson sees this as Robot Cache’s ace in the hole. “We think it’s the holy grail!” he told GameDaily via email. “Gamers have insane libraries of games that collect digital dust. When we tell our story, people immediately get it, they literally say ‘what a brilliant idea, but wait how is that possible?’ It’s an idea that wasn’t possible without the immutability of blockchain…and so the story goes, new technology leads to disruption and innovation. We’re building on the premise of ‘everyone wins,’ truly embracing a fair economic model for all involved.”

By using the ledger-like functionality of blockchain, Robot Cache will be able to reduce the fees involved in selling digital games, and allow players to resell titles they no longer play. Jacobson was quick to point out that Robot Cache’s economy is not based on cryptocurrency. “Robot Cache [is not] built on a cryptocurrency foundation,” he said.  “Like other video game distribution platforms, you use real money to purchase games. But one of our differentiators is to offer mining on an opt-in basis.” The “mining” Jacobson is referring to is done by players who opt in, and rewards them with IRON, a special virtual currency that can be redeemed for games.

Because Robot Cache is unique in its approach to digital game sales, Jacobson said that there have been a number of challenges his team has faced during development. “Starting a new company as disruptive as ours is always going to be a challenge,” he said. “We started from the ground up and had to work through our business model and the technology side of it, since we’re blazing new trails. But we’ve made so much progress thanks to a very talented team. Next we’ll be investing in exclusive content and marketing as we approach the Early Access launch.”

Revenue splitting is a hot-button issue in the world of digital marketplaces. When Epic announced its 88/12 split in favor of developers, many praised the decision. Not one to be outdone, Robot Cache is looking to raise the bar yet again by announcing that publishers will be able to retain up to 95% of a game’s sales. With only 5% going to Robot Cache, some might question the viability of such a business model.

“For too long, we all accepted that 30% was just the cost of doing business. We at Robot Cache believe we do not need that kind of margin to succeed,” Jacobson said. “We are trying to revolutionize the way we distribute PC games digitally and in the process create a fair ecosystem where developers and gamers both win. We think that being able to give more revenue back to the developer as well as allow them to share in the resale of their game will help them grow, as well as reinvest in their company and reinvest in their games.”

With the Epic Games store and Robot Cache aiming to make an impact on the digital games market, the competition for business is heating up. Jacobson feels that such competition is good for consumers. “Clearly, it’s time for disruption and this is when free markets are at their finest,” he said. “Competition breeds better solutions and we couldn’t be at a better time to be bringing one to market. And we’re going even further with resell and gamification, which are super unique to us, meaning we’re well positioned to be a destination that consumers’ favor.

“We’re committed to building a fair ecosystem by disrupting dated distribution models. Robot Cache is the first digital distribution video game platform in history to ever allow gamers to resell games from their library and the first to provide developers with a new revenue stream from the reselling of games.”