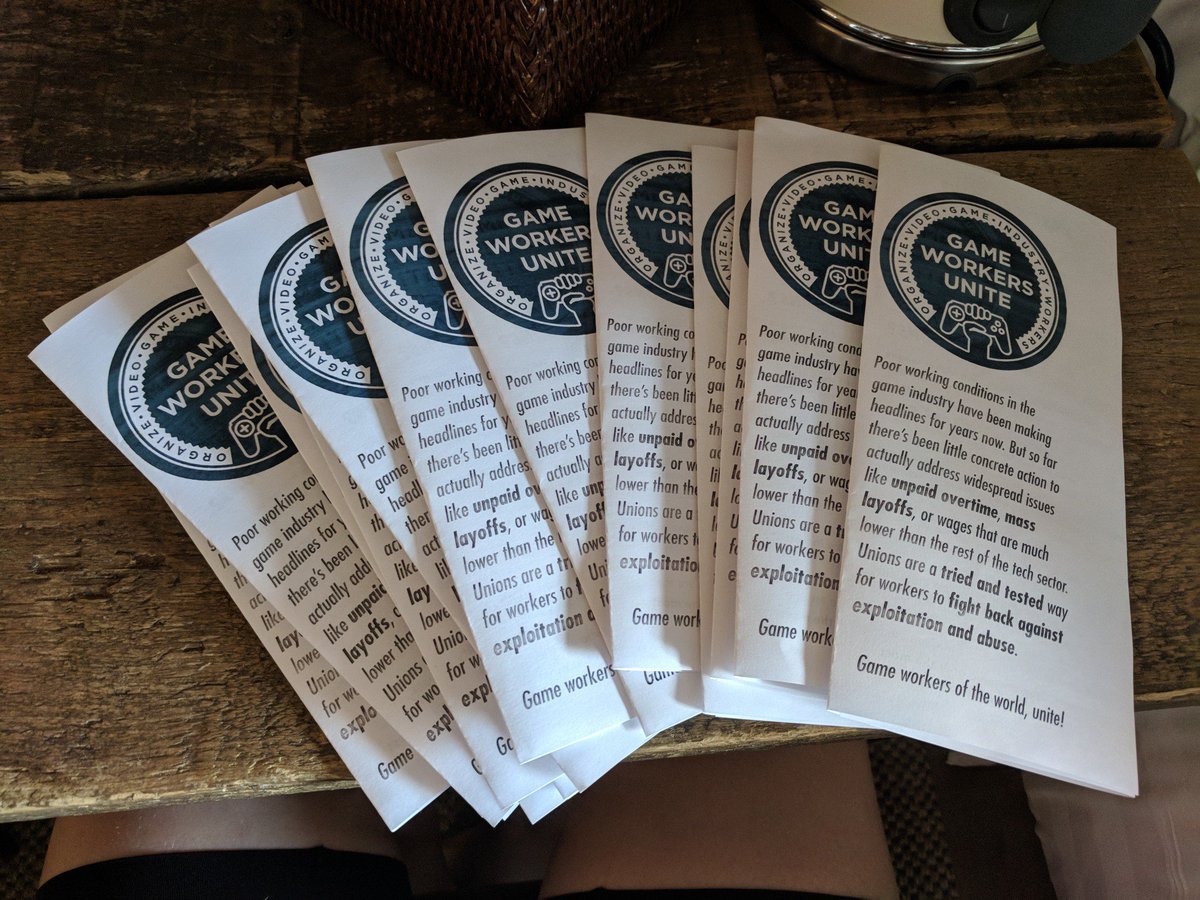 Game developers are increasingly pressing for unionization. Just nine months after the Game Developers Conference hosted a divisive standing-room-only roundtable discussion on unionizing, Game Workers Unite has branched out to the United Kingdom as a legal trade union.

The news came Friday morning via Game Workers Unite UK's official Twitter account. The union joins local chapters across the U.S. and Canada, as well as national organizations for Brazil, Australia, Germany, Spain, and Sweden. GWU UK is also part of the Independent Workers Union of Great Britain, a "worker-led union" founded in 2012. IWGB mainly represents low-paid migrant workers, "gig economy" freelancers, and other workforce sectors that have "traditionally been non-unionized and under-represented,” according to the union’s about page.

“So proud of our comrades at @GWU_UK for putting an official trade union together, and can't wait to see how conditions improve for our worker friends there,” Game Workers Unite’s Toronto branch tweeted. “This is the power of organized workers!”

In an interview with GameDaily, Game Workers Unite International Organizer Emma Kinema stressed that Game Workers Unite UK is "doing unprecedented work" for the UK game industry. According to her, the union has already "helped jump start the conversation around improving working conditions and creating a community of worker-organizers" in the country.

“A lot of people know that unionization is essential for improving our industry's conditions, but those people are already supportive to this cause,” Kinema told GameDaily. “Far more people need to actively see unionization in action before they are convinced, so seeing GWU UK make public strides to organize workers on a national scale is crucial to inspiring the vast majority of the industry's workers to get involved.”

GWU's success in the UK may influence further change to protect industry workers, although Kinema stressed that GWU UK's impact on the industry "will have to come with time as various companies become unionized."

“GWU International's mission is first and foremost to support all game workers seeking the support and solidarity of union in their company,” Kinema said. “We will continue our current organizing campaigns around the world and continue to help establish new local and national chapters in order to help train up new labor organizers in all areas of the game industry!”

GWU UK's Declan Peach told GameDaily that he began organizing a UK chapter after GDC 2018. GWU International put Peach in touch with trade unionists and activists, and he was soon introduced to IWGB.

"Part of the meetings I was having was with IWGB, who proposed the idea of forming a branch with them," Peach told GameDaily. "We, as an org, put it to a vote and was near-unanimously decided to form a branch with them. I had met a number of other unions prior both in the guise of seeking advice and networking, as well as proposing the formation of a branch. IWGB was most appealing to our members as they had a clear history of affecting change in their short history, and we wanted to work with people who were radical and prepared to counter any backlash we might encounter when unionizing."

Alongside improving working conditions as a whole, GWU UK hopes to help developers disputing with employers.

"Additionally, we've already begun creating spaces where workers can safely discuss their workplaces and get advice on their rights, the law, and their work as professionals," Peach told GameDaily.

Game Workers Unite initially grew as a grassroots campaign amid GDC 2018’s roundtable discussion “Union Now? Pros, Cons, and Consequences of Unionization for Game Devs Roundtable.” International Game Developer Association (IGDA) executive director Jen MacLean moderated the panel, which The Verge described as “a tense affair.” Previously, MacLean had offered skepticism against unionization, telling Kotaku that she doesn’t “think there’s a clear and easy answer here” and that there may be “seen and unforeseen consequences” involved.

Waypoint criticized MacLean, arguing that her "defensive posture” as a moderator at GDC “amounted to anti-union rhetoric" and that the IGDA was skewed "towards the bosses" and against unionization. That said, MacLean’s point of view is more complicated, and it’s clear she understands the problems at play with maintaining work-life balance for game developers. In an interview with GameDaily from September, MacLean argued that there are different workplace expectations for different companies, and that workers may be pressured into hours that conflict with their lives outside of work.

“When we think about something like crunch, if you are interviewing for a job at Rockstar, you know what you're getting into in terms of crunch,” MacLean told GameDaily in September. “You can have a lot of discussion about whether or not their philosophy is healthy or whether it's right for them or the game, but at the end of the day, you know what you're signing up for.

“On the other hand,” she continued, “if you are interviewing with a company and you say, ‘Look, I'm a working parent. It's really important to me that I be able to leave at 5 PM every day,’ and your interviewer says, ‘Yes, of course. We are totally supportive of that,’ and then you start getting pressure to stay late… that's not okay.”

“When we normalize, or—even worse—brag about, 100-hour workweeks, we harm our fellow game developers,” MacLean told GameDaily in October. “Sustained overtime has been proven time and again to have severe detrimental impacts on a person's mental, physical, emotional, and financial health. No game, no matter how many units it sells or how many awards it wins, is worth the human cost of damaging the lives of its developers.”

While MacLean clearly has a complicated opinion on unionization, former IGDA executive director Kate Edwards has directly praised Game Workers Unite. In an interview with GameDaily from November, she suggested GWU is doing "a very, very vital part of the conversation that needs to happen." Granted, Edwards understands unions aren't a magic bullet to the game industry's problems, but she argues they protect workers from poor management decisions.

"That's the whole goal, to provide a buffer zone so that if there is a massive layoff, you will have protections, you will have severance, you will have benefits for a certain amount of time,” Edwards said in November. “All of these things are assurances that help buffer you from the stupidity of people making bad decisions at the top.”

It’s difficult to say where the industry will move next, but unionization clearly remains on the table as Game Workers Unite grows. At the very least, it seems the industry is ready to have the difficult discussions it needs to about work-life balance and abusive crunch environments, even if industry advocates disagree about unionization as the next step.