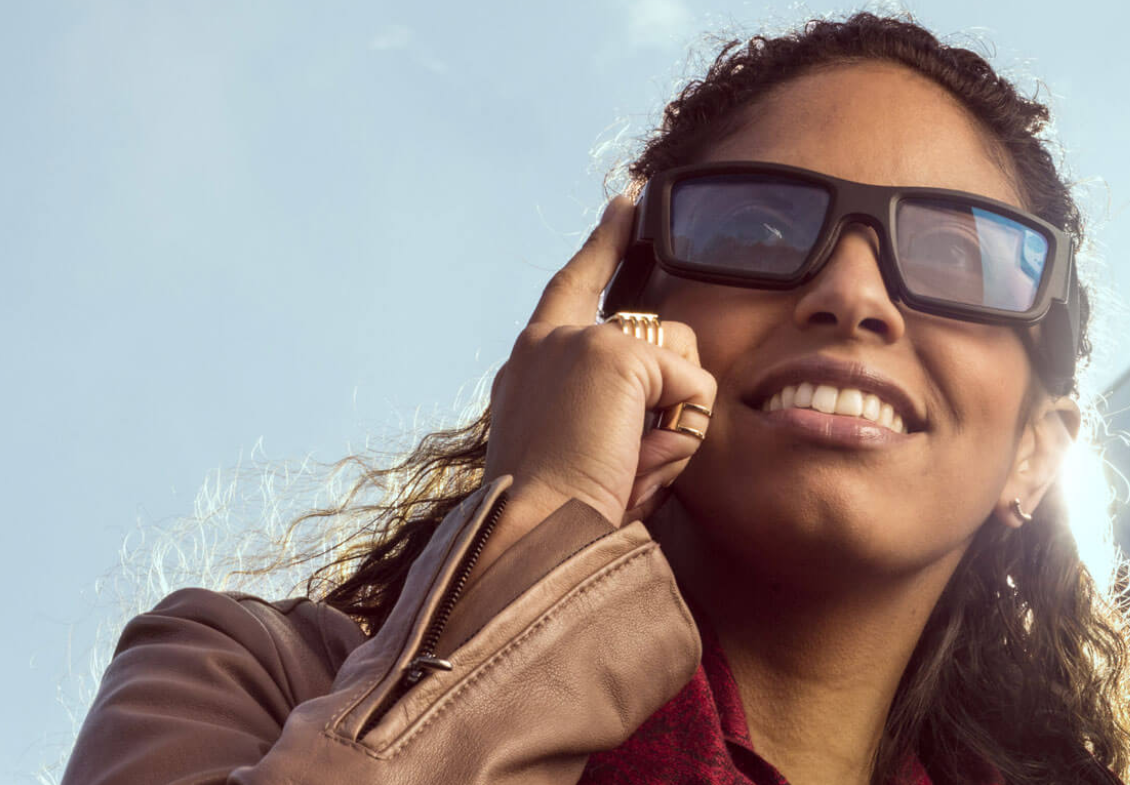 Imagine a world where Netflix, news, weather, games, whatever you're most connected to, really -- all of these daily (dare we say, hourly) apps are all a tap away, right in front of your eyes. This concept, relegated to cyberpunk and science-fiction, is quickly moving towards becoming, well, fact.

Rochester, NY-based Vuzix is working to make that a reality. The company has just started selling its Blade AR Smart Glasses to consumers for $1000, and it also received a CES 2019 Innovation Award for the technology. The idea is to provide users with all the functionality of a phone without ever needing to take the phone out of your pocket. And ultimately, Vuzix CEO Paul Travers told GameDaily that glasses like these will completely replace the phone.

I met with Travers at Vuzix’s Rochester, NY headquarters. Travers has been working in the AR/VR space since the early ‘90s, but it’s only now that the technology is getting to the point where it’s streamlined enough to become mainstream.

“I think Palmer Luckey was one years old when I started a virtual reality head mounted display company in '93,” he said.

The company wasn’t called Vuzix then and it went through a number of name changes. In the mid-90s, the biggest opportunity was for defense markets.

“Our focus has been on the wearable technology market,” Travers continued. “We started with making thermal weapon sight engines and then monocular devices. It was more focused on special forces. You know, you've got drones going around buildings, so you're watching video feeds on them and those kinds of things. If you think about it, that's the beginnings of the wearable tech market. These guys were wearing 150 to 300 pounds of gear in the field and they were trying to connect the digital world to the real world. When we were talking with those guys, they really wanted glasses that looked like Oakley style sunglasses.”

Fast forward 30 or so years, and Vuzix is almost at that sunglasses-style tipping point. Travers showed me a progression of the glasses and the prototype for how thin the next model could be (pictured below). The company is working on shrinking down its proprietary waveguide, which displays the superimposed image on the lens. Vuzix’s bread-and-butter isn’t true AR. It’s more about augmenting your field of view with information or entertainment that you would ordinarily get on your phone. It’s more akin to Google Glass than Magic Leap, which is a deliberate distinction.

“It's really hard to make things people will wear,” Travers said. “Just think about Magic Leap. It's not that comfortable and you look like you just stepped off the Starship Enterprise. We're not believers in that. So our focus is on making it so people will want to wear it. If you can make a product that Apple would want to put their name on, you at least have solved the problem associated with wearability.

“And so we have a lot of energy that we're putting into that. And then the whole ecosystem, app store, developer tools, developer community, all of that we're pushing really hard right now. But we see it a little bit differently than Magic Leap does. We're not trying to build gaming systems, per se. We want location aware content. We want it so you can easily put your phone in your pocket. We want use cases where people are like, ‘Man, how did I ever get this done before?’ I think in the grand scheme of things that’s really more important than a few hundred games. There are a lot of VR titles out there today, but the VR systems aren't really taking off yet. It's not going away, don't get me wrong. But it hasn't turned into the next Xbox.”

Travers doesn’t necessarily view Magic Leap or HoloLens as competitors, since they’ve taken a different approach to augmented reality. Neither has keyed in on wearability from the early stages.

“Magic Leap sold their business based upon whales jumping out of gymnasium floors,” he remarked. “I'm not saying it's not a cool concept, but if you look at their headset, for almost three grand, it's a pretty big and bulky thing. It reminds me of a VR system.”

Similar to Magic Leap, Vuzix has been focused more on the enterprise arena so far, but gaming is certainly going to be an area for the Blade smartglasses too. I played around with some simple demos, shooting spaceships, dinosaurs, etc. It’s not mind-blowing stuff, but it’s enjoyable, and with more developers coming on board, the app market is sure to produce a few gems as it matures.

“There are currently over 400 developers a month signing up on our website,” Travers said. “It's mostly smaller guys because the bigger guys are like,’Tell me when you've got 5 million of them in the field and we'll support it.’ But there's a ton of little guys. Social media services [will be big too]. There's one guy in the UK, his whole company - it's running on Apple, but it's a dating app. He's like, ‘I'm telling you, it has to be on your glasses for so many reasons, so many environments I want it for.’ So it's guys like that doing some pretty far out stuff, from entertainment to social media to even facial recognition kinds of things if you opt in.

“Atari wants us to come out with a couple of titles, kind of revamp them on these glasses. We're working on it. There's no doubt, I think gaming's going to be a big play for this. I think location aware gaming [should be huge]. Think about Pokemon Go in these glasses. You don't have to take your phone out anymore. [Rochester developer] Workinman's got another title where they use the GPS on the phone and you run down the streets wherever you happen to be and when you block off a street through the glasses, it turns blue. And so you're collecting blocks, street blocks, and the other people you're playing with do the same thing, so they can turn green and they can turn red because it's networked.”

Google Glass wearers were often mocked, but society’s attitudes towards connected devices continues to evolve. People are trained to hold up their phones as cameras or AR devices from an early age. The social awkwardness may be fading. Making the glasses as thin and unobtrusive as possible is only going to help.

“This is designed so you can walk down the street, wear the glasses, and not feel out of place,” Travers said. “The vice president that we're talking to at Yelp, he's been wearing them out in San Francisco. He said nobody's ever looked twice. They're not perfect. But they're gonna get better and better.”

With 5G around the corner, Travers sees big possibilities for offloading a lot of the computing that would have been needed inside the glasses in the past. The cloud has become extremely powerful.

“You can run a full Xbox out of the cloud right now. And that will allow you to have lightweight, smaller batteries, etc, and still have amazing performance,” Travers affirmed. “So with 5G, getting rid of the CPUs, power consumption goes down, and you've got super performance. And then you can make glasses that people will want to wear because you don't have all that stuff packed in them.”

The Blade smartglasses have built-in audio, but also work with micro USB or bluetooth headphones. You can also get prescription lenses if needed. The glasses being sold as of today offer support for Google Assistant and Amazon’s Alexa as well. It’s clearly very early days, but the potential is certainly there.

“For developers in general, AR glasses is a new paradigm,” added Corporate Communications boss Matt Margolis. “As we solve the form factor, that opens up a lot of opportunities. Even the folks that work at Magic Leap, some of the stuff they're doing is not traditional gaming. They're building certain experiences, leveraging AR, and their skills for the development side. So we can gamify a lot of things.”

Unlike Magic Leap’s creator program, for which the company is investing “eight figures” to support developers, Vuzix won’t be covering developer costs on that scale, but the company does plan to give the right developers free kit to work with.

“We're a small company, so it's hard to do this for everyone, but we give away a fair number of units, strategically,” Travers told me.

And it’s important to recognize that Vuzix’s Blade smartglasses have already become a consumer product, albeit a pricey one. It’s required a little bit of outside-the-box thinking for the company. Travers said they’re currently negotiating with wireless carriers to start reselling the Blade, and he also described a unique bundle with a golf company out of Buffalo, NY.

“We're working with companies like OnCore Golf,” he said. “They have this golf ball that they're coming out with that's got a bluetooth link. So the glasses tell you how hard you hit the ball, how far it went, and all this stuff and they're planning to bundle it with a golf ball. That's a consumer product right there. In January people will be able to buy these things and enjoy them as a consumer product.”

Attendees at CES next week will be able to check out Blade demonstrations for themselves. Vuzix will be holding demos called “A Day in the Life with Blade," which factor in the OnCore Golf product, AccuWeather integration, Amazon Alexa, Google Assistant and more.