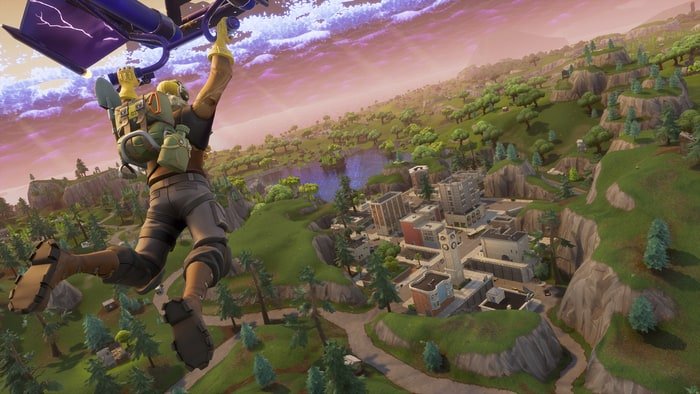 Fortnite is the biggest phenomenon in the industry right now. There are over 125 million players (in less than a year), and fans across the globe can't get enough of the battle royale game, which also has a whopping $100 million prize pool for its esports competition. Yesterday, Nintendo announced that it, too, would be joining the fray with Fortnite launching on the Switch right in the middle of E3 2018. And as happy as that news made Nintendo's more than 17 million Switch owners, they were met with a rude awakening: cross-play with Sony's PS4 and progression from Sony's console would not be carried over when playing on Switch.

Specifically, any Fortnite player that has ever used an Epic account with the PS4 version cannot then transfer progress to the Switch. Furthermore, it also impacts players moving in the reverse direction: If you've used an account to play Fortnite on Switch then it can’t be played on the PS4. If that seems utterly asinine, that's because it is.

This stems from Sony's long-standing cross-play policy of blocking compatibility with competing consoles. Sony does allow for compatibility between PC and mobile, but frankly in this modern games-as-a-service era, it's the game that carries the most weight. Fortnite players don't want to be restricted by a petty policy that feels like a remnant of a bygone era; gaming today needs to be accessible anywhere, anytime and without platform holders throwing up roadblocks. This is one of the advantages of cloud gaming, as Electronic Arts pointed out, but the industry isn't quite ready to make the leap into the cloud.

In the meantime, the reality of today is Sony is sticking to a policy that is going to backfire in its face and create a sizable headache for its public relations department. And what's ironic about this whole situation is that Fortnite began to make its mark in the console world on PS4, leveraging Sony's sizable installed base while PlayerUnknown's Battlegrounds (PUBG) was surging in the PC market and was quickly followed by an Xbox version.

The backlash is palpable. Mainstream publications like Forbes are now calling Sony out, saying the company "lost E3 in a spectatcular fashion."

"The slowly developing message would seem to say that if you want a console that works with the broad-based, cross-play game ecosystems of the future, you're better off with Microsoft or Nintendo," wrote David Thier. "This is what Microsoft's Phil Spencer has been trying to say for a few years now, but it took Sony's self-inflicted wound to put a fine point on it."

For many PS4 owners, the Switch is their second console... Making those Switch owners unhappy is tantamount to Sony shooting itself in the foot. This is a situation that is quickly spiraling out of control, but there's time to fix it.

Xbox, of course, wasted no time in pointing out that its ecosystem fully supports cross-play and progression across Fortnite versions. Larry Hryb ("Major Nelson") tweeted: "If you plan on playing @FortniteGame on your Switch here is how you connect your Xbox Live account to your Epic account. And your progression & items purchased in game on Xbox One will appear on your Switch after your accounts are connected."

Forbes' Paul Tassi has tweeted that the folks at Sony are blaming Epic for the lockout. GameDaily contacted Epic Games' PR team, which simply offered a "no comment." That said, it's been clear for some time that Epic Games is a strong advocate of cross-platform play. Epic CEO Tim Sweeney told Rolling Stone back in March, “I think it’s in everyone’s interest to support interoperability. Whatever the history, it’s really in gamers’ interest to play with all of their friends. Gamers who play with their friends spend more and are more engaged... That traditional divide between PlayStation and Xbox owners doesn’t need to be there.”

That divide makes even less sense when you're looking at Nintendo Switch and PlayStation 4. For many PS4 owners, the Switch is their second console, and it's the only console that lets players take a AAA gaming experience on the road. Making those Switch owners unhappy is tantamount to Sony shooting itself in the foot. This is a situation that is quickly spiraling out of control, but there's time to fix it.

PlayStation management needs to listen to the audience that made it so successful. Microsoft may be far behind in the "console wars" but the company did learn from its huge misstep with the "always-on" approach that first was introduced at Xbox One's launch. The company heard the feedback, issued an apology to its audience and proceeded to completely reverse its policy. Now it's time for Sony to do the same.

We've asked Sony for a statement on the matter, but have not received anything as of this writing. We'll be sure to let you know if we do.

[UPDATE] As expected, Fortnite on Switch is off to a red-hot start. According to Nintendo of America boss Reggie Fils-Aime, who spoke with Polygon, “Fortnite’s launch went extremely well — we had more than 2 million downloads in less than 24 hours." There's still no comment from Sony, however, and the longer their radio silence goes on, the worse it looks for them.