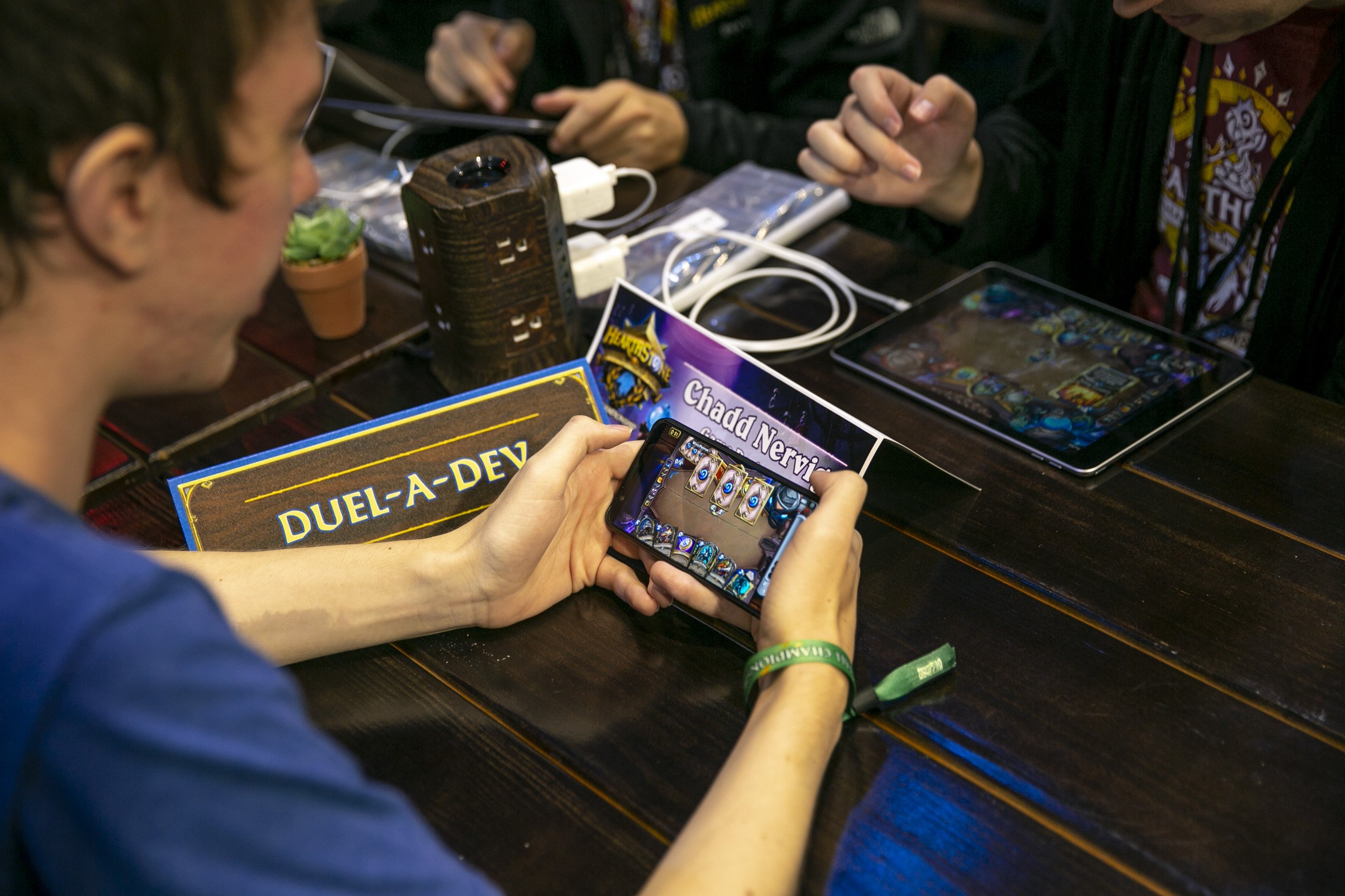 Former Blizzard Entertainment employee Jules Murillo-Cuellar opened up about his reason for leaving the company on Tuesday, citing ongoing issues with "racial abuse and discrimination" and ostracization from his employees during his final two years at Blizzard.

In a TwitLonger post shared to Twitter, Murillo-Cuellar opened up about his time working with the Hearthstone Esports Team on the Hearthstone Championship Tour. After earning a full-time position with the team, Murillo-Cuellar claims he was regularly kept out of meetings regarding key components of the Tour, despite working late nights and playing an important role in the team’s success, he notes.

During his time in the position, Murillo-Cuellar claims Blizzard employee Gemma Barreda-Mirkovic repeatedly made discriminatory jokes directed at his Mexican ethnicity, arguing he has a “natural inclination to be sexist" because he was born and raised in Mexico.

“The assumption then became that I was just like everyone else, and that my attitudes, beliefs were that of a Mexican machista (male chauvinist),” Murillo-Cuellar writes in his post. “The ‘jokes’ regarding my ‘machismo’ and me being Mexican would only become more frequent and finally culminate in the events that started my descent into literal madness.”

Over time, Murillo-Cuellar says that Barreda-Mirkovic’s abuse became so frequent and damaging that he reached out to Drew Higbee, then Associate Esports Manager at Blizzard. Higbee "assured me that he would talk with her, that she was going through life things, and that things would get better once we got more headcount and my workload reduced," but he claims "nothing was done" despite talking to Higbee.

By August 2016, Murillo-Cuellar says he was diagnosed with PTSD, noting that his doctor "was alarmed that my health had deteriorated so fast." In the post, Murillo-Cuellar claims he also experienced major depression, anxiety and panic attacks, nervous breakdowns, and suicidal thoughts from his time at Blizzard. His post culminates in a meeting with Murillo-Cuellar at the end of 2016 over his role with the Hearthstone Esports team, in which Barreda-Mirkovic reveals she would painstakingly manage Murillo-Cuellar.

“I was stunned because I was just finding out news that I had dreaded to find out: that [Barredaj-Mirkovic] would be responsible for my job while she despised me,” Murillo-Cuellar writes in the post. “I felt little, I felt worthless, and I simply stated, ‘I’m just finding this out and I just said what came into my mind…’ Realizing that I was clearly stunned, aghast, and fearing for my job she reeled it back in. She tried to compose herself, but the damage was done and I didn’t know what to do.”

While Murillo-Cuellar spoke to Blizzard HR Manager Paul Gemmell and opened up about the meeting, he wrote he struggled to tell him about "my brushes with her discrimination" as he felt "ashamed.” He claims harassment continued from Barreda-Mirkovic, culminating in a "medical leave of absence" after his health began "deteriorating at a startling rate" and he "posed a suicide risk." In the post, Murillo-Cuellar notes medical leaves are “not uncommon” at Blizzard.

“When I told this to [Che Chou, Hearthstone’s esports lead], during a walk, he would tell me that they would have to find a replacement for me—not what you want to hear—but it is illegal if it is within 90 days to find a replacement: my job needed to be there when I returned after my medical leave,” Murillo-Cuellar writes. “This would prompt another anxiety attack, ‘clarification,’ and an apology because this leave was work related.”

After returning, Murillo-Cuellar claims Phan became hostile toward him and his contributions were gradually diminished from the Hearthstone Esports Team’s successes. He began experiencing “several stomach issues” and gastrointestinal issues that led him to ER visits, and by October 2017, Murillo-Cuellar began experiencing nervous breakdowns at work. By December, he reached out to the Equal Employment Opportunity Commission but realized he lacked evidence and that "the statute of limitations regarding my racial discrimination and abuse" would jeopardize the case.

As a result, he initially planned to commit suicide in December 2017, but his wife ultimately prevented him from doing so. He resigned from Blizzard on February 2018. Nearly one year later, Murillo-Cuellar decided to open up about his story in light of Soldier: 76's coming out as a gay hero. He criticized Blizzard’s inclusive message, pointing out that both he and his wife experienced discrimination while at Blizzard.

“I write this today because the Soldier 76 announcement and subsequent tweets I did triggered me,” he writes in the post. “The reason why it triggered me wasn’t the message, but who it was coming from: Blizzard Entertainment. The idea of inclusion, of representation, and ‘every voice matters’ and ‘think globally’ never meant that for me and other people of color I have spoken to. Because up until recently—in the last 2 years—has the community had some representation and initiatives. But are we really represented?”

GameDaily.biz reached out to Blizzard Entertainment, Blizzard Diversity and Inclusion Leader Kelly Stevens, and Murillo-Cuellar for comment on the original TwitLonger post, but did not hear back as of this article’s publication. In a post from earlier today, Variety printed a request for comment from Blizzard that stresses the company has "a policy against harassment and discrimination" and that it "takes reports of inappropriate behavior very seriously."

“While the company does not comment on individual personnel issues, we can share that having an inclusive and respectful work environment is extremely important to us. We have a policy against harassment and discrimination and take reports of inappropriate behavior very seriously,” Blizzard told Variety in its official comment. “There are a number of methods for employees to come forward should they experience or observe any inappropriate behavior. All claims of alleged harassment and discrimination which are brought to our attention are investigated, and we take action where appropriate. We strive to create an inclusive and respectful work environment that reflects Blizzard’s core values in everything we do.”

“Employee and workplace health is also very important, and we offer different programs and opportunities that support employees, including health and wellness programs and counseling, both in the office (often provided for free) as well as through external professional providers,” the statement continues.

In his post, Murillo-Cuellar noted that “current and former alumni have confessed similar or worse treatment” at Blizzard with “nothing being done.” While speaking to GameDaily.biz, a developer close to almost a dozen past and present Blizzard employees claims content within the post mirrors experiences "from a lot of Blizzard employees,” and that they "know very few" Blizzard employees "who haven't taken a mental health leave." In one case, the source says ongoing stress from a position at Blizzard fractured one former employee's relationship with his fiancé.

That same source also notes that “at least” 15 different Blizzard employees past and present have complained about "internal promotion[s] and cliques" forming at the company, mirroring some of the patterns of favoritism described by Murillo-Cuellar. In one case, the source claimed they "personally" saw a situation in which being friends with a development lead was required in order to advance within a workplace. That source claims Blizzard employees would cite it as the reason "why they left."

“First of all, anybody that experiences anything we don't want to have happen, so if there is such a thing that occurs, we want to make sure that there's a lot of outlets for people,” Stevens said to GameDaily.biz. “So we encourage folks to talk with their manager [...] any manager, any HR person, really any people leader.”

While the behavior discussed in Murillo-Cuellar’s post is troubling, it doesn’t seem to be isolated at Blizzard. In August 2018, Kotaku reporter Cecilia D'Anastasio published an investigative report detailing sexual harassment inside League of Legends developer Riot Games' workplace. The story sparked an ongoing discussion regarding sexual harassment and emotional abuse within the games industry, one mirroring a larger conversation through the #MeToo hashtag.

As one employee argued, Riot has "grown very fast" and did not have a structure that "encourages diversity," causing Riot to struggle in "trying to fix that now."

In light of Murillo-Cuellar’s allegations, that report seems to suggest that fixing issues with discrimination may be a wider organizational problem companies in the games industry, one that goes well beyond one or two developers’ workplaces.