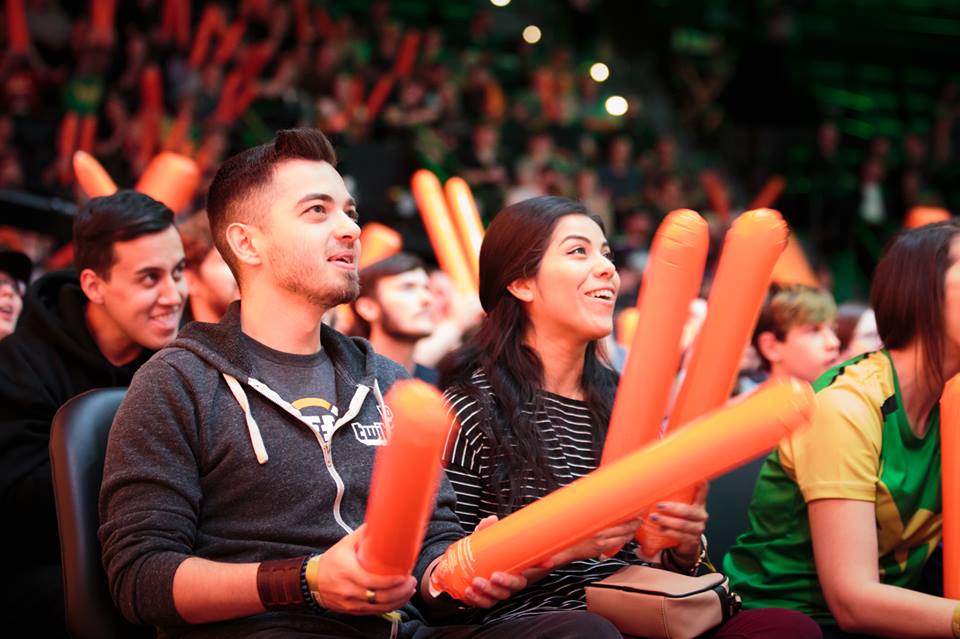 Esports has always been baffling to me. I recently sat in the front row of the inaugural Esports Activate conference in the Sony PlayStation Theater in Manhattan, bouncing my pen against my notebook, wondering what I'd gotten myself into. Friends and colleagues spent more and more time devouring Counter Strike: Global Assault and League Of Legends as I sat back and frowned in confusion. Watching someone else play a game competitively was a bizarre pastime in my eyes.

Competitive gaming isn't new, of course, nor are the broader strokes of esports. Who hasn't held a Soul Calibur (or Smash Bros.) tournament in their basement at some point? Basements and after school pickup games effectively fanned the flames for today’s grassroots esports teams. We can all reminisce about gaming competitions with our childhood friends, and it's that commonality that ESL North America's Chief Strategy Officer, Craig Levine, leans on when he talks about how we will see gamers warm up to esports.

I sat down with Levine during the Esports Activate conference in a quiet backstage room at the Sony Theater. As we sat there, swapping stories about gaming in our younger years and how much the landscape has changed, the conversation turned to how to bring esports to a more mainstream audience. The industry’s mission isn't about how to get your “Average Person” to enjoy watching a professional match of League Of Legends, which isn't a reasonable goal at the moment. Instead, it's about bridging the cavernous gap between niche and mainstream gaming.

"I think there's that common sort of culture underlying piece of community, playing with friends," Levine said, grinning. "I think that's where you can find the commonality [for esports], and then try to go around there. I think a lot of it comes from human interest and storytelling."

I'm still skeptical. As much as I love a good underdog-turned-champion story, it isn't as compelling as playing the game itself. (At least for me.) But the demographic that watches esports competitions  doesn’t necessarily watch to be entertained. Some watch to bask in the skill of elite gamers, knowing what goes into those split-second decisions in the middle of a match. Others watch with their friends in the same way that traditional sports fans watch the Superbowl or Stanley Cup together — connection is key for esports communities. And still others watch esports to learn strategies and techniques to hone their own game, whether competitive or casual.

During the "What Is Esports? Why Is It Hot?" panel at Esports Activate, the panelists, including the COO of Hi-Rez Studios, Todd Harris, and the VP of Global Interactive Marketing at Skydance Media, Guy Constantini, discussed how the "focus has started to shift on the 'watchable' component [of esports] towards entertaining the viewers."

Unlike watching traditional sports on ESPN, where viewers are passive, watching esports is "the most interactive experience a viewer can get, short of playing the game."

"They're in Twitch chat, playing a game of their own, and in Discord with their buddies all at the same time," Ryan Musselman, President of OpTic Gaming, said during the panel. "They're not just sitting there."

"You've got interesting things like Caffeine TV now [too]," Levine added during our conversation. "They create your viewing experience in a more curated social circle, than 200,000 people, whatever, spamming whatever, might be a Twitch chat."

The younger generations that grew up with gaming have the easiest time melting into the trappings of esports, including the fandoms that are built around the teams and the players. They're "always on" and they're hungry to connect with their favorite players. "Fandoms drive the live events," Levine said during the panel.

The numbers don't lie. Intel Extreme Masters (IEM) saw 173,000 people at last year's event in Katowice, Poland. Dreamhack events  had 220,000 people in attendance worldwide. Last year's League of Legends World Championship finals were held at the Beijing National Stadium, packing in almost 91,000 people for the last match of the season.  These attendance numbers are staggering for in-person events, but the online engagement is even more astounding. At its peak, that same tournament had over 106 million people watching the broadcast from around the world.

The real measure of how mainstream esports is, however, is how it sits with the parents of young gamers. Ann Hand, CEO of Super League Gaming, works with children and teens, as well as their parents, on competitive gaming in Minecraft and League Of Legends. And while their aspiration is to become a feeder system for the pro leagues, Hand loves the stories that parents tell her after a city event.

"It's kind of neat to see parents feel like they can really get engaged through Super League around these games that kids love," Hand said during our conversation at Esports Activate. "A really common theme for parents is, 'Look, I know [they] love this game, but I can't stand over their shoulder in their bedroom and watch them play. It's too intrusive.' When they put on their city jersey though, it's game day.

"Just like with Little League, you don't go to your son or daughter's practice, but when they put their uniform on, that's the day that family members get to go and watch. As kids put on their jerseys and come to our events, we've found that most parents stay and watch, and they kind of cheer from the sidelines. Then they say, very consistently, 'Now I get it. Now I get why he or she loves it so much. Now you've given us a way to go home and talk about it at the dinner table.' Parents have asked us for classes on how [they] can learn the game a little better so they can try to play together more as a family."

It isn't just about the competition for Super League events, either. Part of it is making sure that the events are inclusive for all children. "Right now I'd say we probably have a split of about 35% girls, 65% boys, which we're really happy about," Hand said. "We hope to continue to see those numbers continue to grow, because that's how many girls are wanting to play online. A lot of times we find that when we talk to our girls at our events, they say, playing online, it's too intimidating or intense. Because they're sitting there with friends, people in real life are much nicer than they are online. Games should be an ultimate equalizer."

But, as we know from watching Overwatch League struggle to find female talent for their franchise leagues (and finally found one in Kim "Geguri" Se-Yeon), it isn't as simple as treating gaming as equal from the outset. Educating players on social issues and cultivating an inclusive atmosphere in tournaments are two important pieces that Levine and ESL are aiming for within their organization.

Representation matters not just for players, but for the audience, too. During the "Women in Esports and Video Games" panel at Esports Activate, moderator Sarah DaVanzo, VP of Consumer & Market Insight & Foresight at L'Oreal, reminded us that women make up 42 percent of all gamers in the United States, as of 2017. Women want to look at a broadcast, or a stage, and see ourselves in equal representation with the men. It's not enough to start "women's leagues," Emily Sun, co-founder of Smash Sisters, said during the panel.

"In fact, it's not a good idea to further segregate women from men in esports,” she stressed. “That's not where true inclusion lives. The goal should be to create more visible women in esports in order to normalize our existence."

Diversity and representation in esports in all levels of competition is an important marker of how much the industry has grown over the last decade. The vast majority of competitors in games like League Of Legends continues to skew towards men, but girls and women aren't slowing down. True equality may be years and years away at this point, especially as female gamers shrug off talk of "affirmative action" in esports, but seeing those once cavernous gaps shrink even a little is heartening for old-school gamers like me.

Competitive gaming and their pursuant fandoms aren't going away. It's no longer a niche avenue of the gaming world. The esports viewership trend will most likely continue upward, as it climbed 11.8 percent over the last 5 years among viewers over the age of 18, according to Musselman's presentation at Esports Activate. And the more esports moves toward traditional sports investments and franchises, the quicker we'll see the end of the "Wild West" of esports.

Bridging the gap to mainstream audiences is in the stars for esports leagues, but they'll first need to find a way to bring in a more mainstream gamer audience. Continuing to work toward educating parents, building diverse and inclusive spaces, and making esports a more approachable entertainment model are the first steps among many.

"[Esports] is still this piece of wet clay that's being figured out, and I don't think there's going to be one model that rules them all," Levine mused, when asked about the future of the industry. "I think every game in every community is different, and there could be a different framework in place that serves them."