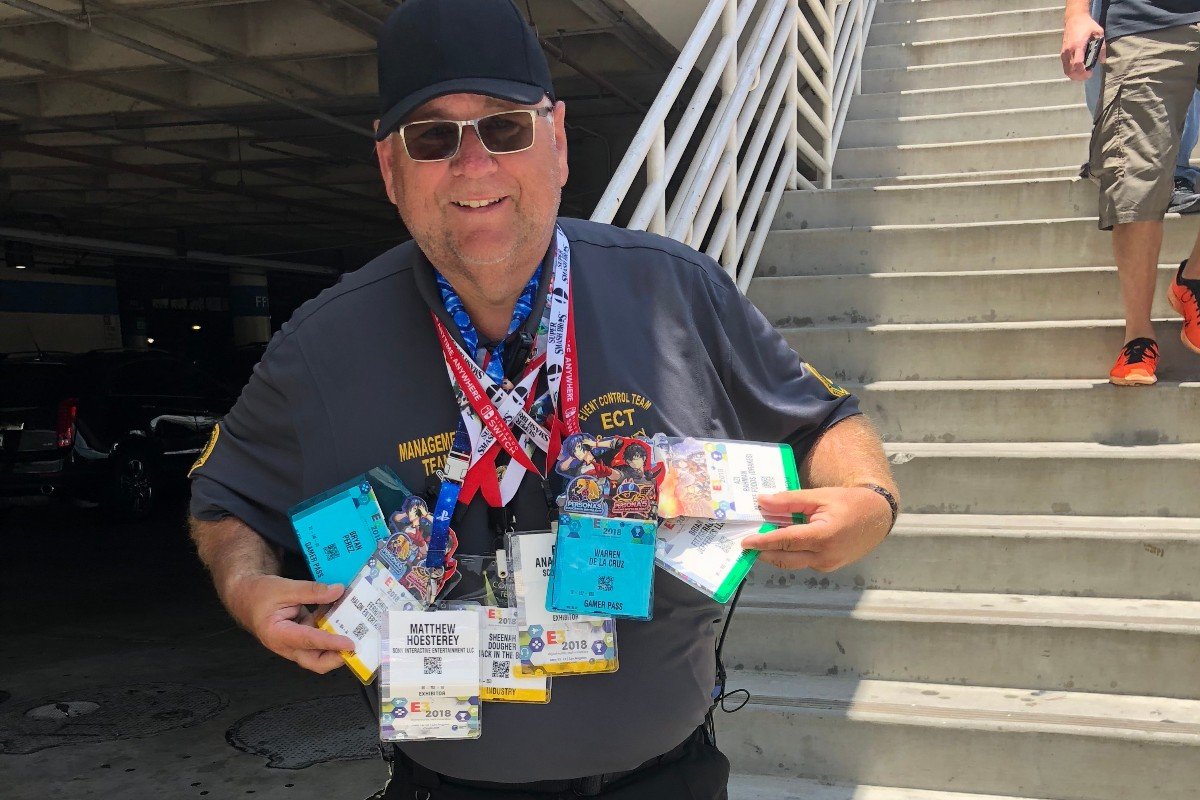 E3 2018 has officially come to a close, and this year's show had some of the tightest security measures we've seen. Metal detectors were in full effect, all bags were being checked, and once inside, every individual's badge was scanned when entering South or West Hall (or in my case at times, the media room). There were more security members roaming the floors of the Los Angeles Convention Center than we've ever seen, and we even spotted some dogs being used to sniff for explosives.

That's all well and good. Security is incredibly important, and while it may seem like a minor (or sometimes major) inconvenience, it's unfortunately necessary in this day and age. The extra measures also revealed a problem that's problably gone on for years but is now coming to light: industry badges being sold to the public.

Out of the blue, and with no warning that this would be taking place, when I tried to get into E3 this morning, I was asked for my ID. This did not happen on Day 1 or Day 2. Why did it happen on Day 3? Clearly, a number of folks got what they wanted from the show and decided to make a little profit by unscrupulously selling their badge.

The concept of ticket scalping is nothing new and happens at sporting and entertainment events all the time. But what's more shocking is that numerous industry and exhibitor passes were confiscated as well.

One look at Craigslist, and we came across a number of ads for the badges. Some even were posted several days ago, advertising access for the entire three days of E3: "3 industry guest badge ticket passes for sale for E3. Available for confidential Pick up tomorrow morning around 11:30am at convention in downtown LA. 500 each obo (discount if you buy all 3) Industry access has earlier entrance than gamer passes. Tickets are normally $995+ for 3 day pass."

When GameDaily asked the Entertainment Software Association for comment on the badge sale issue, we were directed to the ESA's attendee policy page, which states: "The E3 badge is non-transferable and is the property of E3 Show Management. E3 badge swapping and/or sharing is strictly prohibited. Any attendee found using another attendee’s badge will have the badge confiscated and will be removed from the premises. The E3 badge must be worn at all times."

The security guard from the events team we spoke to had a veritable cornucopia of badges around his neck. He said he had to confiscate 155 of these badges in one day, and it's unclear how many others on the event management team had to do the same. There were 15,000 gamers at this year's E3, and it's not shocking that some consumers might want to make some money back by reselling their badges for Day 3. The concept of ticket scalping is nothing new and happens at sporting and entertainment events all the time. But what's more shocking is that numerous industry and exhibitor passes were confiscated as well.

One look at our security friend above reveals an exhibitor badge from Sony (among others). That means that this individual either tried to share the badge with a friend or, worse yet, sell it to the public. It's not a great look for Sony in a week that's seen them already take all kinds of heat for the Fortnite controversy. I get that Sony is a behemoth company and this person may have just been a contractor working on the exhibit.

Regardless, anyone connected to the industry who was caught trying to share or sell their badge is not going to look good. Perhaps next year we'll have to show our IDs for all three days of E3. It's also unclear what measures the ESA will be taking with the companies or individuals who sold their badges. Will these folks be allowed back in for the 2019 show?

The other unfortunate effect of the sudden ID checking on Day 3 is that some people don't carry their driver's license or passport everywhere they go. It's possible some people were turned away as a result. Worse yet, thanks to some horrible federal and state-by-state policies it's not always easy for transgender people to get the identification they want, and if they carry an older document it might not even match what's on their E3 badge.

Day 3 of E3 2018 definitely felt lighter in terms of foot traffic, no doubt a partial result of the badge situation. The show floor at times almost looked empty, depending on where you were in South or West Hall. Each year, the ESA is evaluating and learning from the show, so the badge resale issue is one of those things that needs to be scrutinized. We'll be taking another look at E3 2018 from the consumer viewpoint as well. Stay tuned!

E3 2021 dates confirmed by The ESA, but questions linger

Thanks to a perfect storm of complications, the state of E3 remains in question. [UPDATED]

Analysts weigh in on the flagging relevance of the show as coronavirus fears spark cancellation speculation. [UPDATE: Now SXSW has been cancelled]

The organization has still not apologized for last year's data breach, but that's not stopping it from attempting to revitalize the once-preeminent event.