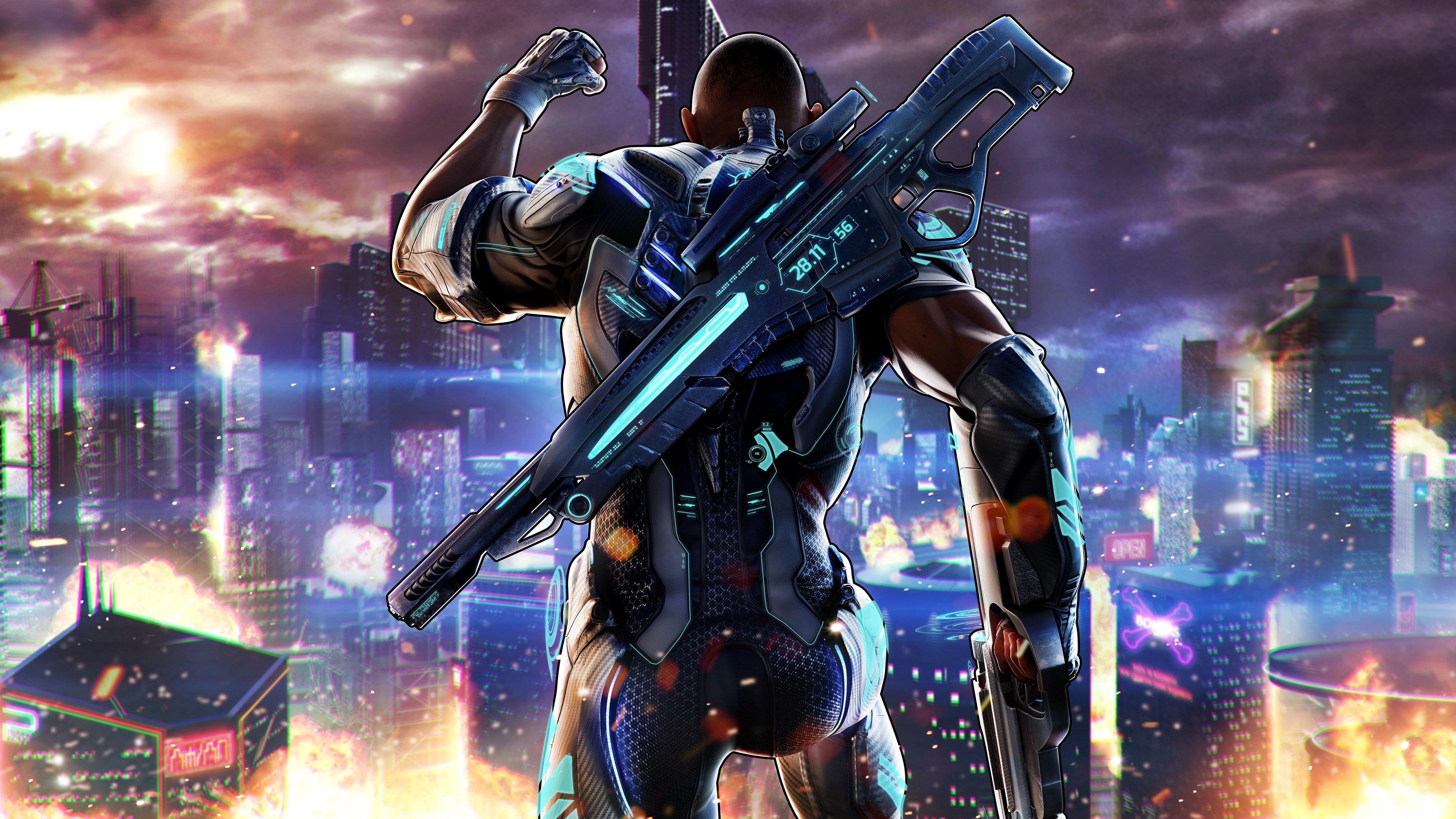 A little under five years since it was first announced at E3 2014, Crackdown 3 is finally here. What may have felt like an excuse to pick up the first Crackdown just for the multiplayer beta of Halo 3, the original was actually something that felt fresh, energetic, and a ton of fun.

2010’s Crackdown 2, made by Ruffian Games, was not as well received as the first game, only getting an 70 on Metacritic (CD1 got an 83). Now, nine years later, Sumo Digital takes up the mantle for Crackdown 3, which itself has gone through many changes during the course of its development.

Reviews so far have been mixed, but as of writing, its MetaCritic score is currently ten points lower than what Crackdown 2 was. One review noted that in an era where the open-world genre has evolved in the time since it was first announced in 2014 - we’re thinking your Red Dead Redemption 2s and Witcher 3s and possibly even GTA 5's despite releasing in 2013 - Crackdown 3 has arrived too late for the shindig.

Despite that, Crackdown 3 is still fully intent on having a good time.

“Crackdown 3 is, arguably, five years late to its own party, arriving to find that everyone is already leaving, the DJ is bladdered and there’re no sausage rolls left,” said God is a Geek’s Mick Fraser in his review, scoring it a 7.5 out of 10.

“The weird thing is that it doesn’t seem to care, and is instead stubbornly insistent on making its own fun, cranking the music back up and dancing like there’s no tomorrow.”

But Geek.com’s review by Jordan Minor cited the game in the article’s title as a Terry Crews simulator. And considering how the promotion of the game since around 2017 has centered around him being arguably one of its selling points, it’s not hard to see why.

“When you first start up Crackdown 3, a huge man waits in the shadow. And then, he emerges, a hyper-accurate video game recreation of Terry Crews,” said Minor in his unscored review. “It feels like a thesis statement. Over the years of Crackdown 3’s troubled development, Terry Crews’s actual involvement has always seemed like an open question.

“But fear not, fans of Old Spice and Brooklyn 99. Crews is definitely here. Watch him give a badass speech and dance a little. Gasp when he blows up. And smash that “A” button to choose him as your playable character for the rest of the game.

“Terry Crews is great and he brings precisely the right energy to a game that probably should’ve come out a few years ago. Cruise with Crews in Crackdown 3 though and you’ll still have a good time.”

Admittedly, Crews has been a fine ambassador for the game, appearing in funny trailers, doing skits, and more. There isn’t anyone who’s been watching the marketing campaign for Crackdown 3 who doesn’t love his passion and enthusiasm for it, not only in promoting it, but for his role in the actual game itself as Commander Jaxon.

“Crackdown 3 is a game in which, as Terry Crews, you punch cars to death,” said Nic Ruben in his review for VG247.

“When they explode, Terry Crews goes up in flames, gets thrown back a few feet, then punches another car out of anger. Later on, Terry Crews becomes so powerful that he can pick cars up and throw them over buildings. Do the cars sometimes have innocent people in them? Shut your mouth. Terry Crews has a city to save.”

To paraphrase that Brooklyn Nine-Nine saying, “Terry loves Crackdown.” And we love Terry. But Crackdown 3, going by how much it uses him throughout the game - or lack thereof - may not love him back.

“Crackdown 3’s story is never more complex than, to paraphrase, “Oh no! Evil megacorp Terra Nova has sucked out the world’s power and you must stop it!,” said Brandin Tyrrel in his review-in-progress for IGN, currently giving it a score of 5.0 out of 10.

“It’s so thin that even a talented personality like Terry Crews can’t save it, especially when his infectiously energetic and hammy performance as Commander Jaxon is mostly confined to the opening cutscene and then some random bits of dialogue before he’s reduced to effectively just a skin for your character with his own bonuses, like all other agents.”

And in his three-star review for GamesRadar, Jordan Oloman said that Crews and his character “is sorely underutilized in the main game beyond pure aesthetic value.”

He added: “Think of Jaxon like a Terry Crews action figure with an automatic drawstring. Perhaps this was a commitment to the voiceless protagonists that have headlined prior Crackdown games, but in a world of Arthur Morgans and Kassandras, perhaps giving the player character some personality would have been useful in showing that this is a new and improved Crackdown game, and not just a souped-up reskin of what worked last time.”

Because of the amount of time Crackdown 3 has spent in development, and even in the time since the first Crackdown released 12 years ago, some of the game’s design philosophies feel outdated, a point brought up in a lot of reviews.

“The original Crackdown (2007) had a novel formula that worked in the early days of the Xbox 360,” said Brett Makedonski in his 6 out of 10 review for Destructoid.

“It set the player loose on an untethered destruction spree, free to dismantle a spiderweb of criminal gangs in any particular order. Of note, it also liberally implemented all the most notorious open-world tropes before they became a designer's punchline. Crackdown 2 did the same but with zombies; it wasn't cute.

“Crackdown 3 does its best to push the series forward -- and succeeds in some ways -- but can't shake the dated design that keeps it anchored down.”

“Crackdown 3 feels like a remnant from another console-era, a time in which open-world games were still a novelty,” added Christopher Byrd in his unscored review for the Washington Post, adding: “The shooting, driving, and traversal mechanics arefine and the firefights are generally well-balanced, but these aspects don’t add up to anything particularly rousing.”

And noted Colin Campbell in his unscored review for Polygon: "In its most spectacular moments, Crackdown 3 pirouettes and arabesques in a joyful dance of comic destruction. It’s a Broadway-style big number, in which the stage crackles with graceful hyper-violence. Bodies fly. Trucks explode. Chemical installations shatter. It is a wonder to behold.

“But then, the illusion fizzles into humdrummery. The stage is suddenly emptied, save for a man with a broom. We wait a while. Eventually, the players return, and with them, the magic.”

Crackdown 3 is split into two modes: campaign which includes a co-op mode with a fellow buddy, although as pointed out by Keza MacDonald in Kotaku’s review - MacDonald also has another review for the game on The Guardian, giving it a 3/5 - and by Sam Chandler in his review for Shacknews (disclosure: Greenlit Content, who also owns GameDaily.biz, counts Shacknews among its clients), it’s severely flawed for not properly explaining its file save system when beginning co-op with a friend and thus potentially leading to the loss of your save file.

The other is Wrecking Zone, a ten-player, five-on-five multiplayer suite in which full on carnage ensues with the world open to near-full destruction, something that was an original selling point of the game across both single-player and multiplayer thanks to Microsoft’s cloud computing system. For single-player, it was never truly realised and dumped from the game. And even in Wrecking Zone, though it’s impressive, the tech feels hard done by with a multiplayer that doesn’t do it justice.

“The new technology Microsoft has implemented - and the core focus behind the Wrecking Zone - is awesome,” said Oloman in his GamesRadar review. “Buildings crumble in intense detail, you can explode floors to make enemies fall through, you truly do come in like a wrecking ball. But it would be so much better in a game like say, Battlefield.

“Using this technology in such a mundane multiplayer experience feels like an absolute waste. It feels like something that would have impressed at the start of this console generation, but fails to entice now. If you are going to pick up Crackdown 3, don’t waste your time with Wrecking Zone.”

Added MacDonald in her Kotaku review: “Sure, you can blow up bridges and buildings thanks to The Cloud, but what’s the point?”

As a $60 game, a full-price purchase of the game doesn’t sound justified going by the reviews we’ve read. But this is where the advantage of being a subscriber of Xbox Game Pass comes in, letting you play it as a member of the service from the day it’s available - as with all first-party Microsoft games - and it’s from there that it might be worth looking into.

“Crackdown 3 is ultimately the tale of two price points. At $60, it's pretty difficult to recommend,” noted Jez Corden in his 3/5 review for Windows Central. “The content spread just isn't there, there are other games available now or very soon that will probably be a far better investment.

“However, Xbox Game Pass completely changes the argument. As a $10 payment for a month's worth of access, Crackdown 3 is some decent mindless fun, tossing tanks into the sky, spraying rockets across the map, or punching dudes into buildings. Wrecking Zone is also worth a look, if for no reason other than the impressive destruction mechanics.”

“Sure, you can collect every orb and max out your agent, or ramp up the difficulty and run the gauntlet again in co-op, but at the end of the day, it’s a question of value, and whether you can stomach that amount of content for the full price ticket,” ended Oloman’s GamesRadar review.

“Yet, if you’ve got Xbox Game Pass, it’s easy to recommend. It’s daft, polished fun, even if it doesn’t push the boat out like it should.”

“...if you’ve got Game Pass or plan on getting it, and you’re up for a few evenings of uncomplicated video game-ass video game fun, it’s absolutely worth the download, no question,” added Ruben’s review for VG247.

“It genuinely feels like it was made by people who love and understand what made the original game such a cult hit. If the troubled development cycle is evident, then it’s in the limitations of scope and polish, rather than heart or quality.”