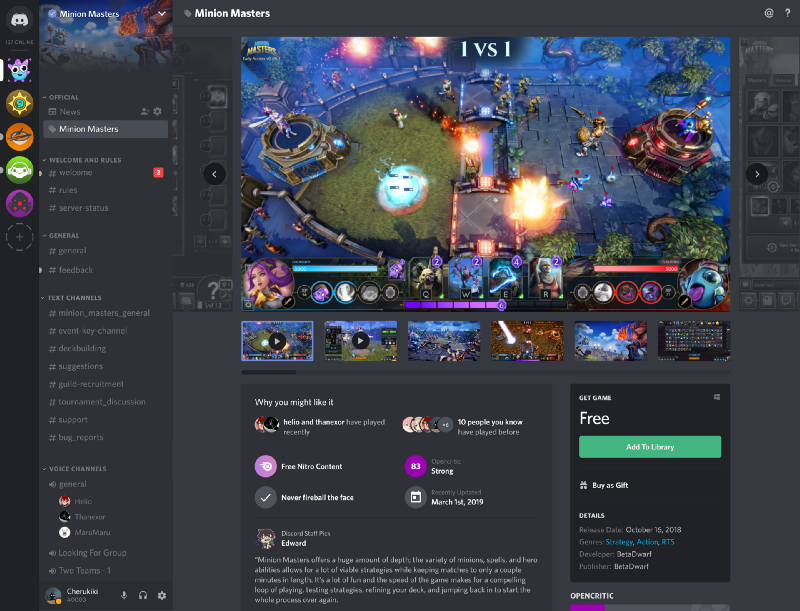 Since launching the Discord Game Store in October 2018, the chat company has been clear that it's looking to continuously improve the storefront and service for both developers and consumers. Discord has announced that it will be making changes to the way verified servers work, which will integrate extended tools for developers to sell their games directly to their communities.

In a blog post, Discord elaborated on what that will mean for developers' verified servers: "For a small development fee, devs will have access to store channels and news channels. Once approved, they’ll receive a verified checkmark, get vanity perks, and appear in server discovery." Discord's "small development fee" will be on top of their fairly generous revenue share model at 90/10, in favor of developers.

The "store channel" will allow members of the server to purchase the game directly from the server itself. While this doesn't solve the overall discoverability concerns that developers have voiced about the user experience of the Discord Game Store, it allows direct access to product for fans exactly where they are. The forward-facing storefront, which sits in every Discord user's personal landing page, is a good catch-all for algorithmic discovery, but allowing verified servers to opt in for "premium" discovery may prove to be more effective for developers, depending on the fee.

Additionally, Discord will be peeling back the a layer of data to give developers a more in-depth look at their server's analytics, including revenue breakdown charts and user acquisition.

Discord announced in November that it was going to be allowing developers to release games in early access with the Discord Game Store. The original early access pilot had five games available in the storefront. Now that Discord is opening up the floor to verified server developers, individual developers will be able to launch their early access games into their communities for feedback. This development cycle that "loops in" the community as part of the process has been integral for smaller developers to better understand what people want from their games. Discord has now taken a potential layer of complexity away by giving developers the option to build, communicate, improve, and sell right where their established fan base is.

There are also "vanity" improvements that verified servers will have access to, including custom Discord URLs, the ability to upload unique art to represent the server, and… gifts! "Fans [will be able to] drop click-to-redeem gift links" for anyone, anywhere on the internet (not just on Discord), somewhat similar to Steam's gifting, but without the obnoxious need to be "Steam friends" first.

Discord is clearly committed to removing friction between developers, their communities, and the games that they're building. The integration of early access, premium server discoverability, commerce (for when the game is ready), improved analytics, and little quality-of-life upgrades for developers and users alike will provide developers with better tools to integrate their communities with their business models in a sustainable capacity.