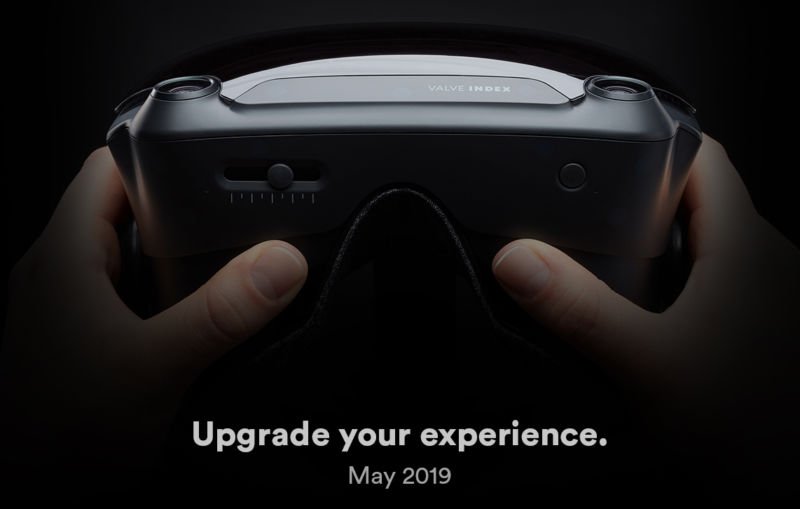 Update: PC Gamer has confirmed that the Index will indeed ship in June, as per the unfinished site tweeted out by Steam Database.

The virtual reality arena is about to get a bit more crowded as Valve prepares to step into the ring. A teaser site, first noticed by Ars Technica on Friday, confirmed the existence of the long-rumored headset, now dubbed the Index, with a promise of more details to come in May. The announcement caps of months of images and hearsay about Valve’s VR efforts that have been floating around since late last year.

Although no official release date has been announced, perennial insider Wario64 suggested on Twitter that it could be as early as June 15. This speculation comes from an alleged unfinished Index website found by Steam Database on Twitter.

Valve, who previously helped HTC design the Vive headset, is entering into a fairly indifferent VR market. According to VR analytics group Digi-Capital, 2018 saw a bit of a slump for the install base thanks to phone manufacturers largely abandoning VR-bundled phone packages and device attrition rates. The slump may have also be in additon to Oculus announcing a Spring 2019 launch for its Quest headset, as opposed to a late 2018 launch.

“VR revenue comes primarily from entertainment, and is driven by premium/standalone VR more than mobile/standalone VR due to installed bases and unit economics,” Digi-Capital’s managing director Tim Merel wrote in a January blog post. “VR could return to modest growth this year, and remain dominated by hardware and games revenues. The second generation of premium standalone VR headsets (not those launching this year) could become a catalyst in the 2020/2021 timeframe. For this to happen, [headsets] will need to deliver greater performance and better content at lower prices. Hopefully by [2020] we could also see VR platform holders simplify their product ranges from their current platform fragmentation.”

While the VR installed base struggled in 2018, investment dollars in the overall AR/VR/computer vision market during Q4 saw a bit of an uptick compared to the previous quarter. Overall investments returned to an average quarterly level. Investment capital in VR startups was mostly down during the majority of 2018. In another blog post from January, Merel wrote that the next six months will be crucial for the VR industry.

“There has been a gradual decline in overall AR/VR deal volumes in the last two years, with the most recent high well over 100 deals in Q4 2017,” Merel wrote. “The stages which have seen the most variance are pre-seed and seed deals. Q4 2018 saw an uptick to approach 80 deals, although again pre-seed was somewhat limited.”

According to Digi-Capital’s report, roughly $6 billion was invested in AR/VR/computer vision startups last year. “The scale of deals in the Chinese market has been particularly impressive over the last 12 months,” Merel said. “There was...significant investment with Chinese companies in AR advertising, lifestyle and smartglasses categories completing $100 million-plus deals.”

From GameDaily's understanding, if Valve wants to make an impact in the VR field, it’s going to have to shake off its somewhat insubstantial history with gaming hardware.

“Valve’s hardware track record is a mixed bag when you consider things like the discontinuation of the Steam Link and removal of Steam Machine PCs from the platform’s homepage,” Carter Rogers, principal analyst at SuperData told GameDaily. “It’s unlikely the Index (or any PC VR headset) can become a true ‘mass market’ device, but it does have the potential to carve out a share of the PC VR market with the right price and specs.”

Although consumer uptake has been admittedly slow, Rogers said, the industry is seeing a shift in focus towards VR by hardware and software makers, especially as demand for training software increases. SuperData predicts that the next several years will present a substantial rise in VR revenue, and estimates an industry valued at around $35 billion by 2025.

Still, there’s a long way to go yet, and it’s unknown if the Index will be the knight in shining armor that VR has been looking for. Rogers noted that there are many hurdles Valve must overcome, including setting itself apart from the VR pack.

“Due to hardware revisions like Vive Pro and upcoming Rift S, the Index headset itself will likely offer, at most, incremental improvements over existing devices,” Rogers said. “Content also won’t set the index apart. Valve said two years ago that they were working on several VR games, but any potential titles that do see the light of day will almost certainly work on existing headsets.”

Whatever the future for VR holds, expect more details on the Index next month.