Trover Saves The Universe: How Rick & Morty's Justin Roiland Kills His Darlings To Find The Joy 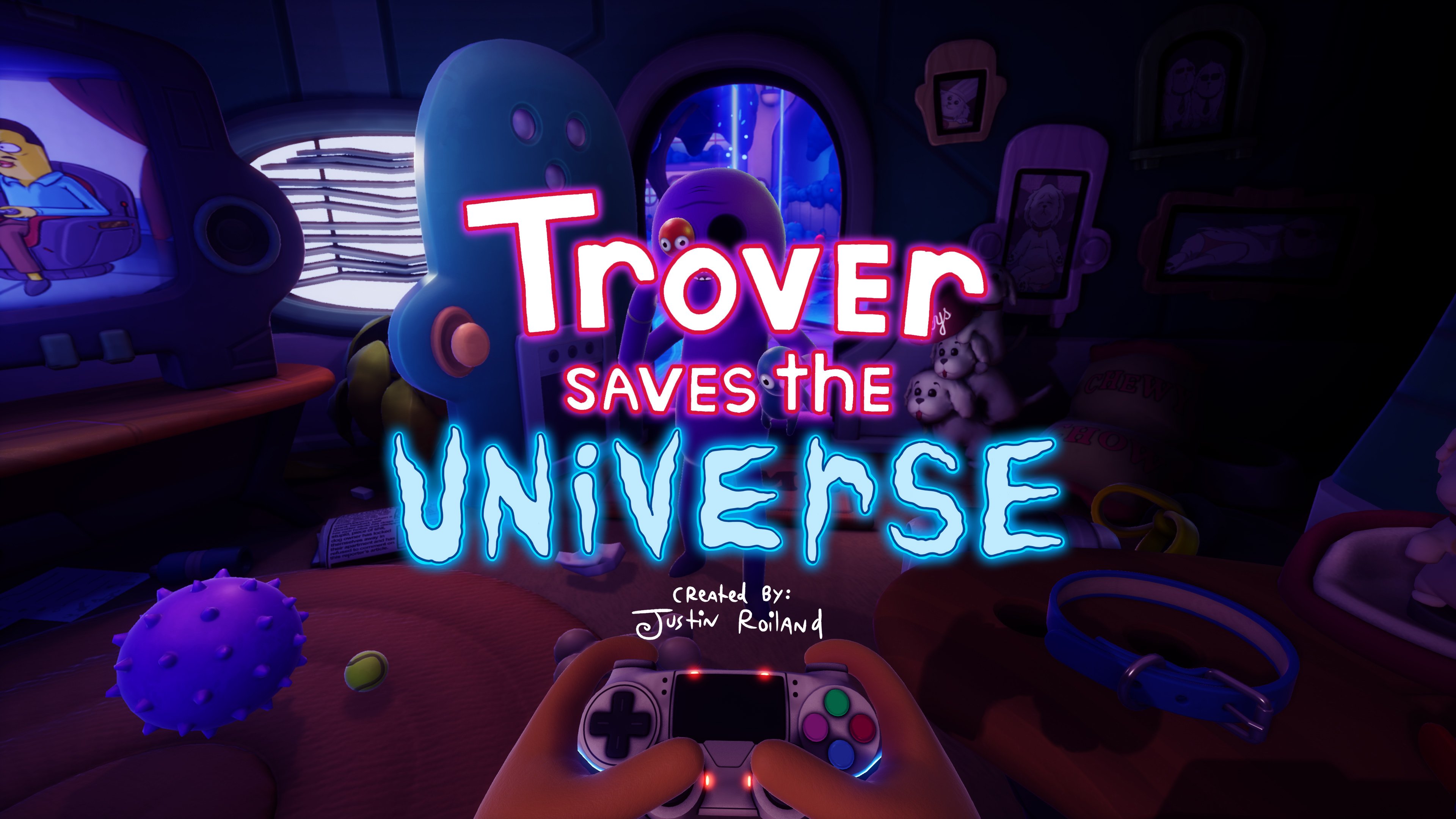 Squanch Games’ Trover Saves the Universe was the most dangerous appointment I took during all of PAX East.

On day two of the show, I got sick (because PAX Pox, of course). My cough was bad enough that any sudden movement to my diaphragm was enough to induce a minutes-long fit. And laughter? Well… that just made me hurt, making Trover an exercise in humor-based masochism.

The VR demo (it’s playable on PlayStation VR and as a traditional flat-screen game) was brief, introducing players to the game’s tutorial in about 10 minutes. Players take on the role of a Chairorpian, bound to a floating chair like one of Wall-E’s rotund cruise ship guests. Trover, the titular hero voiced by Justin Roiland, founder of Squanch Games and co-creator of Adult Swim’s Rick & Morty serves as the player’s agent in the world.

The effect is similar to Adventure Time: Magic Man’s Head Games in that the player’s “character” is rooted in the world through narrative construction, but ultimately an observer except in dialog. In VR, players nod their head to signal an affirmative response and shake it to indicate the opposite. Outside of conversation, Trover is the real star, chatting to move the story forward and fighting enemies with a laser sword. Controlling both the Chairorpian “self” and Trover sells the immersion within moments of the latter bursting through the door to begin the adventure.

Spoiling even the tutorial for Squanch’s debut outing would rob you of some of the magic, but it’s safe to say that Roiland has successfully transitioned from television to games. There was a learning curve, though. He spoke to GameDaily about building his studio alongside co-founder Tanya Watson, making the transition into the game industry, and the similarities and differences between the two mediums.

“[They’re] similar in the early days structurally,” Roiland explained. “Your foundation is a really, really solid story that has curvature to it to some degree. But then the scoping starts pretty early on. The first script for Trover was probably a 30-hour plus game, and I didn't realize it at the time. We had our vertical slice and it was sort of like okay, we’ll start cross referencing that vertical slice and how long it takes to get through that for about an hour against the game with all these levels all the stuff you’ve got, all these moments you want to do and that's about 30 plus hours.

“We've had to tweak episodes of Rick and Morty, but it's usually in the scripts. It was never like this. TV is very passive. Here, you're making something that people can reach in and fuck with at every point of the way. So as a team, we really want every time a player can do [something], we want to have a response. If there's a 'this' then there's gotta be a 'that.'

"If we can blow someone's mind a couple of times throughout the course of the game we will. I said once it's like writing a TV show that someone can kinda go inside of and start messing around with and poking around and you need to have the characters acknowledge that that's happening. It gets really weird if you were to do that and everyone was just kinda still on their rails, doing their thing, and not acknowledging that someone’s in the house knocking shit over.”

In television and film, Roiland and Rick and Morty co-creator Dan Harmon get a lot of latitude. There’s rarely pushback, with executives embracing even the “big, crazy, insane” ideas.

“Dan and I have sort of grown accustomed to the incredible team we have, the talent we have on the show and the fact that it's a passive medium you can sit and watch,” Roiland said. “We always figure out very creative ways. But because it's a shot and not a [game] level… it's very easy to go in and tweak. If we pitch a story that sounds insane, like a movie, it would cost hundreds of millions of dollars. The network, everybody's on board. We pull it off because the team is so damn dedicated and talented and just believes in it. So, going into games, that was sort of one of the things that I realized.”

Roiland is not uncomfortable killing his darlings. He and his writing partner on Trover, Spencer McCurnin, along with narrative editor Anthony Bosco would churn out jokes on paper. Sometimes they would pump out as many as 100 to see what would stick. It wasn’t until Roiland stepped into the recording booth that the team would know what works and what doesn’t.

If something wasn’t funny, it was cut.

“I try to embrace as much possible joy, just absolute pure joy, have as much fun as possible and make myself laugh, and make the team laugh,” Roiland said. “That was the North Star for me throughout this process: have fun. As soon as it feels like we're sweating something and we're working hard and we're not really sure… there's a level that we did that and we got it up and we played it and it wasn't funny. I was like, ‘Fuck this.’ There's levels we rewrote multiple times until we got it loose and funny and really, really feeling unique and crazy.”

The short life and untimely death of Squanchtendo

Before it was Squanch Games, Roiland and Watson launched the studio as Squanchtendo. The homage-laden name was amusing, but legal counsel was concerned that Nintendo might be unhappy with the similarity. An abundance of precaution led to the name change.

“Nintendo never, I think, knew we existed,” Roiland explained. “I loved the name. It's such a great name: Squanchtendo. It's so funny. At a certain point down the road our counsel advised us it might be a good idea to change our name before we launch or ship anything. They're pretty litigious. They might have a case here. Confusion in the market or who knows.

“We did it out of respect, because I'm just a big Nintendo fan. That was my first console, a Nintendo. I fucking love everything they’ve made. I've been the biggest handheld gamer my entire life and it's Nintendo all the way. For handheld gaming, there's no competition really. The Switch is like a god console. I've very much adopted to the Nintendo game design philosophy and all the things they did so well. We want to do that. We want to emulate that but obviously we're very filthy and they're not. We're skewing to a very different demographic, but we changed it because we didn't want to piss them off.”

Unlike Nintendo, which opts to hire additional contractors rather than have employees put in excessive work hours, crunch was part of Trover Saves the Universe’s development. Roiland hopes that isn’t something the company will repeat in the future.

“They don't crunch. They do not crunch. We did,” he said. “We have some crunch and ideally, we would get to the point where we don't have to do that. They get that luxury. When you're the hardware, you hold the keys to the kingdom and your games are as good as they are. I think they learned it comes out when it's ready and it's perfect.”

Roiland has adopted the “ready when it’s ready” philosophy, and has a good idea of how he wants Squanch to manage its staff and development process moving forward. He and Watson expect to use revenue from Trover Saves the Universe to support a staggered scope with smaller projects weaving in with the larger ones.

“At Squanch, we want to sort of employ a thing where we have both relatively smaller, shorter game experiences that have a much shorter dev cycle that we can ship while we are making the big crazy thing that no one knows about for however many years,” Roiland explained. “We kinda did that with Trover, but now we're really poised to do it. We learned. We saw how to do it right and how not to do it. Now, going into our next thing that people won't know about for a long time, we want to also be doing smaller things that we're shipping regularly. So we're making these fun, smaller scope neat little things that we're putting out and we can only do that if [Trover] sells well essentially and we actually have a little bit of revenue to R&D some fun little small weird games on the side of our big thing.”

Squanch Games currently employs approximately 30 staff across two locations: Raleigh, North Carolina and Burbank, California. The studio began with a focus exclusively on VR, but midway through development of Trover Saves the Universe, Roiland and Watson realized they were able to cast a larger net.

“I noticed a lot of the team would pull the build up on their PC monitor and they're just playing using a controller and not in VR,” Roiland said. “I would see it and I was like if we tweak the field of view a bit. If we did this and that, change the controls a little bit... this could work on a TV. This could be a way to play the game. We started prototyping it and we kept iterating on it until we eventually landed on this amazing version that plays very fluently just on a flat screen TV. Then we were really excited. We were like, “Now we can do shit! Now we can ship the game as a regular game.”

Even though you’ll be able to play Trover on a flat screen, it was designed with VR in mind. While the game itself is essentially the same, the way players interact with the world is entirely different. Roiland hopes players who opt for a traditional play experience will fall in love with Trover and give it a try in VR.

“I say go back in VR and hang out in those moments,” he urged. “It's so cool. You're immersed in the world. You're there. It's these characters talking. The audio mix is really good. It's a really unique thing in VR. One of my favorite things about VR is transporting yourself to another world, being able to explore, taking your time a little bit more.”

Whether you opt for VR or flat-screen, PS4 or PC, Trover Saves the Universe, is shaping up to be a hilarious adventure that tracks with Roiland’s past work while also allowing those who might have trouble with vulgarity or gore to optionally soften the experience. If the first taste of the game (due May 31 on PS4 and June 4 on PC) is any indication, we’re in for a laugh-filled adventure. Just make sure you don’t have a nasty cough before loading it up.