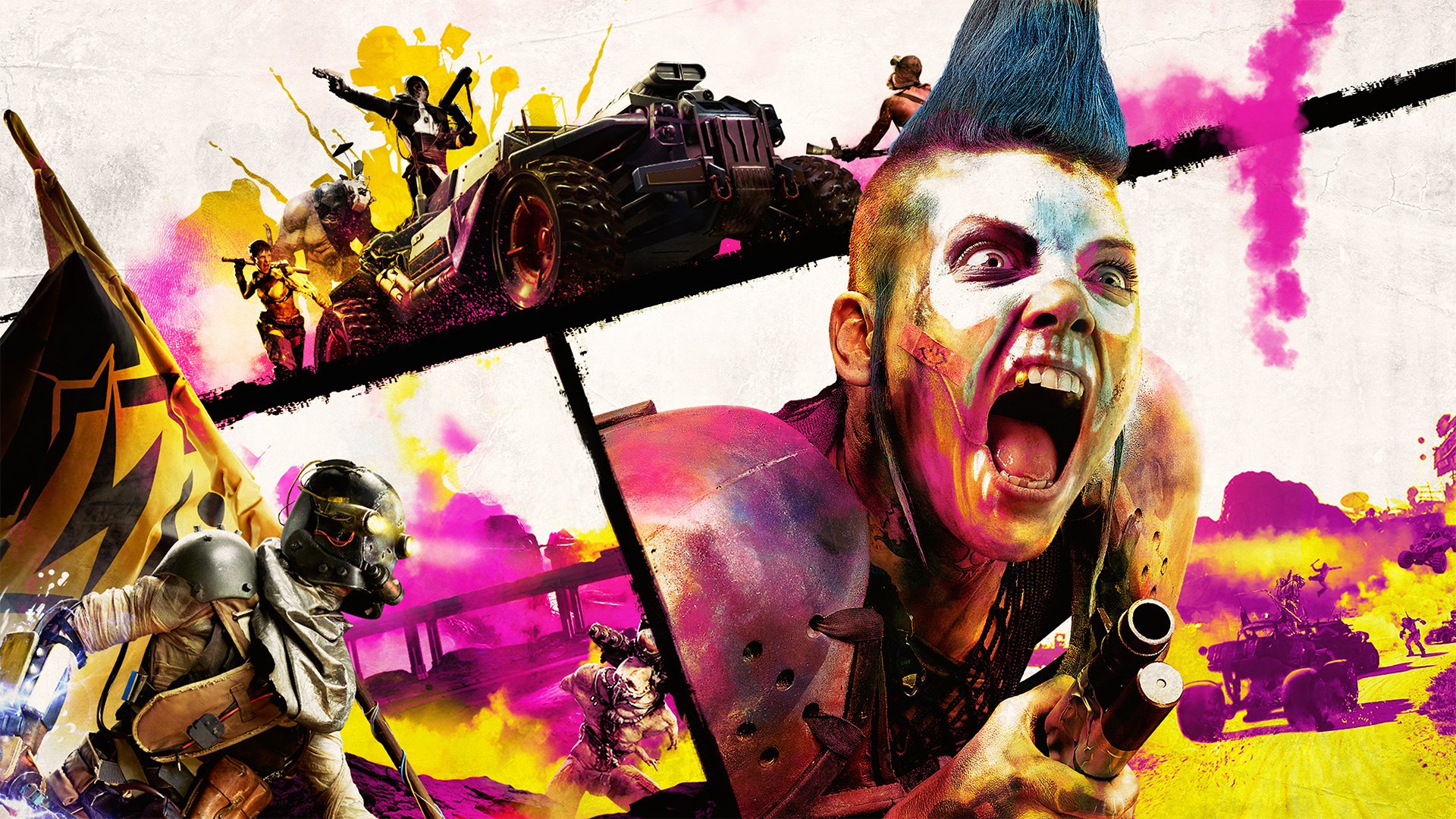 Editor's Note: At GameDaily, our coverage has been limited to analysis on the game industry, looking at the issues that matter to industry professionals across a variety of disciplines and presenting them with context. We're experimenting with a different kind of game review that mixes criticism, analysis, and commentary from the studio.

Game criticism and industry commentary aren't often found in the same place at the same time. It takes an even-hand to pull together a review (or preview) of a game, especially because all art has its flaws. We've combined our review of Rage 2 with an interview with the game's director, Magnus Nedfors, as our first foray into this very different form of criticism.

More than many recent high-profile game releases, Rage 2 is steeped in legacy. It carries the weight of both FPS greatness and open world know-how thanks to a teamup that, on paper, looks picture perfect. Avalanche Studios and id Software bring their respective expertise to this ambitious sequel that, for the most part, delivers on the promises made by their combined heritage. It’s not without its faults, but Rage 2 is a satisfying open world shooter that revels in chaos and tight gunplay.

"We have had a great collaboration with Tim Willits and the team at id [Software]," Magnus Nedfors, game director on Rage 2, told GameDaily. "Me and Tim … shared the initial views about what to keep and what to change [from Rage]. [We wanted] to keep some of the characters that were great in the first game, so you can meet them again. We wanted to improve the world, [which] is why we wanted some time to pass between the games -- to allow the world to evolve. Rage 2 is set about 30 years after the events of the first game. The first game had some limitations when it [came] to [building] an open world, so adding in the Avalanche open world magic was not very hard."

There’s not a lot of preamble to Rage 2; after a short tutorial segment, you’re dropped into a post-apocalyptic open world with a gun, a car, and three mission objectives. What you do next is up to you. The entire playable area is available from the get-go, and you’re free to explore in any direction you want. It's almost overwhelming at first, but clearing camps and gunning down goons abated any apprehension. Soon, there was only a deep desire to keep shooting bad guys.

"In the beginning of the project, we were given total creative freedom to propose what we wanted to do with the games world setting and narrative," Nedfors explained. "We proposed our ideas before id showed us anything what they had in mind. When we presented our vision, many things turned out to be similar to theirs so we merged our visions [and] took what we thought was best from both and worked form there."

The gunplay in Rage 2 is some of the best in the business, which shouldn’t come as a surprise given id’s pedigree. Guns feel weighty and responsive (with sound engineering to match), and mowing down wave after wave of enemies is nothing short of genuinely satisfying. The arsenal begets variety in how you approach any particular gun fight, too, with clever weapons ripe with creativity. Layer on a handful of superpowers, such as a shockwave slam or a vortex bomb, and you’ve got an enormous combination of killing tools at your disposal.

Nedfors explained that this level of gunplay was possible because of id's prodigious pedigree with first-person shooters: "We [were able to] use the experience of the Gods of First-Person Shooters to add the feeling of a true id Software [FPS experience] into the game. The result is fantastic [and] both studios have learned so much from each other."

This variety turns each combat encounter into a playground where you’re encouraged to experiment. There were examples of attempting to clear enemy strongholds with only traps set by the Firestorm Revolver, or using a Grav-Dart on a handful of enemies to shoot them into an explosive barrel. It’s these moments where Rage 2 absolutely shines.

All this shooting and killing contributes to a combo system, which culminates in an Overdrive ability that sees your killing power and health regeneration greatly amplified. At the start of the game, Overdrive only lasts a few seconds, but pump some upgrade points into it, and it’s not impossible to keep it going for several minutes at a time, causing you to frantically search for more enemies to kill before it runs out. It’s hectic and a heck of a lot of fun.

Nedfors' approach to building out that level of fun in Rage 2 didn't come at the cost of his team, either. He proudly and "boldly" told us that Rage 2 did not crunch in what he called a "traditional view." Nedfors is referring to crunch that ensures that workers feel threatened by not working overtime, even if it's not officially mandated.

"As most companies (maybe not all, but most) in the industry have matured, [we've] realized that crunch is not a tool you should rely on at all," Nedfors stated. "Yes, we have had periods where people work more than the standard hours for a limited time but it is very controlled and everybody does it willingly and get compensated with time off. It is easier than you think [to avoid it]: just don't accept it as a tool and you will learn that in all your planning.

"Also, I don't think you gain much by working 10+ hours a day for a longer time, as you get worn down. [If you] come to work well rested and work hard and effective for a full day, you will get the job done. When you add [more] work hours to that, you get tired and uninspired and you get sloppy and create more problems."

Rage 2's director was adamant that crunch is not something that workers should have to endure, just because management didn't plan for the worst case scenario(s) during the development process. Part of that development process was working through how to approach an apocalyptic wasteland without covering everything in a variety of browns and taupes and dusty siennas.

"We all wanted something new, and we are pretty sure the players would like to see something new as well," Nedfors said, when asked about Rage 2's approach to color. "So, we brought back something we loved from before: the more colorful post apocalyptic settings from comics in the '80s and started there.

"We also wanted to change the tone in general, so we thought of it as [the] post-post-apocalypse, where civilization had some time to settle and the most fundamental problems, [such] as food and water, are solved and the people of the wasteland have had some time to restore life in the world. With adding some time in the story between the nature had some time to evolve and this adds more color to the world."

Unfortunately, even with Avalanche's invigorated approach to color in Rage 2, the wasteland is somehow a drab and listless place, despite the prospect of dozens of activities to check off. Even with a wide range of biomes and environments the world feels dull. The problem is that there are only a handful of different types of activities, and you’ll find yourself cycling through the same ones over and over again. You can only destroy so many sentry turrets and clear so many bandit camps before repetition begins to set in.

The dialogue is repeated often, too, and became nothing more than white noise after enough hours. This shallowness extends to the characters as well, who all possess bland personalities and names that aren't particularly memorable.

On the bright side, the dullness of the world and characters speaks to another of Rage 2’s strengths: its sense of progression. Everything you do contributes to your character’s growth in one way or another. Neurotic interfaces, Ark Tek cores, life glands, weapon core upgrades, vehicle parts--there exists an abundance of things to collect in order to make killing stuff more fun. Rage 2 appears to have four distinct character skill trees, 11 “Nanotrite” abilities to augment, six item categories you can upgrade, and eight weapons, each with their own upgrade paths, and 16 different customizable vehicles to collect. There really are a staggering amount of things to find, which makes trekking across the boring world very much worthwhile.

Avalanche spent serious time and effort in building Rage 2 from the ground up, opting to leave the past in the past and create from scratch, instead. Nedfors wanted the world to feel as expansive as possible, so it was necessary to wipe the slate clean and start fresh with Avalanche's open-world engine, Apex.

"We had a fantastic support from people at id Software," Nedfors said. "With that [level of] support, we avoided so many mistakes that would have cost a lot of time and headaches. What we have done together is create a true Avalanche open world game with full player freedom in an id Software [FPS]."

The most attractive carrot on the proverbial stick is visiting the many Arks scattered around the world. Each Ark houses a substantial character upgrade, such as a new super power or weapon, and they can be visited in any order. The prospect of a new ability is always exciting, and does a lot of the motivational legwork.

The glut of upgradables saw me become a nigh-unstoppable powerhouse by the end of the campaign. Bullets had almost no effect as tapping into Overdrive was the most effective vehicle for killing enemies. In other games, this might be seen as a balance issue, but Rage 2’s modus operandi is to give as much power to the player as possible and let them go to town. And, well, they certainly succeeded in that venture.

Rage 2 may have a dull world and hollow characters, but the combat carries enough weight to outshine the narrative frustrations. Even after completing the campaign, the gameplay loop is satisfying enough to warrant a return to the wasteland to keep checking icons off the map. It may not be the next big open world hit, but it’s a great time filled with loud guns and big explosions. This trip to the apocalypse is absolutely worth it.

GameDaily received a copy of Rage 2 from Bethesda for the purposes of this review.