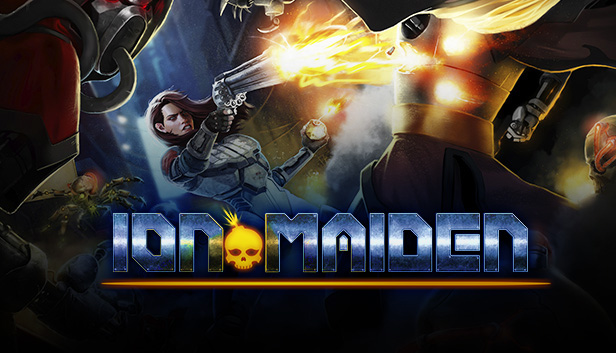 Update (July 11, 2019): Ion Maiden is no more. 3D Realms announced today that the game has been re-titled as Ion Fury. While there have been no additional filings in the court case, 3D Realms CEO Mike Nielsen issued a statement explaining the change.

"After careful consideration, we’ve decided to rename our first-person-shooter 'Ion Maiden' to 'Ion Fury,'" he wrote. “A lot of thought went into this, but most importantly it would be a disservice to our loyal fanbase and the fantastic developers, to drag out a long lawsuit. The amazing gameplay, interactivity and pure fun, is what makes Ion Fury a great game. Not the title.”

Ion Maiden Fury will be out of early access on PC on August 15. Xbox One, PlayStation 4, and Nintendo Switch versions will be along later.

Original Story (May 30, 2019): 3D Realms’ early access shooter, Ion Maiden, has landed the developer in hot water for being a bit too tongue-in-cheek.

The metal band Iron Maiden has filed a $2 million lawsuit in United States District Court, Central District of California. The group is still performing and selling merchandise, and has accused 3D Realms of using the band’s popularity to boost attention and sales of its game. (You can read the court filing below.)

Iron Maiden’s suit is, in part, based on its own foray into video games with 2015’s Legacy of the Beast (a turn-based RPG). Additionally, the band asserts that Shelly Harrison (who was also the main character in 3D Realms’ Bombshell) is a play on Iron Maiden founder and songwriter Steve Harris.

The group also claims that Ion Maiden’s logo (using what it calls a “steel-cut font”) and one of the icons in the game is similar enough to Iron Maiden iconography and will cause confusion. A look at the logos reveals that while the font might be similarly stylized, they are most definitely not the same.

“The lawyers have attempted to draft the logo and font into the question, but if you actually look at the two, I don’t, as an outside observer, see infringement on trade dress,” attorney Richard Hoeg of The Hoeg Law Firm told GameDaily. “Different coloration, different font—take a look at the Os in particular. It just doesn’t rise to that level for me, but reasonable minds could conceivably differ.”

Despite that, Hoeg thinks that the case is likely to survive a request for dismissal, but it’s not airtight. Attorney Brandon Huffman, founder of Odin Law & Media and Hoeg agree that alternate meanings of the term “iron maiden” as a medieval torture device may support 3D Realms’ case. Both also suggest that the case isn’t a cut-and-dry overreach.

3D Realms had indication that a lawsuit might be in the offing. According to the court filing, Iron Maiden sent 3D Realms a cease-and-desist notice. Following that, the complaint states that 3D Realms “abandoned its Ion Maiden trademark application but chose to defiantly continue to use its Ion Maiden mark.”

The complaint also identifies specific elements of confusion in the marketplace. Specifically, the filing cites coverage of Ion Maiden that include references to the Iron Maiden name and that all the game is missing is an Iron Maiden soundtrack. Additionally, Exhibit A of the complaint includes search engine results that intermingle Iron Maiden and Ion Maiden entries as evidence of confusion.

“Everything that 3D Realms might have used to hint at or imply that Iron Maiden had something to do with making the game could go to an infringement case,” Hoeg said. “I’m not sure such a statement rises to that level, and a clever attorney could argue that the absence of such a soundtrack makes clear that Iron Maiden is not involved, but a judge could disagree.”

The challenge with infringement suits is that they are often entirely subjective. And even if 3D Realms prevails, it may have a long road ahead.

“Their biggest issue is that they have been sued, and it’s not immediately obvious that it is frivolous,” Hoeg said. “That means it’s unlikely to get kicked out cheaply, and they may have issues even commercializing the product while this action is pending. If copyright is also implicated at some point in the future, we could get into issues similar to those we saw earlier this year in respect of Stardock, Star Control, and the DMCA. My best guess as to the history here is that Iron Maiden attempted a ‘shakedown’ letter for some licensing money once Ion Maiden was brought to their attention, 3D Realms evaluated the complaint and found it wanting, and Iron Maiden wanted to make clear—to others as much as 3D Realms—that its threats were not idle ones.”

Iron Maiden’s Legacy of the Beast game is likely to be a major factor in this case. In many instances, bands register their name for uses related to music and related merchandise. However, Iron Maiden registered its name specifically for “downloadable computer games” in November 2018 (three years after Legacy of the Beast was released for iOS and Android).

The game-related trademark appears to have been filed as a precursor to the lawsuit. While the registration doesn’t make the case a certainty for Iron Maiden, Hoeg says that having it could lead to a larger damage award in case of a court victory.

For its part, 3D Realms does not seem intimidated. The company issued a statement today on Twitter that indicates it will stay the course for now.

We’ve recently heard about a lawsuit filed in California by the band Iron Maiden, claiming our old-school first-person shooter Ion Maiden (@Bombshell_Game) is infringing on their trademark.

From what we’ve heard, the suit claims our main character Shelly Harrison, originally debuting in 2016’s Bombshell, is based on their musician Steve Harris; our skull bomb icon found in-game is based on their skeleton mascot Eddie; our logo in itself is based on theirs; and other frivolous claims anyone who has played Ion Maiden would find more over the top than Shelly’s “Loverboy”, her signature 18-round triple-barreled revolver.

We at 3D Realms, our co-publishers 1C Entertainment, and developer Voidpoint will review our options once we receive official notice of the lawsuit and will make any necessary decisions at the appropriate time.

Regardless, everyone continues to work diligently on Ion Maiden to deliver the best possible experience later this year.

Unless this is thrown out, it will either be settled privately or in the courts. And given the subjectiveness of the law and strengths in both parties’ cases, there is no way to predict which way the gavel may fall.

Ion Maiden Lawsuit by on Scribd