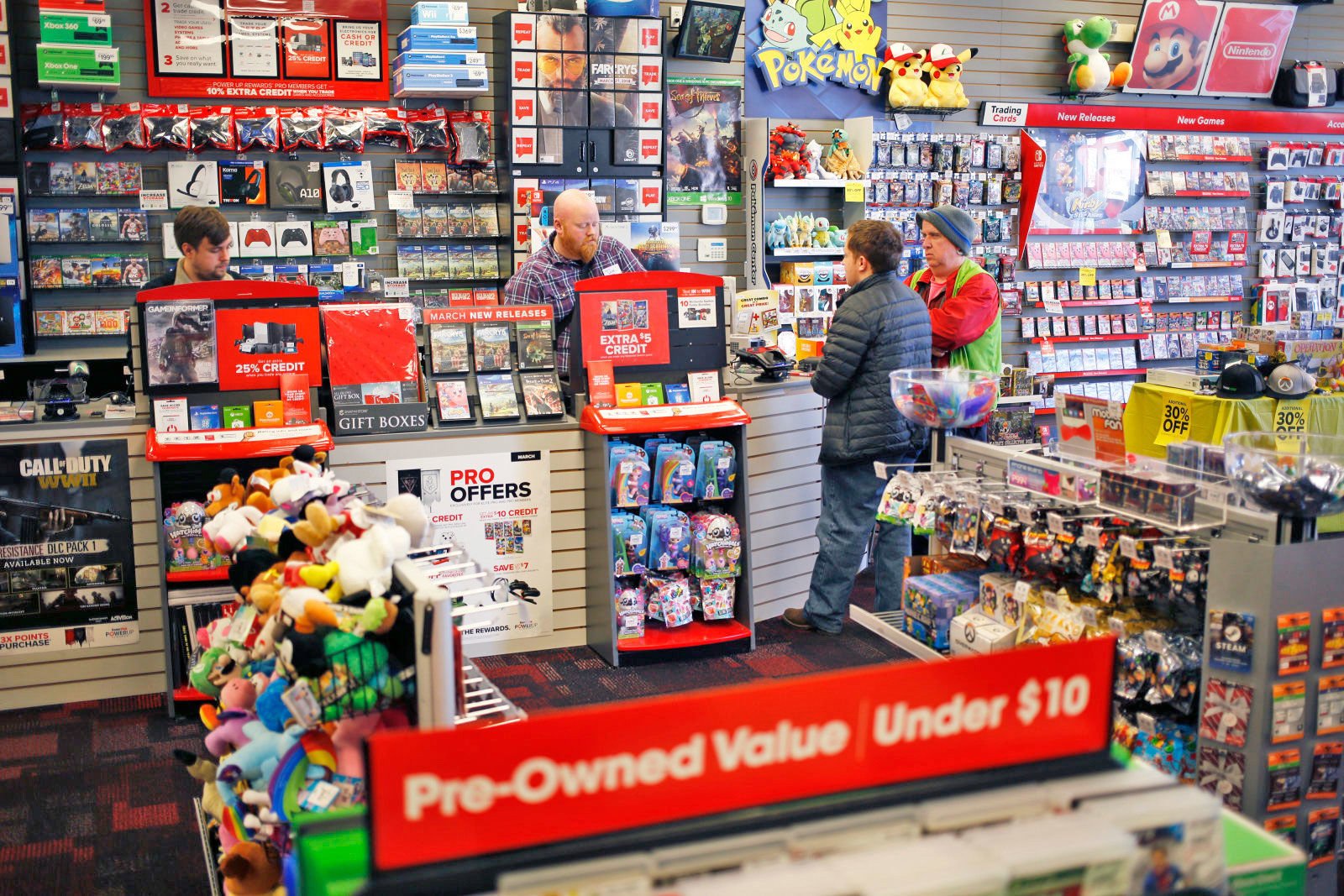 Update (6/14/2019): At E3 2019, GameDaily received more details on the ThinkGeek layoffs. Approximately a dozen employees were laid off as the brand prepares to merge its operations with GameStop corporate. Layoffs impacted website operations, buyers, and marketing. ThinkGeek has now posted more information on how its brand sunset will be rolled out.

Update (6/7/2019): Following our story, a source contacted GameDaily with information that GameStop has laid off ThinkGeek's remaining marketing and website administration staff. The company moved quickly after communicating during its June 4 earnings call that it plans to sunset the ThinkGeek brand (see original story below).

"GameStop recently announced that it is engaging in a strategic business transformation initiative to build the GameStop of the future," a GameStop spokesperson told GameDaily via email. "As part of this company-wide effort, we have made the decision to reorganize our ThinkGeek business by streamlining the operations of our ThinkGeek.com ecommerce platform and transitioning it within our GameStop.com omnichannel platform.

"We have a very successful pop culture and collectibles business, and this business decision represents our continued focus on growing that business through harnessing the power of greater efficiencies and strengths within our global teams.

"We will continue providing our ThinkGeek fans access to their favorite pop culture products through our gamestop.com ecommerce platform, or in one of our more than 3,700 GameStop stores or more than 40 ThinkGeek stores."

In a follow-up email, GameDaily inquired about how many employees were affected and whether any ThinkGeek business unit employees were spared. GameStop did not respond by publication.

GameStop has been trying to figure out how it fits into a post-physical media world since the start of the current console generation in late 2013. Attempts at realignment have involved selling mobile devices in its stores, a heavier emphasis on collectibles, and a recently announced a plan to restructure its stores to be gathering places and open an esports facility in Frisco, Texas.

Net sales for the company’s first quarter of fiscal year 2019 fell short of analyst expectations by $90 million, sending the share price into a tailspin. It dropped 35% yesterday and the fall continues today, with the stock price lower than its been since 2003 (under $5 at publication). The stock was listed on the New York Stock Exchange in 2002.

GameStop’s net revenue was $1.55 billion (down 13.3% year-over-year). Operating income (a key measure of efficiency) dropped 70% to $9.8 million. Profits also declined sharply to $7.5 million (down 63%). The company did beat its estimated break-even or loss guidance on earnings per share, which came in at $.07.

Newly minted CEO George Sherman attributed the fall-off to end-of-cycle declining hardware sales (down 35%). Software was also down, but not nearly as sharply (4.3%).

The biggest hit to GameStop’s financials is also the core of the company’s business: pre-owned sales. Used game transactions tumbled by 20.3%, with Sherman explaining why that principal aspect of the business is no longer nearly as relevant in this console cycle. Universal day-and-date digital releases that began this console generation has been a financial gutshot for the company.

“I think if you look at the pre-owned business, there's going to be some carry-over, some of the same challenges that the core new gaming business has with digital,” Sherman said during the June 4 earnings call. “But in addition to that, historically, the place has been based more off the supply and demand as opposed to on a clear value proposition on the price of a new game versus a use game.”

GameStop used game pricing is typically only a few dollars lower than the manufacturer’s suggested retail price (MSRP) of that same title still in the shrink wrap. Sherman is aware that the retailer will need to completely revise how it positions new games, as supply is no longer an issue in a market shifting heavily to a limitless supply of digital copies accessible without going to a brick-and-mortar location.

“And we think I'm pretty on there, it has to be... clear rationale for buying the pre-owned games,” Sherman said. “So that's what we will talk about when we think in terms of pricing strategy around pre-owned is what is that guaranteed benefit look like for the customer and how do we hold the line on that, so there's always certain value.”

As digital became more prevalent at the start of the Xbox One / PlayStation 4 console generation, GameStop attempted to shift part of its business by selling digital codes at the register. This helped, but recently, Sony has taken a shot at retailers. The platform holder has decided to disallow retail sales of full-game download codes. DLC and in-game currency codes will still be offered.

GameStop has been slowly losing ground, leading it to take a number of major financial steps to cut costs and stop the bleeding. In 2017, the retailer sold its Kongregate browser game portal to MTG for $55 million. In 2018, the company sold its Spring Mobile retail chain for $700 million.

These are all one-time fixes that are part of the strategy for getting GameStop back on track, but they can’t (and aren’t) the entire plan. Sherman is assembling his own team, as long-time executives depart. Most recently, chief operating officer and chief financial officer Rob Lloyd announced his departure.

Sherman pointed out on the call that collectibles are a profitable focus for GameStop, with margins increasing to 32.7%. The growth of the retailer’s focus on knick-knacks and toys has led to congestion in retail location footprints. As part of its recovery plan, the overloaded shelves and floor displays will be revisited.

“I believe we can leverage and improve the store experience,” Sherman said. “Conceptually speaking, we know that 20% of our SKUs drive 80% of our business. Space allocation, therefore, is a near term opportunity. We need to declutter our stores and focus on the key SKUs that are driving our business. We also need to ensure that we have the proper inventory levels and merchandising behind those SKUs.”

GameStop’s 2015 acquisition of collectible e-tailer ThinkGeek has been a smart investment for the company. However, with a larger focus on collectibles in GameStop retail locations and greater presence on its website, the company has identified that it is duplicating efforts.

While not outright declaring a plan to layoff staff, Sherman identified that there is a plan to phase out (or at least minimize) the ThinkGeek brand. Instead, the collectible business will be centralized on the GameStop website.

“We currently have redundant teams and redundant web properties,” Sherman explained. “So, there is the separate thinkgeek.com platform, as well as all the GameStop omni-channel capabilities. What we’ll do with ThinkGeek is produce a redirect. So we’ll be leveraging off the GameStop platform to still have a presence for ThinkGeek, and still have that brand at least initially, while we consolidate the backend operations. There's redundancy between collectibles and ThinkGeek that we can run more efficiently.”

Additionally, GameStop will be in a position soon to make big changes to how its stores are located throughout the territories in which it operates. The company closed the quarter with 3,777 stores in the United States and another 1,912 internationally. There are another 101 collectible stores around the world. That number is down by about 1,000 since the start of the console generation.

GameStop has signaled that the number could very well continue to shrink in the coming years. “[Our] current average remaining lease life for our video game stores is approximately two years, which gives us tremendous flexibility to manage our footprint,” said outgoing CFO Rob Lloyd.

The retailer also made the decision to immediately halt shareholder dividends. Sherman explained this as a move to “sure up the balance sheet.”

GameStop’s liquidity is currently dropping. The company’s current ratio (a measurement of liquidity in the short-term) has dipped from 1.89 in this quarter last year to 1.48. Typically, a ratio from 1.2 to 2 is considered good, but executive leadership’s comments about the balance sheet are an indication that there is concern.

The company is also looking at ways to improve performance that don’t require extensive financial outlay. This includes a focus on high-margin products, improving customer experience, and shifting used game sales from a supply-driven model to a price-driven one.

Analysts are seeing the current situation as GameStop’s swan song. Financial analysts are watching the company “burn to the ground” with a valuation that has been “nuked.” Others see the decision to eliminate the dividend as a sign that management has no faith in the company’s ability to maintain cash flow.

Sherman and his new leadership team have a hard road ahead. The company is starting to enter dangerous territory previous tread by UK game retailer GAME in 2012 when publishers stopped extending credit to the company. That meant pre-orders couldn’t be fulfilled and some new releases simply couldn’t be stocked.

GameStop has a chance to pull out of its tailspin with the birth of a new console generation. The retailer is a major destination for new hardware, which can’t be acquired digitally. It needs to make it to holiday 2020 though, when new consoles are likely to launch.

Sherman clearly has steps in mind for what would be a miraculous GameStop turnaround, but investors aren’t buying in yet. As the share price slides and confidence wanes, the road to holiday 2020 just gets longer.